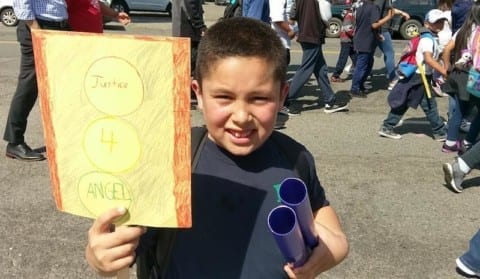 “Since 1996, more than 75,000 migrant deaths have been recorded globally,” (MIGRATION DATA PORTAL)

That means that 75,000 people who look for a better life have been killed. However, not all migrant deaths happen at the border but happen in Oakland and our neighborhoods too. For instance, the case of Alma Vasquez and her 6-year-old son Angel Garcia who tragically died in a hit n run on April 13, 2019. Because they are immigrants, many people ignored this tragic death, everyone was very nonchalant about it. This is a crime and a problem.

Based on the research the Oakland community should focus on its recent deaths and why specifically the deaths are happening to immigrants. It is a problem because the crime that involves immigrants affects the majority of the Latinx community, especially in Fruitvale, which causes trauma to the whole community and immigrants to be unfairly stereotyped.

As a result, the community was left with some trauma, not only parents and teachers but the students who also attended Angel’s school. Think about when the kids found out about the incident and didn’t see him at school the next morning. The community was greatly impacted by this and not a lot of people knew about it so it was a big impact that the community had dealt with this. For instance in this trauma sheet that I found it was mentioning the symptoms and how someone can develop having trauma and It connects to what could’ve happened or what has already happened to the community.“The Adverse Childhood Experiences (ACE) Study, an observational study of the relationship between trauma in early childhood and morbidity, disability, and mortality in the United States, demonstrated that trauma and other adverse experiences are associated with lifelong problems in behavioral health and general health.”(Understanding, Preventing and Healing Traumadoc)  To add on, our peers could suffer from really dangerous mental health because of this situation. It was so unexpected, And it doesn’t show but a lot of people were affected by this incident. “They said they need to do studies, but what do they want?” Guevara says. “These are the data points right here. Two people have been lost. Their lives are gone. That’s your data point. Do something.” (WIRTSCHAFTER t) Words of one of the neighbors who saw the incident happen. One can realize even more that the community wasn’t going to feel the same anymore.

In no disrespect to the family or any of their friends but in a way this incident helped the community know that there was something that had to be done.  However, other people weren’t even aware of the woman and her son passing and it was a really big deal in the community. Yeah, it was on the news but now who listens to the news? Oakland personally had to find out through social media a couple of days after the incident because we never listen to the news. Other people who were informed of the incident helped the community a lot. For instance, the principals of the school Angel Attended to were trying to collect signatures so that there could be a traffic light and there to be no more accident “The principal at Angel’s school, Eleanor Alderman, and Laura Guevara at the laundromat have been collecting signatures for a traffic light at Foothill and 26th(WIRTSCHAFTER   )”.This made no changes! To this day there aren’t any traffic lights. There are only cones placed in the middle of the road to indicate that other people are crossing, but even now people have knocked them down and ignored them.

To conclude, to this day no one has made any differences in this incident. It’s almost as If the whole Oakland community forgot about this case; the community feels apathetic towards the family and their friends. The school where the child had attended to hasn’t mentioned anything about their family and forgot. The Oakland community should have put more interest in the incident but in this case, what can our community do? In a few more months this case would just be history.

Wirtschafter, Eli. “A 6-Year-Old and His Mom Were Killed Crossing the Street. This Oakland Community Wants Safety.” KALW, 14 May 2019, www.kalw.org/post/6-year-old-and-his-mom-were-killed-crossing-street-oakland-community-wants-safety#stream/0.

This resource is credible because it immediately gives me the information I was looking for. It’s credible because it answered all of my questions and doubts about my topic. It also comes from a news page so It legally has to be accurate. This information was also very accurate and it informed me way more than what I was initially looking for. The reason this source exists is because it’s a news article and it had to inform us about what has been going on in our Oakland community.

Hey Johana,
I really enjoyed reading your post. I completely agree with you that something needs to be done in order to address this problem. I believe that the Latinx community is not only ignored here in Oakland but also in other places in the United States. Immigrants and people of color are often ignored when it comes down to this type of crimes. Throughout the years theres been protests because of this and even then sometimes it’s hard for the community to get a response from the authorities. I believe that with the technology we have today, by using it the right way, we can bring this issue to light and have others support the cause and make a change to support the latinx community.

As an immigrant, I want to thank you for taking the time to write about this important topic. I enjoyed reading this very much and I feel heard.

I like how you incorporated statistics so that the readers can have a clear visual image in their heads about the issue. I also like when you discussed about trauma being one of the outcomes. Not a lot of people understand the tough challenges that immigrants face underneath the surface.

I like to think that Oakland is a relatively diverse area, so it was quite saddening to read this post. Can you imagine what immigrants would struggle with if they live somewhere else far less diverse than Oakland?

You added some positivity under your post regarding this heavy subject. It helped restored my faith in humanity while all these horrible things are happening. When a person in a community suffers, everyone suffers. We as a whole need to do better if we ever want to progress as a collective and lower these statistics.

I think you bring up some great points in your blog. I am wondering if there are any other reasons you believe the community cared less about this death than others? I am also glad to see that some members of the community are working on gathering signatures to petition the lack of safe lights in the community. You could follow up with letters, emails, or even phone calls to local elected officials (mayor, council members, assembly members, or even members of the school board).

I also love how you made a connection to students social and emotional health due to incidents like this in the community. I think providing that data to others can be a really powerful way to get adults thinking about how their decisions or lack of decisions is impacting youth.

Thank you for writing this blog!

Dear Johanna,
I think your post was captivating important things that happen in Oakland because you are stating facts like how people just ignore what’s going on in their community. A line that stood out to me was”this incident helped the community know that there was something that had to be done” because people only want to accept something bad is happening when something terrible happens. I agree with your point because the community has to make sure that terrible things aren’t happening to the community. Thank you for writing your blog, I think if people read it then would stand up and have justice

I think that what you are saying here is very important, after all our country wouldn’t be here without immigrants and we owe so much to them. People who have moved here to escape poverty or injustice in their own country shouldn’t have to risk their lives and then be put in even more danger in the place they dreamed of escaping to. Just because someone is different than you does not mean that their life matters any less than yours and should be treated fairly. Here is another article you should read that is talking about the same things you are and wanting to make difference in all our communities, https://justiceforimmigrants.org

Thank you so much for reading my blog. I wanted to address what you said when “People who have moved here to escape poverty or injustice in their own country shouldn’t have to risk their lives and then be put in even more danger in the place they dreamed of escaping to.” The reason is that I want more people to know about this incident so we can prevent these things.