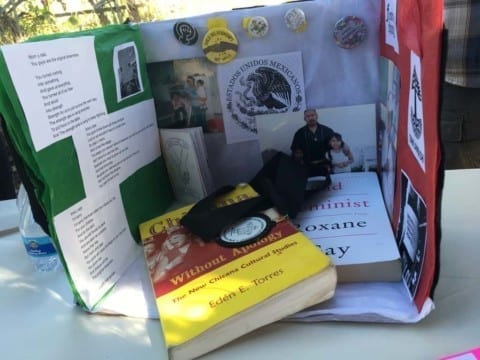 When people look at me, they are only seeing what the stereotypes created by the dominant narrative taught them to see. They see a young Latina who is expected to stay silent and stay down. This isn’t true which is why I decided to represent my counter narrative and what my identities actually represent through my shadow box. On the inside of my shadow box, I included two books, a poem I wrote, and a zine (small magazine that can be about any topic) I created to show my chosen identity of being a writer. Including this was very important to me because it shows that my gender identity and race don’t stop me from having big dreams and wanting to be successful. Something else I included was a Latina Honor Roll medal I received last year because it shows that no matter how Latinx people are expected to fail or be less than, we consistently defy those expectations. Being Latina is an assigned identity but also something I am very proud of. Another identity I chose to represent is being a daughter of immigrants. I included pictures of my parents to represent the gratefulness I hold in my heart for all the sacrifices they made for my sisters and I. Who my parents are and everything they have accomplished are a big part of my identity because all the goals I achieve are a way of saying “thank you” to them. My identities are something I take comfort in but they are also the identities people make assumptions about, and judge me for. The outside of my shadow box represents this which is why I included pictures and words that represent the colorism, machismo, sexism, and racism I face. They show the struggles and obstacles that come with the same identities I take pride in but don’t define me. Overall, my shadow box represents the multiple sides and stories to who I am. They are representations of the chapters of my story and of my life.

I really liked the books you put in your box and how you included poems. I think is amazing to have acknowledged and be grateful for your parents and the sacrifices they have made to give you a better/good life. I too do everything in the name of them to one day hope to “pay” them back for all of the work, time, money, and sacrifices they have made for my brother and me to live and thrive in the U.S.. Stereotypes will always be there but I can tell that you are a strong, young woman who will be going far in life. I like how you aren’t going to stay silent or down because of how the world wants us latinas to be. I am not a big writer, but I am a big reader and I know that you will be successful in this life and not let your race or gender identity define you. You are so much more than what you can put on paper. There will always be people and things that will try to bring you down but the fact that you are young, resilient, and aware are all qualities that are hard to break through.