Journey from Drop Out to Graduate

Home Journey from Drop Out to Graduate 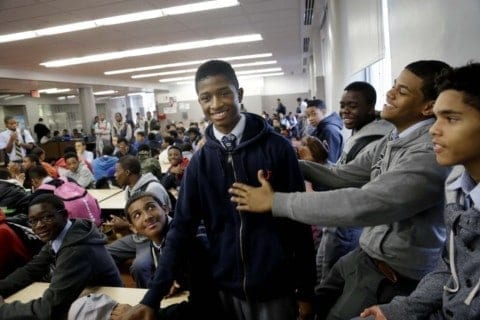 I ended up in pulse for numerous reasons . I made a lot of mistakes in my old school that led to my decision in transferring to P.U.L.S.E. High School. And now I’m a very different young man . I matured a lot over time and i’m taking the steps I have to so that I will graduate on this June . I realized that there is nothing in the streets for me and that at the end of the day you are born alone and will die alone . Those people i were doing these things with moved on in life and left me behind so i had to do the same and change my ways so that i could be successful .

I was letting the wrong crowd of kids influence me to do things that I shouldn’t have been doing . One time for example a group of boys from my school wanted to go to another school and fight . I didn’t really want to go because i knew it would be the wrong thing to do but i let a couple people influence me to go . They were telling me if i didn’t go that i wasn’t loyal and that i was scared so i forced myself to go even though i knew it wasn’t the right thing to do .

I was cutting school to do other things that weren’t contributing to my success with temporary people . One of them was cutting to to smoke and party with females. It would be like 8 in the morning, and I would call Jon, “What up, Bro.” He would respond like “ What up let’s dub school and get high i got these females pulling up.” I would always say yes and that’s what we would do all day . We would stay in his or my home all day and smoke with females trying to get with them .

When I did go to school I wasn’t doing anything at all . Just walking around the hallways cutting class in the bathroom being a follower .  When a teacher would tell me stop talking and so what i was told to I would disrespect them . That always got me kicked out of class, almost everyday i was being kicked out of class so i would just walk around the halls doing nothing wasting my time . Or i would tell them that i was sorry and that i was gonna do my work but when they walked away i would continue doing nothing and that cause for a lot of teachers to give up on me because they got tired of trying to help someone who didn’t want their help .

I was also in a all boys school which people say are better because there’s no distraction with females but there are many others also . Everyone knows how boys could be very immature and like to play all day . So that another reason I was here wanting to be the class clown doing dumb things and look cool around my friends . That was also a big reason i used to get kicked out of class for trying to be funny . Most of the time i would have the whole class laughing and i was considered to be disruptive and a distraction so i was kicked out .

I ended up failing almost all my classes for about 2 years in a row . The first time around i was scared that my mom would find out so every time our teachers would give up our report cards i would automatically rip them up and throw them out . After my mom would find out i would tell her that i’m gonna do better and be better she would punish me for a while and i would still do the same thing .  The second time around she got tired of it along with my father and they were gonna send me to military school . I convinced them to give me another chance i was telling them about an alternative school they didn’t really get the concept . I told them what my guidance counselor was telling me and they believed me that i would finally change . So i interviewed for P.U.L.S.E High School got in and now i’m here about to graduate in a couple weeks .

My mother was giving up on me and I was on the verge of dropping out . My father and guidance counselor kept speaking to me and motivating me to do better and be better . I had a couple of options but i chose to go to an alternative school . I liked P.U.L.S.E the most so i came here go accepted and this had been the best thing i’ve done so far . I’m graduating this June and i finally gained my mother and father’s trust again . When i say i’m gonna do something they believe me which is a great thing because trust is a big thing in my family .