This shadow box represents me because I chose to bring in objects that represented my identity as much as possible. My Ethnicity is Salvadoran and Mexican, my Nationality is American, and my Race is Hispanic. Now I’m gonna go into detail on why I added the objects I put in my shadow box and what they represent. The bridge is more of a decoration but I also put it because I really like the views of the Golden Gate Bridge and it’s just very nice to go there. I chose to include all the tickets that I added on the background because I got them when I went to L.A and San Diego with my family and I had a really good time. The graduation ticket represents an achievement because it was really nice seeing my family proud of me and I was proud of myself. I added the dance invitation because it was really fun that day and I got to spend the day with my friends and I really care about friends. I really like the sticker on the right because it’s really true and powerful. It says that women are strong and I really agree with that because most people assume the opposite. On the left I added a Disney character from the movie “Inside Out” and her name is Sadness I also added a little Eiffel Tower bracelet. I added Sadness because I wanted to show the dominant narrative about it because people assume that women are always emotional. I added the Eiffel Tower bracelet because someone close to me brought it from Paris and gave it to me. The pictures are about my childhood and I added a picture of my my brothers and me  because I feel like family is very important. 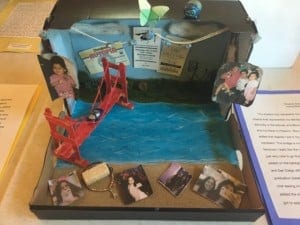