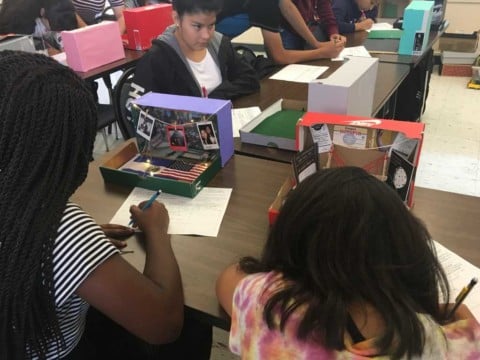 I have chosen to include an El Salvador flag because I’m proud of being Salvadoran as my Ethnicity even though my Nationality is American. I decided to put both flags on the bottom because they have both affected me because my race is Hispanic and there are a lot of stereotypes for us. Also, the American flag has affected me because I am a person of color and people may think that I wasn’t born here. I’m still proud of being both. The Oakland museum ticket represents a counter narrative that Latinos work extremely hard for example my sister works at the Oakland museum and she works hard so she can support herself and me. The baby pictures that on the bottom are pictures of the past. The past have really affected me in the inside and the outside by the actions I would make. I would get in trouble, get sent to the office on a daily basis, and just have a really negative mindset. I put a collage of all of my friends and I. They were the people who helped me from making those mistakes. The two people who helped me the most were Grady and Melody, my two best friends. Also, my sister, Hilda, because she knows what I’ve gone through and she felt the same way so she has helped me a lot. I put in fairy lights to show that even if things may be dark there’s always a light. The polaroids that are hanging from the string are memorable events that I will always remember and will be a part of me. 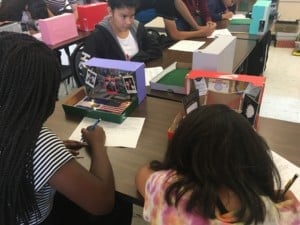 Dear Jennifer,
I am feeling really connected with your writing, “Jennifer shadow box” because even if I’m not Salvadorian, I get affected too just by being Hispanic. Now that I see that I’m not the only one makes me feel connected towards others. One part of your writing that stands out for me is where you talked about being born here but people assume that you aren’t. I think this is a very good point to put because a lot of people assume different things, just because the way you look, where your roots come from, how you talk etc. Another part that I liked is where you talk about having a really hard time and that your two friends and sister helped you. This stood out for me because all the people I know go through that too, and get help from the people who knows them the most. Your writing reminds me of something that I made once. One time I got to say that I’m dangerous because I am Mexican and people from Mexico kills people. Also been told that all Mexicans bring drugs, it was said of President Donald Trump. I know that being other than whites with privilege we as a community have to stand up together and help each other and make these stereotypes go away. I just want to say thanks for your writing. I look forward to seeing what you do next, because I feel that you’ll make a change and help others who are going through the same thing as you get to have a better life.

Dear Jennifer,
I am amazed with your shadow box because it is very creative and has a lot of objects that catch my attention. Some objects that stood out to me from your shadow box are your houses. They catch my attention because well it was very creative to make little houses and add them to your shadow box but also their seems to be a big story behind each house which I think was a cool way to represent those stories with each little house. Those little houses aren’t just any other houses and I can connect with you because I understand how those houses really have a story to tell. My family and I have had to move houses several times and in each house that we move to it does not really stay behind because there is also those memories that stay with us, whether memories may be positive or negative they always stay with us. Thank you for sharing your shadow box with us. I look forward to seeing what you make next, because you seem to have a lot of creativity and you have a lot of cool ideas to share your story with us. -Elizabeth

Dear jenny
my name is melody, I am a freshman and currently attend life academy. I really enjoyed reading your shadow box statement. there were lines in your article that I felt I could connect to. when you stated that, The” two people who helped me the most were Grady and Melody, my two best friends. Also, my sister” because the two people that supported me were Jennifer, Grady and my sister. I cant wait to see what you post next.
best, melody

Dear Melody,
I’m glad that you enjoyed reading my shadow box and that you can connect it to your life. For future comments please make sure to capitalize and read over your work thanks.

I love love love how you know the difference between ethnicity and nationality. It’s something that most people don’t understand and have it very confused which is understandable but it’s amazing that you know.I agree that being a female of color comes with struggles. I agree identity as xicana a term that is growing in population but its still not that liked people or some people just believe i’m being extra for not calling myself hispanic or latinx like i’m “supposed” too. The lights ideology really made me smile. Yes, their is always some light even when you see mostly darkness and i’m glad to hear you have support. Value that because it’s truly important for those dark moments.