Jack and the Beanstalk Remixed

Home Jack and the Beanstalk Remixed 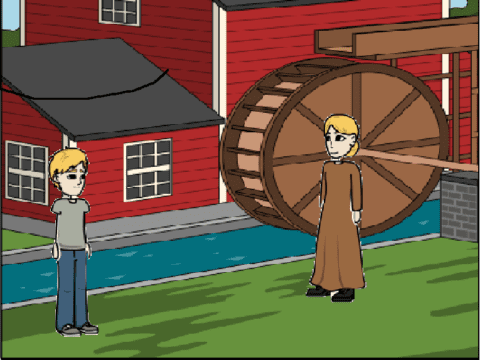 Hey youth voices! Welcome to my project(scratch) for Jack and the BEANSTALK!! Through this post, I’ve done storyboards, a script for the whole story of Jack, and a final animation. I know, you see a whole bunch of others like mine in the TOP 25 featured discussions, and I guarantee you mine will probably be like them all, so this might just be tedious. But, I hope you like what I’ve done, cause I’ve done two separate ENDINGS(TELLTALE GAMES?) Hope you enjoy!

So this is my script. It’s pretty simple, I summarized the story of Jack and the Beanstalk before the MAJOR decision he makes(ACTI) and created two endings from there. Jack chooses not to buy from the tradesman on the road to the market, causing him to go to crazy adventured around town(ACTII/ALTERNATE ENDING). Jack buys beans from a tradesman, which creates a huge beanstalk that he climbs(ACTII/ORIGINAL ENDING).

This is the script

These are my storyboards. Note how they’re different from the script because the storyboards are just summaries. They don’t reveal the full picture…or the animation. The first storyboard is ACTI, or the part before Jack buys/rejects the tradesman. From there, the second storyboard shows the consequences of his actions, good or bad. The storyboards are not what the animation fully is, you know that looks can be deceiving.

(Go use STORYBOARDTHAT.COM if you haven’t already) 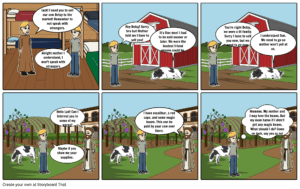 Finally, the Final ANIMATION(ta dum tssk). Anyway, this is my animation. It starts off with Jack talking with his mom, and then with his cow(talking cow… this is the work of pixie dust). Then Jack obviously meets the tradesman, where you choose whether Jack says Yes or No to the tradesman. Yes- Jack climbs the beanstalk and then runs away from Giants, making him rich after stealing from them. No- Jack meets Red Riding Hood and Stix(Small world), and then eventually sells his cow to a contest. The cow fails:(. Other than that, that’s my animation!