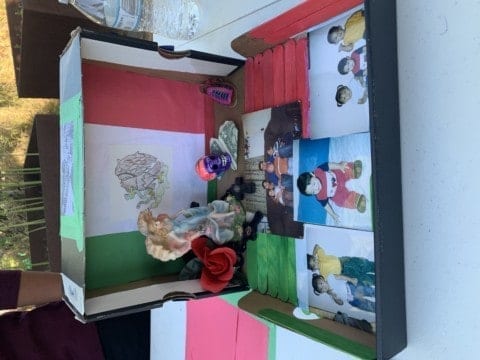 This shadow box represents how people view me on the outside and how I really am on the inside. The objects in this shadow box represent my true self. When people see me they think of me of a person who can potentially be dangerous or someone who is up to no good, that’s what people assume of me because of my race, or my assigned identity, which is being an immigrant/Mexican. But that is not the full part of me. The Mexican flag and the virgin mary that I put inside my box represent my chosen and somewhat assigned identity because I chose to believe in god and his mother but I also had the choice not to believe in that. But I did not choose to be Mexican even though I didn’t choose, I like to represent myself as a latino/Mexican because now I know how strong we can be. As an immigrant im often told by others that I should go back to my country and that this place would be better without us. I have noticed that many people expect more on Male bodied people and since my gender identity is male, I am expected to behave in a certain way at school. Me and other male people also are expected to get a good job to maintain the woman we will have one day. That’s just how our society/nationalities expect us to grow up. But I think that all women can take care of themselves and I know, and they know that they don’t need someone to rely on. The counter narrative that i hope to represent with this shadow box is that not all Mexicans are how Trump described us to be. And that any Male and Female person can be themselves and not have to grow up how our society is expecting us to grow, and that we all have a choice of who we want become.

Hi Ivan, my name is Jennifer and I am a student from San Jose State. I really enjoyed seeing and reading about your shadow box, I could tell you put a lot of thought into it. I loved how you mentioned equality between men and women since that is something a lot of males don’t talk about. I also liked when you said “ But I think that all women can take care of themselves and I know, and they know that they don’t need someone to rely on.” This showed that you believe in equality and don’t let what society tells us be what you believe. I appreciate you bringing awareness to topics that aren’t always discussed and standing up for what you believe! I enjoyed learning more about how you are in the inside.

Hi Ivan,
My name is Maria. 🙂 I can’t find the correct words to tell you how amazed I am by your Shadow box. The message behind it is so powerful and it’s very refreshing to see that young Mexican males are breaking through the idea that a woman must rely on a man. As a daughter of immigrants the sentence “The counter narrative that i hope to represent with this shadow box is that not all Mexicans are how Trump described us to be.” really hit home for me because with Trumps depiction about immigrants the media sometimes forgets that there is another side of the story, the reality of the life most of us really live which is a having a family and working hard. We aren’t the monsters Trump makes us out to be and in my opinion your shadow box does a great job at showing that. I love that you speak about the fact that you didn’t chose to be Mexican but you chose to identify yourself as Latino/Mexican. It demonstrates how much pride you have in your background. Your shadow box itself is beautiful, it really shows a much more intimate look into your life and it almost feel more like your personal treasure box because it contains things that are very valuable to you!

I am really surprised by the work you put in, your shadowbox really makes me feel empathetic for who you are and how you were raised. It contained a lot of color and items that look as if you have shown a lot of interest in this project and how it plays out. I am really interested in the pictures you put in that really show you growing. Something that really stands out for me are the images of you as a kid, they showed me what it was like to grow up as a male in your family. I also love how you talk about trying to break society’s rules to be able to set your own rules. I loved how you said ”Me and other male people also are expected to get a good job to maintain the woman we will have one day. That’s just how our society/nationalities expect us to grow up.” (Guerrero) Shows how you are aware of what is going on with today’s society and sexism. Really also shows that you don’t like to act that way because you talked about how you are just expected to grow up like that because you are a man.

Hi, I am Mayu Wise from San Jose State University. I am very impressed by your shadow box and how much meaning you have put into it. It’s made really nicely, and I love how you put your pictures in there as well with your family. But most importantly, the meaning behind it is very inspiring. I could really tell that you are strong and independent, and I am glad that you and your family keeps the Mexican culture with you, as well as not crumbling down from the society’s expectations. Also, I am very appreciative of you for saying, “But I think that all women can take care of themselves and I know, and they know that they don’t need someone to rely on.” Great job on your shadow box, and I hope you can accomplish your goals and become the person that you want to be!