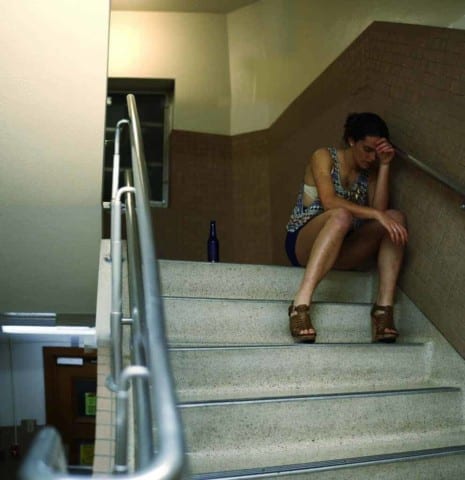 Gone With The Wind is one of the best books in American literature–that’s something that’s pretty much undisputed among avid readers in our country. And not only is it a great work of literature, many can remember falling in love with Vivian Lee during the movie version, with her green eyes and dark hair. Rhett Butler and Scarlett O’Hara are one of the most prominent literary couples, right up there with Romeo and Juliet, Eleanor and Park, and Harry and Ginny.

However, even through their well-developed relationship, there is a darker underlying theme…it seems that Rhett’s not giving a damn goes just a little too far in their physical relationship. As it is seen multiple times during the movie and book, he is both physically and verbally abusive to Scarlett at many different points. And how are they possibly still so “perfect for one another?”

It’s certainly not because they’re married.

It’s certainly not because what he does is consensual based solely on the fact because they’re married.

Rape is an act of violence–not an act of love, sex, or desire. Unless, of course, that desire is to act violently. Consensual sex is something where both partners are alright with the act that is occurring–rape is when it is non-consensual. Rape can lead to sexual injuries and dangerous situations and is usually used as an act of dominance against another person.

Marital rape is something that is currently being debated in the United States–large numbers of people from all across the nation are debating on whether marital rape is really considered “rape”. Some believe that violent and non-consensual sex is alright once a couple is married. Personally, I find that it is still an act of violence and should therefore still be illegal. Is domestic violence okay? Is verbal abuse okay? I don’t think so. And if rape is an act of violence, even the marital kind should be illegal.