“Its not about the money”

Home “Its not about the money” 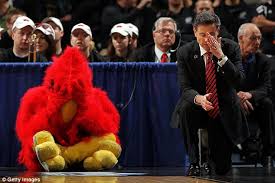 November 22, 2017 is the day where 5 star recruit Brian Bowen was told that he can’t ever play for the Louisville Cardinals again, or should I say “begin to play”. This whole money scandal first came to light on September 26, 2017 when the FBI started there search onto the Louisville Cardinals head coach Rick Pitino, Rick had been in contact with Brians dad and a agent at adiads about threading money to the family. Under NCAA regulation “Amateurism requirements do not allow:

This act did violate NCAA rules so in result they banned Brian Bowen from ever playing basketball for the Louisville Cardinals(Note: he could still attend the college and play for another team). All of this did not happen until a few months before when he committed to the team through a twitter post on June 3, 2017. In Brian Bowen defense he claims that he didn’t know of any money of sort was being thread to his family, all because reports say that his dad was the mastermind behind the scandal; he was the one who was collecting money from adidas and head coach Rick Pitino. Bowen hopes that his claim will support his new reinstatement of eligibility at the college of South Carolina Gamecocks, Bowen was recently admitted there and is in high hopes to play for the team next year for the 2018-2019 season as a Freshman because he actually never played with the Louisville Cardinals. Bowen dreams of playing basketball are at reach still because the 6’7 19 yr old Forward was an McDonalds All-American in 2017, his talent and work ethic will be proved to the College Basketball world next year.

Bowens incident sparked a huge investigation over multiple colleges such as University of Arizona head coach was under huge fire, but was later proved innocent. No other colleges were found at fault except Louisville, other investigations look as if they are hitting a dead end. It is very important for the NCAA to keep on top with these regulations because choosing a school to play a sport at should not be based off of money, but off of culture and program interest. When a college is offering an athlete money to pocket-verses scholarships-it uneven out the playing field of recruitment; such as Arizona, Creigton,Depaul, Michigan State, North Carolina State, Texas and UCLA missed opportunity on this amazing athlete. I hope that the rest of Bowen basketball career is not affected by the incident because the kid really just wants to play basketball, he has stated that he is excited to work with the Gamecocks program, which is most important.

Nice write up Ethan. This is an issue that seems to come up yearly ass college athletes are punished for not abiding to the NCAA’s strict set of rules. It seems crazy that for all the work they put in it can all be taken away so quickly. Whether or not college athletes should be able to be paid is a tricky subject, but it doesn’t seem right to take away all that they’ve worked towards for one violation. It’ll be interesting to see how college sports move forward in the years to come, and what changes will come.

Here’s an article analyzing some of the benefits and drawbacks of paying college athletes:
https://www.huffingtonpost.com/entry/college-athletes-getting-paid-here-are-some-pros-cons_us_58cfcee0e4b07112b6472f9a