It Is So About Race

Home It Is So About Race 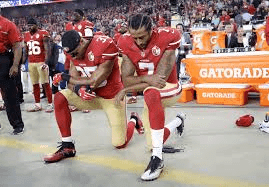 Many home are divided on this topic. People can fully disagree with their own family, friends, colleagues, and neighbors. Americans are actually giving something to start an argument: anyone should be able to take a knee during the National Anthem.

The First Amendment: Congress shall make no law respecting an establishment of religion or prohibiting the free exercise thereof; or abridging freedom of speech, or the press; or the right of the people peaceably to  assemble, and to petition the government redress of grievances. Although this sounds boring it’s a very important thing to consider in the issue of the protests. The vice president left a football game. He was upset with Americans protesting. So then, he protested.

Posted on VoteVets Twitter account “Jerry Jones and Donald Trump are 2 billionaires that never served trying to lecture us about patriotism. #TakeAKnee”

There are extremists on both side of the argument. People should not be shamed for kneeling. Football players are people with beliefs too. It is not to shame the National Anthem or veterans, but to raise awareness the same way wearing pink raises the same amount of awareness. There are many veterans that will take a knee that have went viral on various social media sites. One particular one is a tweet by Brennan Gilmore (@brennanmgilmore) of his grandfather, a WWII veteran taking a knee. The tweet reads, “My grandpa is a 97 year-old WWII vet & Missouri farmer who wanted to join w/ those who #TakeaKnee: “those kids have every right to protest.” Veterans like him fought for the right to take a knee, not to be pressured to take a knee. If you are truly patriotic, you aren’t in the military to be worshipped.

Darryl Strawberry told CBS Sports that he believes when they have the jersey on, they are a different person. He basically said that your beliefs shouldn’t be displayed on the field. It’s understandable why he would say something like that, but at the same time you should not drop your beliefs for a job. If you are in the spotlight like that, it is more the reason; a responsibility; to raise awareness.

People may say that it’s a waste of time and football should just be football. What would you do if you had the opportunity to get your voice heard for something to believe in, but not use it?

In most cases, most people who do not support taking the knee are just flat out racist. It’s a scary thing to witness in this world; especially in this day and age. The reasons for taking a knee (multiple reasons) are: black people being mistreated, the banning of muslims, and people just flat out disliking Trump. In the midst of it, no one is causing any harm. We have a right to take a knee.

Alexandra, I definitely agree with you when you said that “anyone should be able to take a knee during the national anthem” because it is protected by the first amendment. I also agree that there are extremes to both sides, both of which need to be taken into consideration. You might find this article helpful: http://deadline.com/2017/10/nfl-anthem-protests-continue-as-owners-dither-trump-agitates-fans-act-1202192702/ . I look forward to reading more from you on this topic in the future.

I completely agree that taking a knee is a part of freedom of speech and that shouldn’t be taken away from us. While researching more about this subject I came by a video of former President Barak Obama saying “Freedom of speech is easy to protect when you agree with it, but it’s the hardest to protect when you don’t agree with it but we must still protect it.” I believe that’s why so many people (including our president ) feel that the people kneeling should be fired or something is because they don’t agree with it and due to that they feel that it shouldn’t be allowed. Which I believe is complete nonsense since we all have the right to an opinion no matter who does or doesn’t agrees with it.

I totally agree with your argument. There is no reason that people should be angry that people are kneeling as a form of peaceful protest. My biggest issue is that the people who get riled up about this, including Trump, did not get as riled up about the Neo-Nazi riots in Charlottesville. This shows how deep-rooted racism is in this country. I like that you quoted the whole First Amendment, it is great evidence and support for your argument. I suggest maybe using the idea of the flag code and how hypocritical everyone is for being angry at people taking the knee, when they break the flag code all the time: http://www.scarymommy.com/twitter-thread-respecting-the-flag-hennywise/ I hope you expand on more issues of race in your next posts. Good job with this post!

Your point on this case is very clear and well-written: We, including (and maybe especially) football players have a right to protest. You utilize examples to defend your case very well, from the Constitution to Veterans’ twitter accounts, and your counter-example, Darryl Strawberry, is used to effectively further your position. After a little research, I found that the NFL does not require – though it does encourage – players to stand for the National Anthem as a part of the procedures manual before a game (see http://www.kansascity.com/sports/spt-columns-blogs/for-petes-sake/article175221581.html). Finally, I think you did a very good job walking the fine line between the ability to exercise a right, in this case free speech, and requiring someone to do so. Thank you for your post! I am looking forward to your next one.

I completely agree that everybody has the right to take a knee. It is up to you to decide how to interpret the symbolism of the flag and the anthem. I think it is great that football players are using their high platform in society to show that we have a lot of problems in our country that we need to address.