I Stand with Angela

Home I Stand with Angela 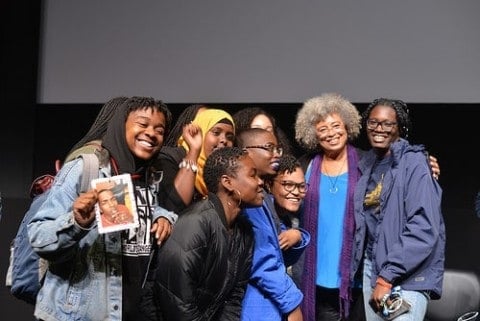 ¨Angela Davis is an activist, educator and author. She is the author of eight books and has lectured throughout the United States as well as in Europe, Africa, Asia, Australia, and South America. Davis gained her international reputation in the early 1970s, when she was tried for conspiracy and imprisoned, and later fully acquitted, after being implicated in a shootout in front of a California courthouse. As a member of the Advisory Board of the Prison Activist Resource Center, Davis focused on exposing racism that is endemic to the US prison system, and exploring new ways to de-construct oppression and race hatred.” In 1969 Angela Davis was hired by the University of California  at Los Angeles (UCLA) as an assistant professor of Philosophy, but her involvement in the Communist Party led to her dismissal.  During the early 1970s she also became active in the movement to improve prison conditions for inmates. That work led to her campaign to release the “Soledad (Prison) Brothers.” The Soledad Brothers were two African American prisoners and Black Panther Party members, George Jackson and W. L. Nolen, who were incarcerated in the late 1960s.”

She was nominated for the Shuttlesworth  Human Rights award which was supposed to be handed to her  on February 16th at its annual gala, but on January 26th the decision was made for her not to receive  the award. Some may argue that Angela Davis does not meet the requirements to receive the Shuttlesworth Human  Rights Award because, she became known for her involvement in a politically charged murder case in the early 1970s,  however, she was acquitted. We must look at her work as an activist. She fought for her rights and beliefs as a black woman, a battle influenced by her segregated upbringing in Birmingham, Alabama.

Davis, so moved by the deaths of the four girls killed in the bombing of Sixteenth Street Baptist Church in her hometown in 1963, that she decided to join the Civil Rights Movement. By 1967, however, Davis was influenced by Black Power advocates and joined the Student nonviolent Coordinating  Committee (SNCC) and then the Black Panther Party. Ms. Davis sacrificed a lot for the movement-her job, her reputation and even her freedom.   President Nixon congratulated the FBI on their “capture of the dangerous terrorist, Angela Davis.” When she was finally acquitted of all charges in 1972, she later shared, “This is the happiest day of my life.”

We need to consider the statement that she made on in the Guardian, “I have devoted much of my own activism to international solidarity and, specifically, to linking struggles in other parts of the world to US grassroots campaigns against police violence, the prison industrial complex, and racism more broadly. Also she states “The rescinding of this invitation and the cancellation of the event where I was scheduled to speak was thus not primarily an attack against me but rather against the very spirit of the indivisibility of justice.”

In all honesty, Angela Davis deserves the award not only because she was one of the most influential  people in the Civil Rights Movement (CRM) but also she was a phenomenal African American Hero who said her support for Palestinian prisoners is consistent with her support for political prisoners in other parts of the world. The activist said she will appear at an alternative event in Birmingham in February “organized by those who believe that the movement for civil rights in this moment must include a robust discussion of all of the injustices that surround us”. Angela Davis advocates for equal rights and justice for all regardless of skin color.

Great article. This seems kind of similar to the work Bryan Stevenson has done https://eji.org/bryan-stevenson