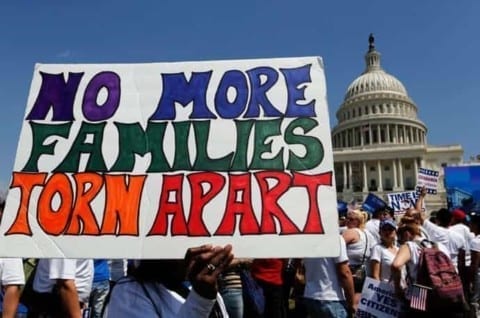 America faces many issues that needs to be resolved immediately. One thing that matters to me most is Immigration; Immigration is the international movement of people into a destination country of which they are not natives or where they do not possess citizenship in order to settle or reside there, especially as permanent residents or naturalized citizens, or to take-up employment as a migrant worker or temporarily as a foreign worker. I feel that people move somewhere else because they have a dream they want to achieve or in hopes of their families living a better lifestyle. Migrating to America is the number one place people may come to in hopes of looking for a job, a better lifestyle, or even getting away from potential danger. Immigration to me means that you’re a dreamer and you want something more for yourself. I feel that it shouldn’t be difficult for people to migrate because we are considered free but why are there things we have to go through in order to do that? For example, most people have to cross a border in order to get to the other side and I feel there are pros and cons to this. Pros are that it is helpful for safety issues so they can know who is coming to America and a con is that not all of them are able to cross the border and it’s not right because they might be getting away from danger.

As I was doing some research I came across a young boy at the age of 11 who was discovered by Border Patrol at the Mexico/Texas border. After he was found he died moments later at the Mexico/Texas border due to dehydration. I had learned that prior to this the young boy’s parents had wanted him to head North in hopes of a better life. Crossing the border is more difficult than we may think, Immigrants have to go through blistering summer heat, dehydration, and exhaustion. They also have to deal with criminal smugglers and being taken into what is called a “stash house” where they are hidden and given little food and water.Getting the expenses is very complicated because not all families have the money in order to do this which causes them to have to wait and struggle in their bad lifestyle until they can obtain the money.  Immigration is wrong is some ways because they are not allowed to do everything we as Americans are able to do. As Americans we are able to vote, get good paying jobs,and get passports. I feel the laws of Immigration should be changed because it’s not right that people have to go through so much just to get to freedom and that they are still not allowed to do the same things as legal americans so how are they free? Immigrants are motivated to leave their former countries of citizenship, or habitual residence, for a variety of reasons, including a lack of local access to resources, a desire for economic prosperity, to find or engage in paid work, to better their standard of living, family reunification, retirement, climate or environmentally induced migration, exile, escape from prejudice, conflict or natural disaster, or simply the wish to change one’s quality of life. Another downfall is that families are unable to receive work permits since they are entering the United States illegally.Immigrants must watch everything they do and follow certain rules or else they can be detained at any time which I feel is unfair. Immigrants are being separated from their families in this place we call “America”, it is not right because they have come long ways in order to be free and live in a better life to make something of themselves. We need to come together and help day by day with resolving issues in order to make America great again.

I am very interested with your post, “Issues of Immigration,” because I am Mexican American which means I was born here in the United States, but the same can’t be said about most of my family, friends, and neighbors. Because of this I know how difficult it is for immigrants to move somewhere new, away from family and away from their native language. For example the culture shock one might get from moving to a state like California where you are not only presented with one new language but multiple, due to its diversity.

One sentence you wrote that stands out for me is: “I feel that people move somewhere else because they have a dream they want to achieve or in hopes of their families living a better lifestyle.” I think this is important because this was the exact reason my family decided to move here years ago. See like most immigrants they came for the American Dream, where there were various more opportunities.

Thanks for your writing. I look forward to seeing what you write next, because we have similar options (in this topic specially). I’m also quite interested in the rest of your opinions and seeing your point of view.