Island Story – A trip to China 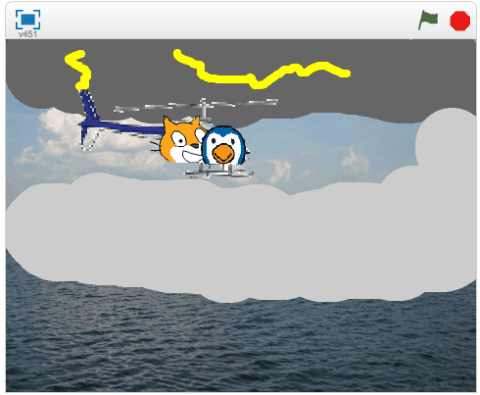 This is an animation created using Scratch. This story is about a cat and a penguin stranded on an island. Sample of some Scratch code: Penguin (Pengu): Are you sure we should be flying over the Bermuda Triangle, at night, and in a snow and lightning storm?

Cat (Curio): Sure, of course! As long as someone else is driving, we’re totally safe… I can’t wait to get to China!

[There is a pause, lightning strike, and the helicopter shakes violently]

[Screen slowly whitens and reveals a beach backdrop, with both Pengu and Curio lying together.]

Curio: Of course, why not? Think positive. I lost a life, but I’m otherwise unhurt. You on the other hand, landed on ME, killing me and saving YOU.

Pengu: Now what?? We’re stuck here forever! And our pilot’s nowhere to be found!

Curio: Go on and complain, I’ll go look around in the island we’re on and take note of our surroundings.

Pengu thinks: I won’t be surprised if he lose a few more lives. After all, he is very curious. And as always, curiosity kills the cat.

Curio: Hmm… where can I find some food?

[Curio the cat leans down and picks up some coconuts)

Curio: These are so heavy! Better bring them back to show Pengu.

[Curio walks slowly back to Pengu, (Backdrop changes to afternoon backdrop) who is sitting there glumly]

Curio: I found some coconuts! Want some?

Pengu: You can’t open them.

Curio: Of course you can.

[Curio smashes the coconut in the sand a few times. Nothing happens]

Curio: Don’t be so pessimistic, we’ll find a way.

[Curio walks over to a rock while Pengu watches. Curio smashes the coconut and water pours out]

Oooh! Water and Coconut meat! Never tried this before!

[Curio starts eating and drinking, and Pengu walks over]

Pengu: Hey, umm, I know I was being bad, but… can I have some please?

Curion: Of course! My pleasure!

[Curio smashes another coconut and gives it to Pengu]

Curio: Do you think sand is soft enough?

[Both lie down and backdrop changes to night. Screen darkens, then backdrop becomes day Curio wakes up and wakes Pengu in turn]

Curio: Are you sure?

[Curio walks into the jungle]

[Walks over to tree and shakes it. Avocados fall]

[Growling and screeching is heard]

[Backdrop switches to the beach, where Pengu is thinking thoughtfully. Three pieces of driftwood have washed up]

Pengu: I’m starting to admire this island. Maybe this curiosity is good after all!

[Curio comes running out of the jungle, followed by monkeys]

Curio: P-Pengu, th-the there are rabid monkeys chasing us!

Pengu (thinking): Guess curiosity is not that good after all.

Curio: We need to defend ourselves! Grab those pieces of driftwood!

[Curio and Pengu face away from the camera as two monkeys approach. Using their driftwood, they block the attacks]

[Curio turns around with an evil face and and grabs the bird, who tries to fly away, but falls in the ocean with Curio. Pengu is still trying to defend himself]

[As Curio and the bird fall in the ocean, a shark swallows them up]

Pengu: that serves him right!

Pengu: Annnd… all his lives are gone.

[Overhead, a military helicopter comes over and shoots the monkeys, drops down a safety ladder, and Pengu is rescued]

[The helicopter flys over the ocean in a sunset]