Islamophobia: A 12-year old’s take on it.

Home Islamophobia: A 12-year old’s take on it. 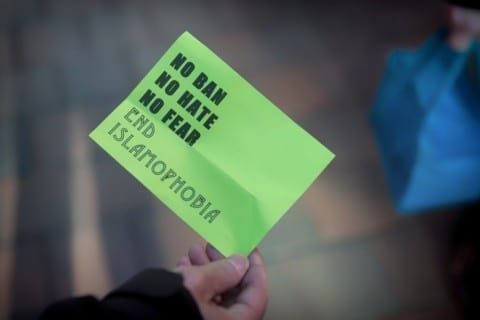 It’s astonishing how it is the 21st century and groups of people are still being discriminated. A popular example of hatred towards a group of people is the Muslim ban, where people from Muslim majority countries couldn’t travel to America. It’s clear that Islamophobia is still prominent, as media portrays Muslims as terror raising, savages.

While my story isn’t as extreme as those who have been physically attacked for being Muslim, these events have left trauma within my mind. Growing up I heard a bunch of media generalizing Muslims as terrorists and things about hate crimes. This one event struck actual fear into me as it had occurred in a place I frequently visited. Someone was mistaken for a Muslim and was pushed into the train tracks. This left me always being weary whenever my mother would near the platform edge of the subway.

Another day in fourth grade, I was walking home with my mother who wears a headscarf when two white men driving in a jeep cursed out my mother and called her a terrorist. This opened my eyes and made me realize that Islamophobia is still really prominent to even be exposed to such a young girl.

Dear Humira:
What you say is very true today. I agree with your important article, “Islamophobia: A 12-year old’s take on it.”, and people should try to realize that few Muslim people are actually terrorists. Most are hard working, middle class citizens. One sentence you wrote to convince me was when you wrote “Someone was mistaken for a Muslim and was pushed into the train tracks.” This showed me how serious the situation is. People tried to kill someone because of how they looked. I agree with your claim about stopping discrimination because it is affecting the lives of innocent people and children. People should attempt to realize that most Muslims are good people.

Dear Humaira :
I am proud with your article,“Islamophobia: A 12-year old’s take on it.,” because it explains in a nutshell what many people have been trying to point out, and you wrote it in just the correct way for your message to be heard (in my opinion).

One sentence you wrote that stands out for me is: “It’s astonishing how it is the 21st century and groups of people are still being discriminated.” I think this is important because no matter how much the world progresses, stereotypes about people will always remain.

Another sentence that I reflected upon was: “It’s clear that Islamophobia is still prominent, as media portrays Muslims as terror raising, savages.” This stood out for me because no matter what people may say, no one can deny its truth. When a terrorist is not Muslim, their religion doesn’t seem to matter that much, but when a Muslim is a terrorist, that seems to be the only relevant fact about them. People do not realize that Islam is peaceful, but the image is being ruined by people who take it to a whole other level, becoming extremists, which aren’t good in any religion.

Your article reminds me of something that happened to me. One time I was walking with my best friend and her mother, all of us Muslim, ready for a fun day at the playground. A man walked by and started talking about how bad Muslims were and how they were immigrants and terrorists. I was so upset I turned around to him, but my best friend turned me back around, trying to get that bad experience out of our minds.

Thanks for your writing. I look forward to seeing what you write next because I feel that you will always speak out about what is right, not giving up for any reason.

I certainly agree with your argument. Many have been discriminated against. I believe we should stop this foolishness.