Is Your Cellphone Draining Your Intelligence?

Home Is Your Cellphone Draining Your Intelligence? 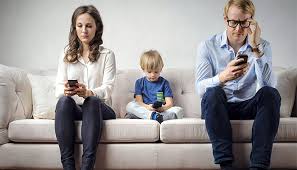 In the article, “Are smartphones Making Us Stupid?” there’s a debate between two technology experts Andrew Keen and David Weinberger based on how phones have affected us. Mr. Keen believes that smartphones are making us stupid because most of us don’t use them smartly. We have technology on our hands but don’t use it for learning purposes instead invest our time on social media tweeting about our lives. On the other hand, Mr. Weinberger believes that cellphones don’t make us stupid as they have made a great impact on society.  “Never in history have we had so much access to ideas, information, and creativity.” Having the access to our cell phones allows us to learn more information surfing through the web and communicating with others as we gain new ideas.

Personally I think cellphones are a big distraction as sometimes we are connected more to our electronics than the real world around us. This has led to less social human interaction because we can now communicate with others through our phones whether it’s from social media or a text message. I think I can live without my phone because I just use it for entertainment purposes, but it’s important to have in case of an emergency. Although there are other people that rely on their phones at all times, and in some cases, it’s even an addiction.

Do you think we should limit ourselves from our cell phones?

Dear Yamile
I am very interested by your post, “Is Your Cell Phone Draining Your Intelligence?” because you brought some interesting information that caught my attention. One sentence you wrote that stands out for me is: “Never in history have we had so much access to ideas, information, and creativity”. The thought that our generation is the first generation that has access to such advance technology is crazy. Cell phones are such a useful tool and is probably the only one you need in most situations. Another sentence that I found interesting was: “Personally I think cellphones are a big distraction as sometimes we are connected more to our electronics than the real world around us”. This stood out to me because I’ve been noticing an increase of cell phone usage from everyone due to popular apps like Tik Tok or Snapchat. People would rather have quick and easy entertainment than meaningful interactions with the people around them, and I don’t blame them. Great post Yamile.
-Alvaro

Dear Yamile:
I am fascinated by your post “Is Your Cellphone Draining Your Intelligence?” because the usage of cellphones has really skyrocketed recently and that is a huge impact on our society. There are many pros and cons of cellphones, it really depends on how we use them.
One sentence that stands out to me is “Although there are other people that rely on their phones at all times, and in some cases, it’s even an addiction.” I think this is true because many people spend lots of hours on their phones, watching people live their life on social media. Whereas others use it to benefit themselves in intelligent ways.
I look forward to seeing what you write next because this really opened my eyes to how we use our phones. It also just made me think about the wasted time I’ve spent on my phone when I could have been doing other things.
Ricardo

Yes, many may argue that social media is bad for us because of the amount of time we spend on it. What others don’t see though, is the information we view on social media. For example, Mr. Weinberger states that, “cellphones don’t make us stupid as they have made a great impact on society.” I agree with this because recently many have used social media to spread awareness of issues around the world. Without this resource, us, teens, wouldn’t have known about the realities in society.

I think phones are a big distraction but do not decrease our intelligence. I also think they are very helpful. Phone helps us look up words we don’t know really fast, and we are able to contact friends or teachers when we need help with classwork. Phones can also be a distraction by giving us the temptation to text our friends and go on social media instead of doing work.