Is Trump Fulfilling the Presidential Powers and Roles?

Home Is Trump Fulfilling the Presidential Powers and Roles? 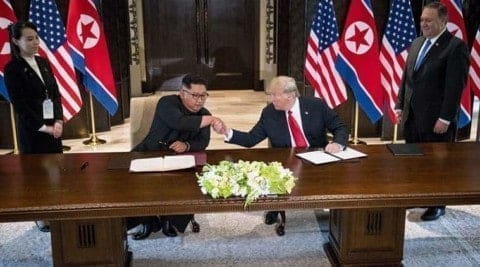 An important purpose of our government, as stated in the Preamble of the U.S. Constitution is to secure the blessings of liberty. The president of the U.S. plays an important role in ensuring our government’s actions are working toward this goal. Among the most significant presidential powers that can secure the blessings of liberty are chief of state, executing the law, and chief diplomat. President Trump’s meeting with the Korean leader, Kim Jong Un helps us understand the importance of a chief diplomat because it makes sure that the United States will not face any threat from other countries.

One important role that the president must fulfill is being the chief of state, this means that he needs to be the head of the country and the symbol of the people in the nation (Quizlet). In other countries the chief of state could be the king or queen but in the United States its the president, and they all need to be an example for the whole nation (Scholastic). Since the president’s actions and words are examples to the nation, then if he follows the law and is a good citizen then everyone will follow in his steps securing the liberty of those living in the nation. Since the president has the responsibility of showing the people what a good citizen ought to be, what he does tells the nation what is good or bad. With that in mind, if he does something wrong and it’s justified then the nation’s morals will be skewed, putting the nation’s security of liberty at risk.

The president not only has to fulfill certain roles he also has certain powers granted to him when he takes office, one of those powers is his duty to executive the law. That power gives him permission to carry out any laws regardless of his opinion and views (The Heritage Foundation). This also means that he can interpret the law and execute that law how he believes would be the most beneficial if the law is not specific enough. This relates to the “blessing of liberty” because the president’s job is to make sure all laws are being followed, so his citizens are able to use their liberty. Writing and passing a law is an important job but it’s also equally important for that law to be enforced and that is one of the many jobs the president has.

As mentioned before the president has many roles he needs to accomplish, one of them was being chief of state but another as important as the rest is being chief diplomat. To be the chief diplomat means that the president gets to decide what his diplomats and ambassadors do or say to foreign governments (Scholastic). Being chief diplomat could also mean traveling to other countries to meet with leaders or having diplomats at the White House. To make sure that our country is safe from outside threats then it must be in constant communication and agreement with other leaders. Making his diplomacy essential to our liberty, one of the purposes of our government.

In recent news, we are hearing about the North Korean leader Kim Jong Un and president Trump meeting and trying to agree in where they stand about their nuclear weapons and economic santions. Both leaders had a meeting at Hanoi, Vietnam where they discussed several topics concerning each country. President Trump is one of the fews presidents that has met with a Korean leader. He used his role as chief diplomat and the growing concerns about a nuclear attack from North Korean to clear the air between both coutries. The meetings haven’t resulted in any deal between both leaders but it will leaven an impact since it shows that both countries are at least willing to discuss several topics. There is still some tension between both countries but improvements have been made.

The presidential roles and powers of being a chief of state, executing the law and chief diplomat are all essential to the purpose of government of securing the blessing of liberty. President Trump has made done and fulfilled his job in different ways that previous presidents have done, all resulting in new outcomes.

Hi Jessica! This is a wonderful review of the role of the president in the United States. You explained the chief of state, executing the law, and chief diplomat well, as well as Trump’s interaction with them. I like your use of current events, like North Korea and Kim Jong Un. The one thing I think you could improve on is showing Trump’s shortcomings. Has he fulfilled all of the presidential roles? Is he an adequate representation of what a U.S. President should be? Here is a review of Trump’s first two years as President. Hopefully it will help you get started. Overall, good job! https://www.bbc.com/news/world-us-canada-38663043