Is the Green New Deal a reasonable solution to large scale problems?

Home Is the Green New Deal a reasonable solution to large scale problems? 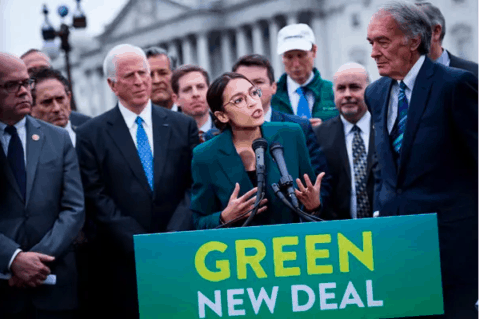 Global climate change and economic disparities are becoming hot topic problems in American politics. While some say that the United States government and the world governments as a whole should not take drastic measures to combat the effects of climate change, some say the opposite, and some politicians have proposed a dramatic plan that would, according to CNN,

“equal taking American society back to the drawing board and rebuilding it from the safety net up” (Wolf 2019).

With all of the polarizing opinions, the plan is difficult for the general public to form firm viewpoints about. Without listening to the perspectives of politicians, we can look at the plan for ourselves and decide whether or not we support it without the distraction of outside opinions. Broken down, the plan has many different important facets to consider. First of all, the Green New Deal proposes environmental solutions that could cost up to one trillion dollars (Wolf 2019). The plan proposes that the United States to switch to running on mainly renewable energy, making the electrical system better, improving energy efficiency in buildings, growing public transportation, using low-tech tools to take greenhouse gases from the atmosphere, help farmers and ranchers become more carbon neutral, ensuring jobs with leave, vacation, retirement, and labor laws (Wolf 2019). Along with these plans, the deal covers more, from gaining the consent of Indigenous Peoples on decisions that have to do with their lands, as well as giving everyone health care, housing, clean water and air, security, healthy food, and access to nature (Wolf 2019).

Overall, the plan has a lot that it wants to accomplish, however, it needs a lot of resources in order to do so, such as money and political support. With the plan enacted, proponents hope to improve the future globally in terms of climate change. The proponents of the deal are also hopeful that they can tackle the obstacles faced in achieving the deal. Alexandria Ocasio Cortez, one of the main proponents of the deal, has been very outspoken about this.

“Ms. Ocasio-Cortez has acknowledged that the Green New Deal is going to be expensive, but contends the plan will pay for itself through economic growth” (Friedman 2019).

Opponents of the deal say that the obstacles will outweigh the benefits. However, many outspoken political opponents of the deal have made claims that are misinformed. A Republican senator from Wyoming is credited with saying that the Green New Deal will take away things like ice cream and cheeseburgers because he claimed that the deal plans to ban livestock (Friedman 2019). However, the plan is not nearly this drastic. With all of the opposing opinions, it’s important that we inform ourselves from an objective point of view on subjects that really matter, such as the Green New Deal in its proposed solutions for large-scale problems.