Home Is Testing on Animals Ethical? 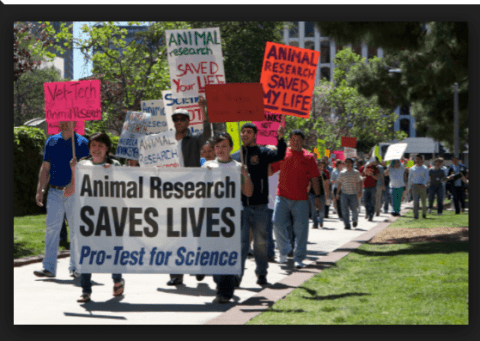 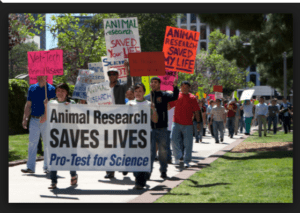 Animal testing is known very well. Researchers use animals to find medication and treatment for diseases. But the big question here is testing on animals ethical? Animal research is ethical when it is used to find treatment for both humans and animals and the research is making a positive effect in the world like helping people with diseases.

To begin, in an article called “Facts about Animal Research” by pro-test.org.uk. They state,“Without animal research, medicine as we know it today wouldn’t exist. Animal research has enabled us to find treatments for cancer, antibiotics for infections, vaccines to prevent some of the most deadly and debilitating viruses and surgery for injuries, illnesses and deformities”(pro-test.org.uk). This matter because animals have been very  helpful in research, animals have found many cure for diseases. This is important because if we never have used animals in the past there is no way that the treatment could have been made and there would be many people getting affected and dying. This is ethical because animals have helped find treatment and cures for diseases, virus, and infections such as, cancer, polio, and other deadly illness. Secondly, in an article called, “Should Animals Be Used For Scientific or Commercial Testing?” by ProCon.org, they explains, “Animals themselves benefit from the results of animal testing. If vaccines were not tested on animals, millions of animals would have died from rabies, distemper, feline leukemia, infectious hepatitis virus, tetanus, anthrax, and canine parvovirus” (ProCon.org). This is important because not only is the treatment helpful to humans but it was also very helpful to animals. Using animals for research may be very hurtful to watch because of how the animals are being used, but without the animals we would not be here in the first place. Most of these animals were used to help humans and make it a better world.

Additionally, in the article called “Why Are Animals Used in Research?” by The NAtional Academies Press. They express, “Instead, the drug or technique is tested in animals to make sure that it is safe and effective… Some animals have biological similarities to humans that make them particularly good models for specific diseases, such as rabbits for atherosclerosis or monkeys for polio”( The National Academies Press). Some animals are very similar to humans in cells, DNA, and in many other ways. Animals and humans both can get the same disease and finding treatment for both of them is ethical because both of them are getting treatment and they are both benefiting from the research. For example scientist found treatment for type 1 diabetes by using dogs, the dogs were tested on the pancreas (which both humans and dogs have) and soon the scientist found the reason why it was cause and they used dogs to find treatment for both of them. The testing on animals also make sure that no humans get harmed when the medication is used. The medical research can provide accurate results/ treatment for patients and help researchers figure out which treatment are more beneficial for human. Furthermore, in the article called, “Animal Research: How it Benefits Both Humans and Animals” by Trish Consunji. Consunji illustrates, “These animals are heroes. Their contribution to discovering life-saving advancements in medicine and science—for both pets and humans—is enormous, … Thanks to the last century of animal research, we have achieved life-saving treatments for people and animals. As veterinarians, we are able to treat more ailments and prevent more diseases, and that allows us to keep our pets living longer and healthier”(Consunji). This matter because without animals research  many other animals, such as cats, dogs, and other pets people love, would be dying and getting sick more often. For example, if you have a dog and it needs it shots and all those shots that the vet is giving your dog was found by using animals. Animal research is ethical because it helps many people and animals get better and finding new medication. Moreover, in the article called “Medical Benefits” by Speaking of Research provide, clarify, “These treatments have been used to save or improve the lives of many millions of people worldwide” (Speaking of Research provide). Not only does animal research help people, but it helps people world wide. Animals are heroes because they are saving people, they don’t wear capes but they for sure help many people around the world get better and even get cured. Even though many people disagree about using animals for research we are using them for a good cause. This is ethical because many of the animals are making a better and healthier world by being used to treat viruses.

In conclusion, animal research is ethical when it is used to find treatment for both humans and animals and of the research is making a positive effect in the world like helping people with disease. This is true because the experiment that are done on the animals have a good impact on humans and animals  that save both of their lives.

“Animal Testing – ProCon.org.” Should Animals Be Used for Scientific or Commercial Testing?, animal-testing.procon.org/.

This article is explaining how animals helped humans get better by finding cures and treatment. The article focused on explaining the pro and cons of using animals for research. The article is credible because it explains both sides (pro and cons) on using animals so they are not bias. The article also focus on Promoting critical thinking, education, and informed citizenship by presenting controversial issues in a straightforward, nonpartisan, and primarily pro-con format

The article talks about what disease did animals help find cures for. the Article focused on the benefits for animals research and explain how they help find cures for different disease. This is a credible source because Speaking of Research is an international advocacy group that provides accurate information about the importance of animal research in medical and veterinary science.

This article was about how animals have helped the medical research. The article shows how the research was benefit, how many animals were used in the research and what type of animals were used. This is a trustworthy source because it explains the facts with other articles backing them and showing that the information are facts and are not made up. The article’s purpose is to inform people and not to sell them anything.

This article was about why scientist use animals to find medication and treatment. The article focus on informing the reader about the good things and the benefits that the research does to people and animals. This is a trustworthy article because it is a book to inform people about the animals, medicine, and the science behind it. This is also trustworthy because the website shares book about important subjects.

Dear Naycet :
I am astounded by your post and argument on, “Is testing on Animals Ethical?,” because I’ve only read articles that thought animal testing harmed animals and therefore did not support it. Hearing your perspective on this issue really opened my eyes, even if I don’t necessarily agree with what you were saying.
One sentence you wrote that stands out for me is: “This is important because if we never have used animals in the past there is no way that the treatment could have been made and there would be many people getting affected and dying.” I think this is interesting because I haven’t thought about animal testing this way. I agree that we would have be so medically advanced if it weren’t for animals but I feel like scientists could have taken a different approach to this situation. They could have used humans that were willing to “sacrifice” themselves to scientific research. I would think that there are some people willing to volunteer knowing that they may save tens of thousands of people.
Another sentence that I found enticing was: “Instead, the drug or technique is tested in animals to make sure that it is safe and effective… Some animals have biological similarities to humans that make them particularly good models for specific diseases, such as rabbits for atherosclerosis or monkeys for polio.” This stood out for me because I realize that these tests are tested for how safe they are before they are administered but if they are so safe and dogs have similar DNA to humans, why can’t the tests be performed on humans?
Thanks for your writing. I look forward to seeing what you write next because this piece was intriguing and it helped me understand that there are people who believe that animal testing is considered to be ethical, even if I am not one of them.

I am really shocked about your post “animal research” because you talk about how the scientist should do testing on animals. I agree with you because without the animals there would be a lot of people who are dying because of the disease. One sentence that you wrote that standed out to me is “Without animal research, medicine as we know it today wouldn’t exist”. This quote standed out to me because it is really true that without animal animal testing there wouldn’t be a lot treatments of any of the medicines that we take no they wouldn’t be exciting and there would be alot of people dying because there is no cure. Thanks for your writing. I look forward to seeing what you post next because you had some really thoughtful response and you had a really strong claim.

I am delighted by your post Is “Testing on Animals Ethical?” because you had a evidence that back up’s your opinion and makes it stronger. One sentence that stood out to me is “This is ethical because animals have helped find treatment and cures for diseases, virus, and infections such as, cancer, polio, and other deadly illness”. This stood out to me because the question that you had in your title you expressed and talked about ti more throughought your writing. I agree with what you are saying about how animals have helped us his because I also believe that animals has helped us and is still helping animal researcher with finding new vaccines for people. Thank you for writing. I look forward to seeing what you write next because your introduction makes readers read further on.

Thank you for reading my blog. One question that I have for you is what animals do you think it is better to test on new treatment and why? Also do you agree with using animals to test on makeup?