Is Immigration into the U.S. an Actual Problem?

Home Is Immigration into the U.S. an Actual Problem? 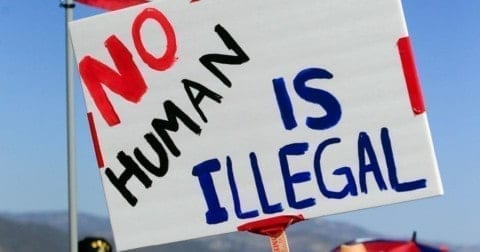 There is a rise in immigration into the United States, and there has been in years’ past. With Trump’s insistent “Build the Wall” slogan, I question whether immigration of any kind is not welcome, or only if it is people of color immigrating into the U.S.

Marco Saavedra, born in Oaxaca, Mexico, and an illegal immigrant in the U.S. says he “is the problem” (sarcastically). His argument is one against hypocrisy in the U.S. stating “Rich migrants and foreigners from other first-world countries are apparently not the problem. Nor are neo-liberal trade agreements that wreck indigenous economies or the mass media seduction to sacrifice everything for a better a life in the United States.”

Many complain that there simply aren’t enough jobs to go around. I refuse to let that be an answer when my grandmother came here from the Basque Country in her mid-20s and decided to create her own job by cleaning people’s houses and saved up enough money to send my mother and uncle to private school, without aid, as a single mother. My grandmother still works today at the age of 86. I refuse to let that be an excuse when my father took any job he could get after risking his life crossing the border from Mexico into California. He did the work that no one else would, except for immigrants: picking fruit in the fields of Livingston, California. My tias and tios, grandma, great aunts and great uncles worked as janitors, cleaned houses, picked crops in fields, waitressed, cooked, or bussed at restaurants, and labored hard in order to provide for their families and give to the U.S. economy. Yet, the U.S. economy does not give back. It does not let up on taxes, whether these immigrants are legal or illegal. It gives welfare to those who don’t need it and don’t work; there are American-born people standing on the corners of streets begging for handouts while there are immigrants begging for a job at the corner of Home Depot.

Immigration by people of color is not the problem. The problem is the way our society, our culture, our economy, and our government handles it. Illegal immigrants, and immigrants in general, work hard to be here, yet the government does not want to recognize them as humans looking to help their kids succeed more than they would have in their home land. However, we recognize those who don’t work, who sit on their butts all day, who are on welfare when they don’t need it as proud, patriotic U.S. citizens. Government officials and authority need to put themselves into the shoes of those who immigrated here and realize that they are not much different, for their ancestors immigrated here as well, and for the reason that we are all human beings with equal rights.

Dear Sophie,
I am impressed by your post , “ Is immigration into the U.S an actual problem” because many people do not do the jobs that immigrants do. For example i have seen only on white young american working in the fields and he was surrounded but mexican, he would not understand what they would tell him but he did got along with them even thought they were different from one another with language.
One sentence you wrote that stands out for me is “ the government does not recognize immigrants” Is something that one day can change. For example a lot of americans celebrate Cinco de Mayo but do not know the main meaning to this. Maybe one day immigrants can get a day to get recognized like Martin Luther King JR day.
Thanks for your writing. I look forward to seeing what you write next because the topic you wrote about was good. I also look forward on reading it.
Yuliana Vasquez

Sophie,
You make some great points about immigration and people working hard to achieve everything they want to in life. I however disagree with some of your statements about other disenfranchised americans and their status and how they “sit on their butts all day.” I see this as clumping all people into one group which is something that Trump does to immigrants. It overshadows your amazing points about the tax system in america which is unfair to immigrants.
http://theweek.com/articles/449215/does-welfare-make-people-lazy this article does a great job of looking at the welfare systems and their advantages.
Thanks, Simon