“Is Illegal Immigration an Economic Burden to America?”

Home “Is Illegal Immigration an Economic Burden to America?” 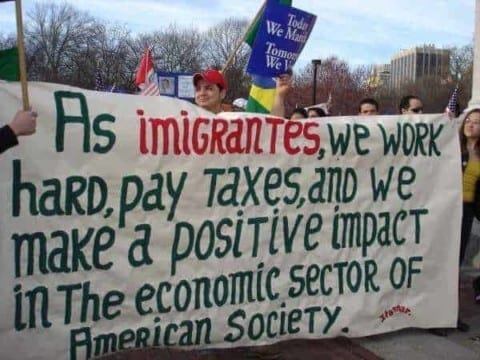 I read a few fascinating articles on how illegal immigration into the U.S. has many benefits, which is what I am arguing as well. However, I read the different arguments to this question: “Is Illegal Immigration an Economic Burden to America?” a pro-con website. It is helpful to build my argument based on the thoughts of the other side. Therefore this website was really helpful.

The Pros to the question (meaning they believe immigration is a burden) addressed many of the economic concerns to the argument. However their arguments were contradictory and were not as supported by facts as was the Con’s side (arguing that illegal immigration is actually beneficial). The Pro side argued “In 2010, the average unlawful immigrant household received around $24,721 in government benefits and services while paying some $10,334 in taxes. This generated an average annual fiscal deficit (benefits received minus taxes paid) of around $14,387 per household. This cost had to be borne by U.S. taxpayers… Under current law, all unlawful immigrant households together have an aggregate annual deficit of around $54.5 billion.” However, does this take into consideration the fact that the top 1% does not even pay as much taxes as the middle, lower middle, and lower classes? the top 1% gets so many tax cuts that they do not get taxed as much, therefore not benefiting society, yet illegal immigrants who live off lower than minimum to minimum wage are expected to pay more taxes than a CEO of a successful company. There is more of a deficit to how the top 1% doesn’t pay taxes. “The estimated wage suppression and fiscal costs are relatively small, and economists generally view the overall economic benefits of this workforce as significantly outweighing the costs.”

“In 2012, researchers at the Cato Institute estimated that a mass deportations policy would reduce economic growth by around $250 billion per year. Those costs would not be evenly distributed: Those at the very bottom of the income distribution, particularly those without a high school diploma, may even earn higher wages in the absence of undocumented immigrants.” Undocumented workers keep wages balanced and make up most of the GDP. Without their work, the U.S. would be more in debt than it is. If their was a mass deportation, there would be an economic depression because there would be no flow in the economic cycle. There would be no consumerism, not as much taxpayer money, and not as much labor.

“Even though illegal aliens make little use of welfare, from which they are generally barred, the costs of illegal immigration in terms of government expenditures for education, criminal justice, and emergency medical care are significant.” Illegal immigrants are not the problem in this case. Lazy people living off welfare when they can actually get off their butts and work are the problem. The fact that people are mad that their taxes go towards illegal immigrants (which it barely does considering how much illegal immigrants “benefit” from it) and not mad that their tax money is going towards lazy, unemployed people on welfare shows that most people are just complaining about illegal immigrants that aren’t white and are hypocrites of the situation. Illegal immigrants also do not get great education or criminal justice because of the costs that taxes aren’t going towards. Taxpayers money goes towards lower class white American-born citizens’ poor public education too. We have a poor education system in this country, it has nothing to do with illegal immigrants. As for imprisonment and the criminal justice system, illegal immigrants are arrested more because of their color, as are any people of color; this is a fact that we have seen since before the Civil Rights Movement. Taxpayer money is going towards getting white rapists from Stanford out of jail in 3 months and keeping in people of color imprisoned for being found with a dime of weed on them. Most of these Pros towards the main question are based on systemic racism, and are simply trying to push out hard-working illegal immigrants of color, when they actually benefit society as a whole.

Sophie this really outstands to me “Illegal immigrants are not the problem in this case. Lazy people living off welfare when they can actually get off their butts and work are the problem.” This relates to me because I have the same thoughts. People living of welfare are the ones taking money away from the government then they blame us!

Very interesting topic, Sophie. I admire how you add the opposing argument to yours to enhance your article. I found it very valuable that you could analyze both sides. I agree with your stance on the issue as you stated, “mass deportations policy would reduce economic growth by around $250 billion per year” which is a huge factor in favor of giving illegal persons a path to citizenship. If you would like to learn more on this topic, please take a look at this article: https://www.thebalance.com/how-immigration-impacts-the-economy-4125413. I look forward to reading more from you on this topic in the future.

Hello Sophie, I really like this post that you made. I totally agree with you that it’s not fair for the illegal immigrants to receive unfair treatment. I found it interesting that if a huge mass of people were to be deported, economic growth of $250 billion would be reduced. I really love this article because people who talk bad about immigrants need to look more into the reality of the situation and see that they are a big part of our economy. .