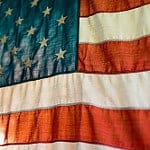 George Orwell’s 1984 is centered around many societal warning, one of the most significant being government violation of the individual’s right to privacy. Constant surveillance of the people through technology to the point of widespread extreme paranoia was clearly a prominent future concern for Orwell. His worries manifested in the creation of a society where telescreens observe citizens’ every movement at work, in public, and at home for signs of “thoughtcrime,” mental disobedience to the tyrannical government figurehead: Big Brother. Thoughtcrime implies that this government perceives the peoples’ minds as property, taking away literally every freedom they could be awarded. On page 53 of 1984, the novel’s protagonist Winston describes the state of Freedom in his state: “How could you have a slogan like ‘freedom is slavery’ when the concept of freedom has been abolished? The whole climate of thought will be different. In fact, there will (eventually) be no thought, as we understand it now.”

In contemporary society, major technological advancements have made it so peoples’ lives are observable even when they’re simply sitting at home, and with the installation of Homeland Security sixteen years ago, the paranoia that followed the 9/11 terrorist attacks, and the Internet becoming an easily accessible extension to public life, it is not impossible that Orwell’s prediction could/have become a reality. According to The American Civil Liberties Union website (,ACLU), recent revisions made to the Foreign Intelligence Surveillance Act in the US government highlights eerie similarities to Oceania’s, the name of the civilization in 1984, policies. This bill legitimizes collections of domestic communications, unofficial “backdoor searches” which collect civilian data with zero need for a warrant, and the tapping of the physical infrastructure of citizen’s personal devices with no tangible reason for investigative concern.

Homeland Security is a United States cabinet program in charge of monitoring domestic affairs within the country and protecting United States borders. However positive the intentions of such programs seem to be, there has been widespread concern over the Department of Homeland Security “overreaching in its efforts to establish an effective role in the Intelligence Community.” (Now Comment Source) Practices such as laptop searches which allow the content of traveler’s devices to become the property of the government without any need for supported suspicion, behavioral and appearance profiling, spending vast amounts of time and money investigating political interest groups with no prior suspicions of violence or domestic threat, and domestic satellite surveillance which employs spy technology to monitor American civilians have been cited as programs that raise red flags for the public. With the consistency of smartphones, social media, and publicizing of peoples’ lives online, it is not conceivably difficult for anyone to monitor another person, let alone the government who has access to funding and resources. The rapid removal of privacy makes people feel less and less safe on digital platforms and in reality (NowComment Source.)

The greatest concern in regards to the Department of Homeland Security is the tapping of American citizens’ devices in order to monitor the public without evidence that such precautions are necessary. According to an article published on The Guardian, apps like Snapchat, Facebook, Instagram, Twitter, Linkedin, and WhatsApp may be taking in more information from peoples’ phones than they are aware. The access that is given to the front/back phone cameras and microphone, uploading of pictures taken within apps to a separate server, automatic facial recognition services, keylogger services on iPhones that allow users to automatically login to any website with no hassle, the background use of location services in many apps, and the trust people place in technology to store any and all of their information makes users’ data more susceptible to hacking and monitoring. Edward Snowden, an ex CIA agent, released information regarding an NSA program called Optic Nerves. Optic Nerves is an alleged bulk surveillance program that captured screenshots from video chats across the country for future use. The government hacking of webcams is eerily similar to Orwell’s prediction of telescreen monitoring.

Government surveillance is an issue because it spends federal money on investigations that later prove to have been unfounded, unnecessarily invades citizens’ personal privacy, and over monitors in an attempt to accomplish its goal. For example, NSA data collection programs. To prevent this problem from reaching 1984’s predicted level of privacy invasion, a solution needs to be implemented. Encouraging expansive and comprehensive digital mindfulness from the public and requiring every investigation and program instigated by Homeland Security to have tangible evidence of suspicion and to undergo a more strenuous process to receive approval for funding are viable solution proposals because they attack this issue from both sides.

Some may argue that Homeland Security actually provides Americans with a greater sense of security and that their vigilance over cybersecurity is only benefitting the public. And this is true in regards to foreign affairs, but the actions Homeland Security that have failed to be supported by tangible suspicion gives the government too much power over the individual and their natural right to a private life. Some may also argue that if people post their lives on the Internet, they are welcoming the monitoring. However, most people are unaware of exactly how much of their information is available with the right resources and hacking technology and unaware that the government is monitoring in such ways, making such surveillance unethical and a violation.

Educating Americans on how much of their information is available as well as encouraging a greater sense of mindfulness for what is posted and saved on one’s phone could solve a portion of this issue. Also, ceasing to allow smartphones to save so much information automatically would lessen the access the government and potential hackers have to the individual’s personal information. On the other side of this issue, implementing stricter requirements for the Department of Homeland Security’s initiatives would make sure that all of their actions are a wise use of federal funding, time, and power. Requiring them to present solid evidence of suspicion before investigations, lessening their access to the average American’s personal information, and requiring them to undergo a more difficult program approval process would allow American sense of overall security to remain while also feeling that their private information solely belongs to them.

An American digital education program could be implemented as a part of school curriculum, through widespread press announcements, and government authority supported initiatives from technology companies. The changes in the Department of Homeland security would most likely need to be proposed as a bill in Congress. As the American Civil Liberties Union website encourages, “Congress can and should exercise its oversight authority…to ensure the intelligence agencies deliver on broken promises.”With enough support from the American people, however, this could be definitely be pushed into the government’s priority consciousness. This level of government access to people’s individual lives, especially without defined reasoning, could easily lead to widespread paranoia and tyrannical government habits. Winston describes such detrimental paranoia on page 62 of 1984: “it was terribly dangerous to let your thoughts wander when you were in any public place or within range of a telescreen. The smallest thing could give you away. A nervous tic, an unconscious look of anxiety, a habit of muttering to yourself – anything that carried with it the suggestion of abnormality, of having something to hide. In any case, to wear an improper expression on your face (to look incredulous when a victory was announced, for example) was itself a punishable offense.”

2 Curran, Dylan. “Are Your Phone Camera and Microphone Spying on You? | Dylan Curran.” The Guardian. April 06, 2018. Accessed December 17, 2018. https://www.theguardian.com/commentisfree/2018/apr/06/phone-camera-microphone-spying.

3 Curran, Dylan. “Are Your Phone Camera and Microphone Spying on You? | Dylan Curran.” The Guardian. April 06, 2018. Accessed December 17, 2018. https://www.theguardian.com/commentisfree/2018/apr/06/phone-camera-microphone-spying.