Is Christmas Too Commercialized?

Home Is Christmas Too Commercialized? 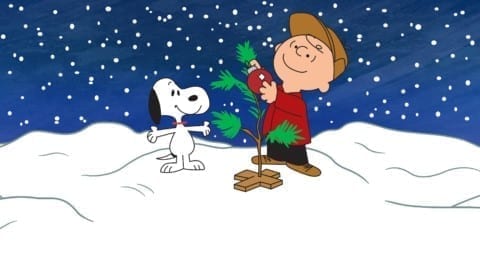 As soon as the clock strikes midnight on Halloween, stores rush to put away the Halloween decorations, and only moments later, the Christmas decorations are displayed on the shelves. Christmas music is blasted, boring coffee cups are traded for dazzling Christmas cups, and people quickly fall into the holiday spirit, making their lists and checking it twice.

Once Black Friday hits, the next month is followed by the stress and anxiety of searching for the perfect gifts for your loved ones. The Hallmark channels’ views skyrocket, as people gather around and watch their favorite Christmas movies as a part of their holiday activities. Each year, Christmas becomes more commercialized and the true meaning of Christmas is lost.

One popular Christmas movie, “A Charlie Brown Christmas,” is a movie that grounds us in the true meaning of the holiday with its great message. In the movie, innocent children remind everyone of the superficial and materialistic holiday Christmas has come to be. When the movie was first released in 1965,  “…it was greeted with skepticism and disappointment by the CBS and Coca-Cola executives who had originally bankrolled the special” (Kim).

In a scene from the movie, Charlie Brown is outraged over the overwhelming materialism he sees among everyone during the holiday season, and he needs Linus’ help to learn what the true meaning of Christmas is. This movie reminds people of the true meaning of the holiday: simply spending joyful time surrounded by loved ones.

Many people also uphold Charlie Brown’s views on Christmas, while others get wrapped up in the extravagance of the holiday like Snoopy does as he decks out his doghouse with lights and other holiday paraphernalia. Charlie Brown had it right though, as “over $450 billion dollars are spent in the US during December” (D’Angelo). Instead of giving to organizations in need with all this money, we unnecessarily stress ourselves out for a month as we buy gifts that somehow display how much we love our family and friends.

Christmas began with a baby in a manger, yet has strayed so far from that in the years followed. As the Puritans came to America, they made it illegal to celebrate the holiday in the 1600s. As the years crept on, the holiday was then about drinking to your heart’s content.

In the 19th century, German immigrants and Catholic Dutch introduced the idea of gift giving and St. Nicholas to America. From there, Charles Dickens’ A Christmas Carol created the image of Father Christmas and “Marketers in New York saw the personification of Christmas as an opportunity to sell goods and began to associate this early image of Santa Claus with their advertisements in the 1840s” (Takahashi).

Then in the 1930s, mass commercialization took over. Popular Christmas songs were released, stores began to create holiday images in stores and catalogs with the modernized Santa Claus, and jingles were created to interrupt programming. Children for the first time were advertised to, which guilted the parents into buying presents for their kids from Santa.

The celebration of Christmas began to branch out: “The secularization of Christmas was also intentional…The idea was to create a holiday season that all Americans, Christians and non-Christians, could experience. By sharing the joy, they would also spend more money” (Takahashi). Phrases such as “Happy Holidays,” which includes the Jewish celebration of Hanukkah, were adopted and the holiday became more universal.

Dear Kaileigh,
I am pleased with your post, “Is Christmas too Commercialized?” because I feel like the true meaning of Christmas is not existing anymore. Many people only think of Christmas as a day to get presents instead of the religious meaning.

One sentence you wrote that stands out to me is, “We need to reconnect with the true meaning of Christmas and celebrate the holidays as they were always meant to be.” I think this is significant because everyone has their own modernized view of Christmas, even though it originated in religion. In addition to this, Christmas should be given back its original meaning and feeling.

Thanks for your writing. I look forward to seeing you write again because you discuss important things. Also, you know how to make your reader feel more engaged.

The meaning of Christmas has changed over the years. Aside from the religious aspect, this Holiday has moved away from the joys of bringing families together to how many presents are under the tree. Now I’m not saying I don’t love getting gifts, but I feel like we have lost sight of the true meaning of Christmas. Christmas has turned into a way for companies to make a bunch of money selling gifts and Christmas themed goodies. And it is sad to see people worrying if their gift was expensive enough or cool enough for the person they bought it for. I really liked that you addressed this topic because even though it is not spoken about often I believe it is a common thought that has most likely crossed many of our minds especially in the “older generations”.

This post brings up many points that I think many people overlook. Specifically, the idea of Christmas starting the day after Thanksgiving. I think we often forget that there is almost an entire month in between Thanksgiving and Christmas, because we rush into decorating so soon. No other Holiday gets nearly that much celebration before the actual holiday. I also really like the point about materialism taking over. The holidays are supposed to be about celebration and family, and I think we often forget that. I really like the many points you brought up in this post and it is very well-written!

There was a period of my life where I was pretty Grinchy on Christmas, mostly because I thought it was too much. In recent years, I’ve fallen away from this attitude and re-embraced some of the materialistic fun, but it doesn’t hit quite the same note as it did for me as a child. Some potential for a follow-up: can you think of rites or traditions that often mean something different to children, young adults, and older adults? How are these rites perceived and what about changes in the life cycle causes those perceptions to change over time? Is the child’s perception of Christmas (or any rite) really the purest, or can these perceptions, perhaps, get richer over time?

Interestingly enough, I come from a religious tradition that calls for a more austere Advent period. Like Great Lent– before Easter– in the Orthodox Church, calls for more alms-giving and near-vegan fasting for the 40 days leading up to Christmas. Traditionally, in Orthodox countries, the celebration begins on December 25 and goes through January 6th and 7th (The feasts of Epiphany and St. John the Baptist). Big contrast, now— December 26th is frequently a downer for me, and New Year’s Eve just seems……. lame. Another question to prompt a potential follow-up piece: Do we miss out from a lack of simplicity? Could our revelatory highs be a whole lot richer and more enjoyable if there were time– not just individual time, communal time, to slow down a bit? How much of this slowing down time do we need? For instance, in the Orthodox calendar, there are more days prescribed for fasting than there are non-fasting days. This model isn’t necessarily the answer, in fact, very few people follow these guidelines to the tee, but it certainly makes you wonder. Outside of fasting, what does “slowing down” and simplifying potentially even look like in a 21st century American society?

Questions to think…. and write!…. about!

I am fascinated by your writing, “Is Christmas Too Commercialized?” because I feel that no one really cares about the other holidays except for Christmas. I also have noticed that when Halloween is over stores stock up the aisles with Christmas decorations right away. One sentence that you stood out to me was “In a scene from the movie, Charlie Brown is outraged over the overwhelming materialism he sees among everyone during the holiday season, and he needs Linus’ help to learn the true meaning of Christmas is. ” I think this is true because once I now realized that you have to get the most expensive, trendy, popular gift for your loved ones. But Christmas is all about spending and enjoying the day with your loved ones. I feel that everyone lost the true meaning of Christmas. Thanks for your writing. I look forward to seeing what you write next because this was an interesting topic you wrote.

Hi Kaileigh,
I really enjoyed your post. What interested me the most was how you gave a time-line to the way Christmas has been continually commercialized through the years. I think that was a really interesting way to portray your idea that we must reconnect with the true meaning of Christmas, instead of allowing the secular idea of Christmas take over our lives this holiday season. One thing you said that really stands out to me is “Christmas began with a baby in a manger, yet has strayed so far from that in the years followed.” This stood out to me because I think it is a summarization of your whole post; it is a simple sentence but has so much meaning behind it. It shares the materialistic view of Christmas that is held today, yet Christmas began in the humblest manner possible, a baby in a manger. This post reminds me to realize that Christmas is the time to think about what is truly important, rather than get swept into the commercialization and secularism that is encouraged by modern society. Thanks for your project. I look forward to seeing what you write next because you have shown great insight to this topic of Christmas and I think your ideas are worth sharing. I like how you included detail and evidence to support your claim as well, as it created a stronger post.