Is a flu pandemic coming… or here?

Home Is a flu pandemic coming… or here? 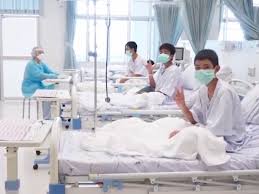 We think of the flu as a common seasonal illness that everyone is bound to get, right? Wrong, during the 2009 swine flu epidemic it affected 203,000 people, and the Ebola outbreak… only 39,962. In 1918 there was a flu epidemic across the world, killing more people than WWI and WWII, in only 18 months. Though this pandemic killed 50-100 million people today the effects would be much worse. In 1918 there were no planes and only 1.8 billion people on earth, but now there are 7.8 billion people on this planet, and a decent amount of those people are traveling from country to country every day. If something to this same severity happened today then hundreds of millions of people would die and not just from the pandemic, but from what we consider preventable deaths.

While the flu vaccine is only 50 percent effective getting it can hugely decrease your symptoms if you do contract the disease. Though there is hope, a universal flu vaccine. The biotech company distributed bio is trying to create a vaccine that could vaccinate against all possible flu strains. Though this is very difficult because this specific virus is ever-mutating. So instead of trying to attack all the symptoms and effects on the body, they’re attacking the “Achilles heel” itself. They looked at all the past flu strains and attacked the similarities, and this approach has been working in pig trials; but this vaccine won’t be available to test on humans until at least 2025, so we could be in serious danger in the meantime.

This pandemic type disease sounds far off but it’s really not. The Coronavirus affecting China right now could start this pandemic. It has already killed 56 and effected 1,975, and three in America (https://www.nytimes.com/2020/01/26/world/china-coronavirus.html). This specific virus is contagious even before the person shows any flulike symptoms, making it incredibly spreadable. It also has an incubation period of 10-14 days making the contagious period even longer. While the U.S. had taken all Americans out of Wuhan (where the virus started) and China has stopped the nationwide wildlife trade (which has been linked to epidemiological risks) we are at extreme risk. So we ask the question: is this the pandemic we’ve been anticipating?

I found this article interesting because of the comparisons of diseases and also the science behind stopping at least one major one, being the flu. I think it would hugely improve life and the health and science field to be able to make vaccines that protect against changing diseases. Technology and our knowledge continue to improve and it will be very interesting to see how fast and how far we can get.

Hey Sophia! Reading your article made me realize just how far things have come between now and the time of the first corona outbreak. We never thought that the situation would become such a world emergency. Like the “seasonal illness” you mentioned, I distinctly remember the phrase “It’s just like the flu,” being passed around during the initial phases of the pandemic. It’s really interesting to see how our view of the virus has changed since the beginning of 2020.

I am impressed that you wrote this in January when not many people knew about the virus. People traveling has been a huge reason for the spread like you predicted. Luckily a vaccine has been created that will slow the pandemic.

This article made me think how little we knew about covid back then. It is insane how much it has spread in one year and this article captured the prelude perfectly

It’s both interesting and heartbreaking to read an article you wrote at a time when the Coronavirus had only killed 56 people, when it has now turned into a global pandemic and crisis that has killed over a million. At the time of your post, the flu was the most pressing seasonal illness that we faced, and your evidence that conveyed it’s impact was compelling. To think that an epidemic in 1918, at a time when there were no planes and only 1.8 billion people on earth, was able to have affect so many brings that much more concern to the pandemic we face now, with widespread international travel, and seven times the population. Your discussion of the flu vaccine reminds me of the race to a coronavirus vaccine that we have all witnessed over the past months. The feat of now having multiple that first line responders, the elderly, and those at high risk are now receiving al over the world is an accomplishment to celebrate, but there’s still no promise of when life will return to normal.
Reading your thoughts on the “pandemic type disease” that began to circulate just over a year ago is like reading a prediction of the future, as you explained the gravity of a virus that so many neglected to take seriously. The coronavirus is, in fact, the “pandemic we’ve all been anticipating,” but unfortunately, I don’t think many really were anticipating it. If we had all taken the new, foreign virus as seriously as your post conveys, I wonder if we would be in the situation we are now.

This caught my eye right when I saw it. I checked the publishing date and was pulled in even more when I saw it was in January of 2020. This article talks about how there are only 3 cases currently in the United States, and about 2k globally. There were also only 56 deaths total. Now, we see close to that amount of deaths every day in our own state of Utah. This is extremely important, since if the US government had thought this illness through in the way you did, then we would be in the same position as New Zealand or Australia. The way we reacted to this pandemic was completely the wrong way. People are dying at a faster rate every day, and most people with a solid education can understand that this could have been prevented. Even I can see how officials could have acted better in order to stop the spread of the virus. The problem is that a large majority of individuals believed and still think that the Corona Virus is not real or is just like the flu.

What is so crazy about this article, is that you somehow knew before all of us that this was going to be the pandemic that we all would be affected by in the year 2020. Most of the people in America, and most of the world, to be honest, did not think that coronavirus would be a big deal at this point in time. How wrong and naive we all were to really think that we wouldn’t be affected by this virus. Now America leads the world in cases and deaths and it continues to get worse. Hopefully, with a change of administration, we might actually be able to tame this beast and beat it out like some of the other countries in the world have. It is completely insane that we actually thought we would be safe because of our innate feelings of pride for our countries ability to deal with diseases. But we were so wrong.