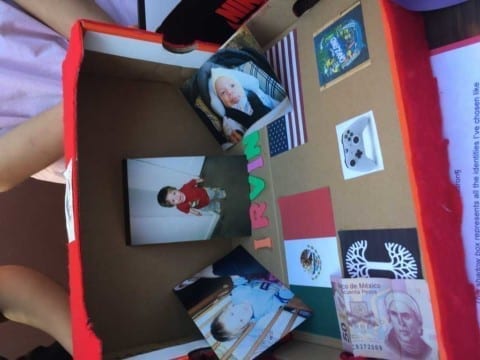 This shadow box represents all the identities I’ve chosen like being an Oaklander, an older brother and being Mexican. The red on the outside represents that Mexicans are supposed to be in gangs and there are some quotes that our current President Trump said about Mexicans. Also, I have stereotypes on the outside of my box that say how Mexicans are uneducated to show the dominant narratives other people believe. Then on the inside it breaks all the dominant narratives people have about Mexicans, it shows my counter narrative. Many people might assume that I’m White because of the color of my skin but I identify as Mexican. I have nationality in the U.S. and another chosen identity I have is being an Oaklander. I’ve chosen this identity because I’m from Oakland and I’m a proud Oaklander. This shadow box represents who I am and all my chosen identities.

I admire that you’re proud of your culture and that you’re standing against the stereotypes placed on Mexicans. I like that you included President Trump’s stereotypical quotes as well. It really helps to back up your claim of how people perceive Mexicans.

dear Irvin, what i like about your shadow box is how you put effort into it good job

dear irvin,
I really liked your box and the baby pictures and how you out them in to represent your childhood and i also really like the peso you put inside the box cuz i used to have a coin and they were are really heavy.