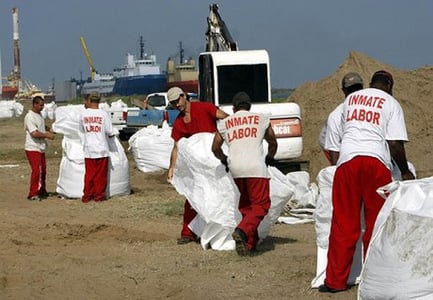 According to the Prison Policy Initiative, about 0.7% of the United States was incarcerated in 2016, this is approximately 2,261,700 people. These populations are put into the control of the prison system and are many times subject to prison labor. This means prisoners are put to work in mostly manual labor within the prison as well as in companies outside. This has recently come under the scrutiny of the general public and is being seen as slave labor. So what are really the benefits of prison labor and should it be abolished for its borderline slave-like practices?

In an article by Tess Garcia in 2020, about what prison labor really is and how it works, it is explained that there are typically two types of prison labor implemented in the United States prison system. The first involves prisoners being sent to work in private companies, earning hourly wages between $0.33 and $1.41 according to the Prison Policy Initiative. The second type allows prisoners to earn hourly wages of $0.14 to $0.63 (2017) working in the prison in custodial, maintenance, and food service jobs. Although these wages are clearly below the minimum wages in any state, there is a loophole in the wording of the Constitution that allows this in prisons. This is exactly where the question of slavery comes in. Despite the prisoners clearly being paid for their services, not only is this grossly below the minimum wage, but prisoners also end up only getting about half of their original income due to prison deductions. This leaves prisoners doing hard manual labor for hours on end with essentially no income, certainly not enough to sustain them once they are released.

There is however logic and reasoning behind the use of prison labor. According to an article about the pros and cons of prison labor, not only are the wages justified but prisoners many times feel that prison labor gives them the opportunity to not only gain skills for their life after prison, but it also lets them feel like they are part of their community again. One of the biggest arguments for prison labor is the fact that it may reduce recidivism or the likelihood of a criminal reoffense after release. However, this belief comes from the fact that the jobs present the inmates with opportunities and new skills, not because of the money they earn. Without reasonable wages, prisoners are released with practically no savings and no way to survive, which can often times cause them to re-offend. In this article, there is also mention of perspectives of prisoners. For the pro side, Chandra Bozelko says, “My prison job made me feel like I was fulfilling my existential duty to society. I was contributing. It doesn’t surprise me that prison work assignments are credited with reducing recidivism. Any change for good that happened within me while I was incarcerated grew out of my job.” The con side by Kevin Rashid Johnson, “I see prison labor as slave labor that still exists in the United States in 2018…I’ve witnessed plenty of examples of it. The most extreme was in Texas and Florida where prisoners are forced to work in the fields for free…[kept in line] through open coercion and violence. Prisoners who do not agree to such abject slavery are put in solitary confinement. I know from personal experience.” As is clear from both these quotes and the minimal amount of set in stone data about the subject, it is difficult to judge the ethicality of prison labor and whether or not it can be compared to slave labor.

Having read both sides of the story, how prison labor works, and how it hurts inmates, it is still unclear how effective prison labor is and if it is being done ethically. The lack of funding for the payment of the inmates causing low wages seems to be the biggest issue, making it most similar to slave labor, in which workers receive no payment. The issue continues as the United States must decide how logical, plausible, and economically sound it would be to start paying the inmates more. A change needs to be made and the prison system must be reminded that these people need help outside of prison and not just while incarcerated.