Internalized Misogyny Is More Relevant Than You Think.

Home Internalized Misogyny Is More Relevant Than You Think. 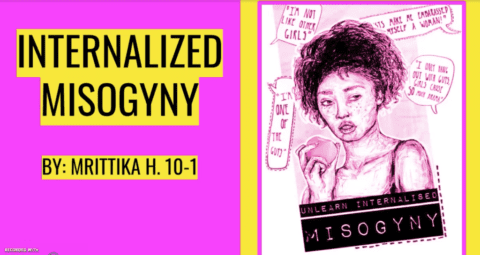 There’s an entire social system in place that teaches women to hate themselves from a young age and capitalizes off that self-hatred through selling girls diets and makeup. I am passionate about this topic, clearly, because girls face these kinds of issues literally everyday. Calling a girl petty names for petty reasons, gives a free pass for guys to do the same, so now it is double the pressure for girls. Girls have it bad enough with them being insecure, so technically the triple the pressure. Decentralize men from perceptions of women, decentralize patriarchal standards and see people for who they are instead of what society teaches them to be.

Before I started researching this topic, I was still passionate about internalized misogyny. I knew that it was a topic that necessarily no one really talked about and no one really paid attention to. However, I did not know that it happens on large scales, such as in politics. The statistics were outstanding. I am so outspoken and passionate about this topic also because every single person goes through this issue, knowingly and/or not knowingly, but it has been so instilled into our society that no one really gives a second glance. It is almost like we have gotten so use to putting others down that psychological and intangible issues like internalized misogyny or misogyny in general is not prioritized.