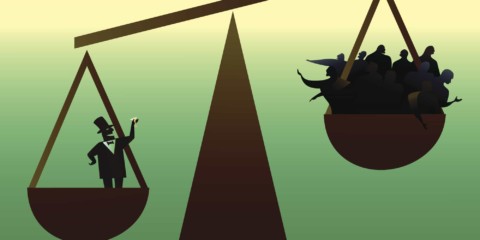 I am currently inquiring into the phenomenon of income inequality. It’s really quite an interesting topic since it’s in the public conscience, it’s rising and has been rising for decades now, and there isn’t really one consensus on how to solve it. The consequences of it are pretty nasty too: America has a shrinking middle class, the political climate is becoming more radicalized and partisan (see: the election of Donald Trump), and a lot of people are losing hope in American Dream and disbelieving in American exceptionalism. So I’ve been doing some reading.

I recently watched “Inequality for All”, a documentary by Robert Reich, where a few points are driven home about income inequality. The first is that the middle class drives our economy and that a shrinking middle class negatively affects everyone. Another is that real income, the amount of stuff someone can do with their yearly wage, has been decreasing for a long time. And finally, the point I find most concerning has to do with CEOs and the financial sector, where CEOs are being given increasing compensation for work that has not been increasing in productivity and has actually been responsible for many of the economic hardships in America today.

Another film, “Inside Job,” actually focuses on how corruption in the financial sector caused the housing bubble and subsequent crash. These are films that I highly recommend if you wish to learn more about why the economy is so bad for the middle class as well as who’s to blame.

Ultimately, it’s starting to look like class warfare. I’m looking forward to seeing if that’s really the case or if there’s some other reason such as the constant industrialization the world undergoes, but for now, it appears that the people at the top have played our nation like a fiddle.

Conner,
I’m glad that younger people such as yourself are interested in macroeconomics and the the problem of widening inequality of America. If you are interested on expanding your knowledge on the topic, I suggest that you read Aftershock, the written companion to Robert Reich’s Inequality for All. The book becomes more technical and further explains Reich’s arguments from the documentary. I also think it’s important for people to be aware of both sides of an argument. For this reason, you might also consider reading The Price of Inequality by Joseph Stiglitz. Like Reich, Stiglitz is also a Democrat, but he keeps a more neutral tone in his book and expands on the conservative solutions to lowering the inequality gap.

Hello Connor,
Based off your post I would assume that you have a lot of interest in macro level economics. If such is the case there are a few books that I would recommend. First is Aftershock: a more in depth analysis than “Inequality for All”. Das Kapital: a very difficult book, but its a very useful observation of the capitalist economy. The third, is more of a culmination of works, but read the arguments for capitalism by Rand, Menger, and Mises. They are interesting reads and can help you formulate ideas about modern economists. You should also read Chomsky and Nash.
As far as solutions go, the most excepted ones usually involve socialized healthcare and education. There are many counter arguments to both of these along with many individuals who find any move towards socialism as evil, but the intellectuals of economics agree. The arguments usually employed to counter these changes are based around archaic economic principles and usually have some ideological end that clouds the pragmatic vision.
Economic inequality is a very significant problem, and it’s important that we really enact positive solutions.