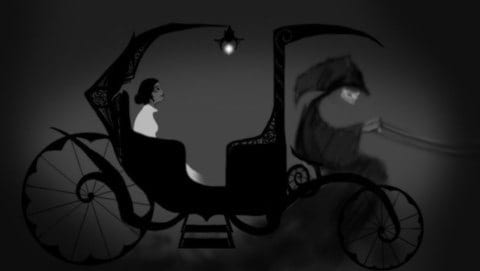 My first impression of this poem was that it was about death. It makes me feel inquisitive, yet, at the same time, intrigued.  A line that especially evokes the first feeling for me is, “Because I could not stop for Death- He kindly stopped for me.” The other feeling – Intrigued- arises when I read the line(s), “The Carriage held but just Ourselves- And Immortality”.  Perhaps because the speaker is talking about how they didn’t choose to die, life did and that they are now on their way to their final resting place.

What I know about the situation – what’s happening in the poem – is that the speaker has died and is on their way to eternity. What I know about the speaker is that they are the kind of person who is very reflective.  This is suggested by the lines “We passed the School, where Children strove, At Recess – in the Ring – We passed the Fields of Gazing Grain –  We passed the Setting Sun – ”.   The speaker seems to be speaking to people that are alive.  I say this because it seems like the speaker is telling them that death can come at anytime.  The poem doesn’t seem to spring from a particular historical moment or culture. The poem revolves around several themes, including death and dying.

If this poem were a question, the answer would be “Death stops for you”.  If it were an answer, question would be “What if you can’t stop for death?”  The title suggests that the poem is about their journey out of the mortal world to eternity.

Dear Chloe, I liked your analysis because it a different interpretation i had of the poem. i Got a sense that the poet was visiting or recalling all the memories he had before he dies. The poet probably has an idea that he will die soon. However your analysis is interesting as well as different because you are implying that the poet has already passed away and is “on their way to eternity.

Your initial analysis was done very well. I can tell that you have thought deeply about the subject. I personally really like your word choice. Your word is strong and really adds a punch and it puts your work on a different level. The words you chose also helped get you get your point across.In addition, I love how your theme it was about dark and different. Your idea is very intriguing. I would love to talk to you about your idea. I can’t wait to see more of your work.