Influence of Religion in U.S. Politics 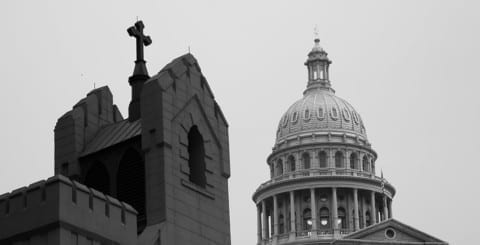 In the United States, church and state are supposed to be kept seperate. That means that policy makers’ religious convictions should not influence the decisions they make. According to a study done in the spring of 2019, American adults surveyed answered overall that religion should stay separate from politics (Pew Research Center 2019). According to the Pew Research Center,

“Nearly two-thirds of Americans in the new survey say churches and other houses of worship should keep out of political matters…” (Pew Research Center 2019).

Within politics, over 50% of U.S. Democrat-leaning and Democrat-identifying adults say that religious politicians have too much control over decisions being made within the Republican party (Pew Research Center 2019). It is clear that many Americans think religion holds too much power in politics.

Although most Americans believe that religion should be kept out of political discourse, politicians still use it to their advantage. A modern example of this is the Trump Administration, which has used religion to appeal to Christian conservative voters. This is especially evident in the administration’s proposed rule that would allow for adoption and foster care agencies to discriminate against LGBTQ+ parents (Bryson Taylor 2019).

The White House released a statement about the rule that said,

“The federal government should not be in the business of forcing child welfare providers to choose between helping children and their faith” (Bryson Taylor 2019). The separation of church and state is still relevant today, and this is clear as lawmakers realize that sometimes allowing for what they perceive as religious freedom can, in effect, allow for discrimination and injustice. It is difficult to balance church and state and still guarantee religious freedom. This is becoming more and more evident as the United States becomes more and more polarized both socially and politically.