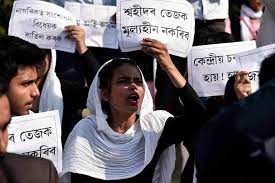 In the article, “Will Democracy Survive in India” (Upfront, Patricia Smith, 2022) I learned that in India there were rules that were put into place that targeted Muslims and other minors. Keep in mind Muslims make up 14 percent of India’s population. When Bharatiya Janata Party (B.J.P.) was elected these rules were put into place. Some of the rules are that girls are not allowed to wear hijabs to school or have interfaith marriages, and they prohibited the eating of beef. Muslim people have been protesting against islamophobia but things for Muslims and minors have been declining because this is extremist groups targets Muslims and other minors.

I think that Muslims are being discriminated against and it is unfair to those people when they have done nothing to B.J.P.. Party is a horrible man for doing this to the Muslim people and the minors. Especially when he interfered with Mulism’s and the other minor’s religions.

How could other countries or people help minors in India?