In America we say we value equal opportunity, but have we accomplished it?

Home In America we say we value equal opportunity, but have we accomplished it? 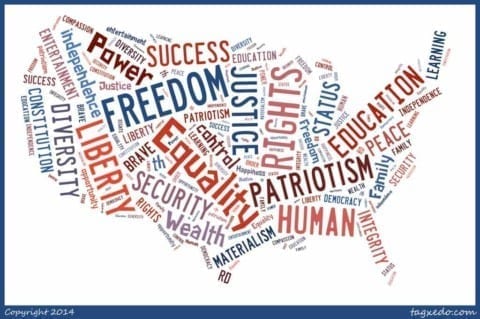 Americans believe that everyone is created equal.  Thomas Jefferson was the first person to use the phrase “all men are created equal” in the United States Declaration of Independence (US 1776) which was written during the beginning of the American Revolution.  This statement is one of the most important American values because it specifies that we hold it as truth that everyone is equal and shares the same basic rights of life, liberty, and the pursuit of happiness. “Why shouldn’t men and women be treated the same? To have equal rights and equal pay, that should really be our aim” (Perry).

Historically, the word “man” or “men” was used to imply “humankind” so this statement was not intended to be sexually discriminatory.  It applies to women as well as men.  No matter what race or sex, all people are equal and are entitled to the same privileges.  Unfortunately, this has not always been the case.  During America’s early history, women were denied many of the key rights given to male citizens. Married women were not allowed to own property and had to give their husband any money they earned. No females had the right to vote. They were expected to focus on housework and motherhood. Since then progress has been made. In the 1920s an amendment to the U.S. Constitution granted women the right to vote.  But still, in some southern states, African American women were unable to vote until the 1960s.

The Women’s Rights Movement began in 1848. Fighting for their natural born rights.  “Never doubt that a small group of thoughtful, committed citizens can change the world. Indeed, it’s the only thing that ever has” (Mead). Margaret Mead made this statement after observing cultures around the world and how cultures develop, and how change is brought about.  Women fought for the right to vote.  A second wave began in the 1960’s to address other issues including equal employment opportunity which led to an equal rights amendment.

It has taken decades for women to enter the workforce and be recognized as equal to their male coworkers. Still, there is  a large gender wage gap. Men’s salaries are higher than women’s.  The Washington Post published that, “the gender wage gap just shrank for the first time in a decade” (Paquette). The U.S. Census Bureau reported that women are closing the pay gap with men. White and Asian female workers have seen more income growth than men, but women still make less money as a group than men.  Wages for Hispanic women have remained stable, while pay for African American women has declined. The female to male earnings ratio is 80.5%, the highest ever and up from 80% in 2014 (Paquette).

More women are working in the technology industry.  The New York Times reported that “the tech industry has made progress that is ‘good but not sufficient’ Satya Nadella, said the chief executive officer of Microsoft” (Hsu).  In addition to equal pay for equal work, there is the issue of equal opportunity for equal work.  In the technology industry, as in every other occupation,  there is still a long way to go.

I truly dislike your post, “In America we say we value equal opportunity, but have we accomplished it?”because this wage gap theory that you claim is true has been debunked multiple times.

One sentence you wrote that stands out for me is: “Still, there is a large gender wage gap. Men’s salaries are higher than women’s” I think this is untrue because the statistics that you backed up your claim with is irrelevant because of the broad data that it used. The polls that were taken simply compared the average wage of men to the average wage of women. Certain factors were not taken into play such as the type of jobs the people had, or the amount of vacations taken and anything that might impact the salary of a person. Statistically, men go into more higher paying jobs than women do, and if companies could pay women less, than all men would be out of a job because hiring more women would mean an increase in profit. For these two reasons, I believe that you argument is invalid.

Thanks for your writing.

Heather! This is a great piece. I think you should have included the inequality of race, and more issues that show that America does not value equal opportunity. Broadening your topic will challenge you to organize a lot of information into one, persuasive piece, and further prove the point. Great use of quotes and information. Your writing is very organized.

Hey Heather!! I really like your question and discussion. I think this topic of equal rights, especially towards women is really important, because it has been a constant issue in our society. Not only do we pride ourselves on being free nation, but also an equal one. To say that I feel like we need to start recognizing our injustices in America. I really like how you brought up instances where women were of lesser importance in the past and the present. It gives the reader a good glance as to why we need to take this issue seriously, if we ever want true equality in America. In my opinion we all deserve equal opportunity and nobody can take that away. I found this link on statistics of equal opportunity between men and women (http://work.chron.com/male-vs-female-statistics-workplace-america-23880.html) It’s really interesting because there is still so much injustice that exists, not only for women, but for so many other groups of people as well. I hope you right again about this issue!! I’m glad you are trying to make a difference.

Heather,
I liked the topic you chose to post about. I thought it was interesting how you focused on the inequality that women have faced and still face as part of the American Creed. I have similar viewpoints as you in this area so it was interesting to read what you had to say. The gender pay gap is still a huge issue today, as well as the opportunity gap. For example, in fields such as cardiology and orthopedics, less than 15% of the surgeons are female. I think it would be interesting if you researched some specific areas of study where women are typically the minority and see what the pay difference is. http://www.heritage.org/testimony/women-and-opportunity-the-modern-workforce I found this article interesting because it helps define wage and opportunity gaps that women experience today. I hope to hear about what you think of the article in future posts!

Heather,
I really liked your post! I think that you bring up an interesting point of whether America really has achieved equality. Some of the evidence you used about women in the workforce suggests that America really has come a long way. However, in my opinion I still believe we have work to do. Like you said, there’s still a gender gap of women and men in the workforce in industries like technology. I also think that there are other ways that America has to improve on equality, whether it’s in terms of gender, sexual orientation, or race. It’s interesting to see how all these forms of equality/inequality have evolved in the years, and how much farther we still have to go. I enjoyed your post very much, and I look forward to seeing your future posts!

Thanks Sophia! I like that you brought up gender, sexual orientation and race. Though I didn’t touch on them I feel strongly about them. Thank you for the great feedback!