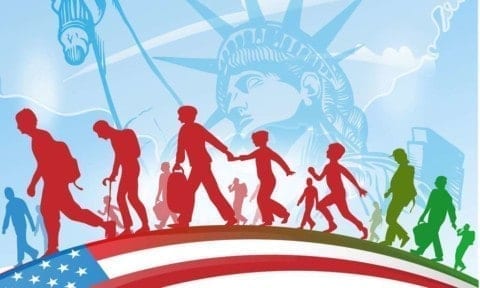 There are a lot of people that have been impacted by immigration and often the people seen on the news and talked about are Latinos, Their families are being separated and dehumanized. In an article by Vox news by By the writer Dara Lind, she talked about an announcement that there´s been a lot of families separated and “Between October 1, 2017 and May 31, 2018, at least 2,700 children have been split from their parents. 1,995 of them were separated over the last six weeks of that window — April 18 to May 31 — indicating that at present, an average of 45 children are being taken from their parents each day” (Lind). That causes people not to feel safe. The United States needs to stop separating families at the border and stop dehumanized Latinos because they are people like everyone else.

To begin, Family separation needs to end. Recently there was an article published titled, “7-year-old migrant girl taken into Border Patrol custody dies of dehydration, exhaustion” from  Washington post By Nick Miroff and Robert Moore. They wrote she “died of dehydration and shock after she was taken into Border Patrol custody last week for crossing from Mexico into the United States (Miroff and Moore). This instance about how immigration is treating people with less power makes one angry and furious because how they are treating people unfairly. To continue it says “the child began having seizures at 6:25 a.m., CBP records show. Emergency responders, who arrived soon after, measured her body temperature at 105.7 degrees, and according to a statement from CBP, she “reportedly had not eaten or consumed water for several days” (Miroff and Moore). On the fact how they didn’t even give her water in the day she was there with them or at least a blanket so she could cover herself. They should be more careful on how they treat people just because they are immigrants doesn’t mean they could get treated as animals. The CBP, detention center, is not going to take responsibility about what happened instead they blame the dad, but they separated them. This story shows that separation is bad because the father could not see her or help her. They were not together. In an interview with an “immigrant” who is  is 22 years old from Guerrero, Mexico that crossed the border  to have a better future for her kid that´is now 6 year old discusses the situation and says, ¨family always have to be together so they could protect themselves and just seeing stories of how family had been separated scares me because like I’m a mother so I feel if they take my child I feel I’ll die because I don’t know where he will be at¨ (Cadena). If this does not stop there can be more death happening to children. How would government officials feel if they had to be separated from their children?

Secondly, it is important to remember these immigrants are people like everyone else too.

Additionally, remembering that latinos come to the united states to have a better future an have education. To add on there’s an article publish title “How Latinos Are Shaping America’s Future” by Hector Tobar they wrote “57.4 million in 2016, or nearly 18 percent of the population, according to the U.S. Census Bureau. In most places where the locals say a community “feels” different from what it did a generation ago, Latinos are the reason They account for more of the nation’s demographic changes than any other group” (Tobar). The fact that the title is called “latinos are shaping america’s futures” meaning that we just come to the united states with our family leaving violence in our countries trying to make a change in the united states, kids going to school trying to accomplish goals in life. Parents working all day for their kid to have a establish life style. Making all the things we can in the communities so immigration could stop separating people including showing Trump that we just want a satisfied life.

In conclusion the fact that families are being separated from their family is not fair because it causes a lot of problem making people be afraid and not let us have a better future. Us humans and hispanics we should be able to change this all the dehumanizing against our community and immigrants as I said before we just come to the United States to have a better futures and help our family that are left behind. Writing this had made me think as a Hispanic young lady all the people of our generation could be able to change all of the violence and separation that immigration has done to families.

Miroff, Nick, and Robert Moore. “7-Year-Old Migrant Girl Taken into Border Patrol Custody Dies of Dehydration, Exhaustion.” The Washington Post, WP Company, 13 Dec. 2018, www.washingtonpost.com/world/national-security/7-year-old-migrant-girl-taken-into-border-patrol-custody-dies-of-dehydration-exhaustion/2018/12/13/8909e356-ff03-11e8-862a-b6a6f3ce8199_story.html?noredirect=on&utm_term=.d2761009dc97. This source is about the little girl from Guatemala that died from dehydration. This source is trustworthy because there using the exact information to what happened to the little 7 year old girl.

Cadena, Liz Noyolzin. “Interview with Liz Cadena.” 12 Dec. 2018. This source is about a immigrant that cross the border to come to the united states because where she’s from there alot of gangs and violence including drugs and she wants her kid to go college and have more opportunities that she didn’t have.

Kashinsky, Ivan, and Karla Gachet. “How Latinos Are Shaping America’s Future.” National Geographic, National Geographic, 19 June 2018, www.nationalgeographic.com/magazine/2018/07/latinos-hispanic-power-america-immigration-future/. It talks about how latinos had been since a long time and actually had made a change on the community with their nighbords and the fact there’s different cultures that have a good bond.

Starting off, this is really well done. You have clearly addressed what the issue is and have provided solid (albeit horrific) examples of what’s going on with border patrol and immigrant families. While I’m totally down for countries being open bordered, other people are not as eager to have foreigners coming into the country. This could be another talking point for you. You mentioned how these immigrants are just people who want a decent life for their family, you could try to find an article that has opposing views and then refuting it. Doing that would give your blog more credibility. Keep up the great work, let me know if you need help finding an article like that.

Hey, thank you for reading my article and giving back nice feedback I really appreciate your time. Some question i have for you will be what school do you go to? It will be nice to share things out to each other about the topic and like are you MEXICAN?

I was very interested about your post, “Immigration Separation,” because there are lot of families that are being separated and that is not right because like you said they come to the United States for a better life. Also I knew that migrants that were in border patrol custody were treated badly but not to the point were they let people die of dehydration that is just inhumane. One sentence that you wrote that stands out to me is “7-year-old migrant girl taken into Border Patrol custody dies of dehydration, exhaustion”. I believe this was unnecessary because she is just a little girl that wanted to be with her family in the United States for a brighter future and for immigration to treat her the way that they did was not right. Thanks for your writing. I look forward to seeing what you write next, because I like how people who read your post can see what is happening to latinos and we can try to make a difference by speaking up.

Thanks for taking your time and writing a positive comment I really like that you agree with me.

Hey Jocelyn i seen that you go to the same school that i go to but i had never seen you hope we could hang out someday and talk about immigration. thanks for taking your time and writing to me!!!!!!

To start off good job on completing your blog i know you’ve worked very hard on it. What i like about your blog is how you included about some of the harmful things immigration has done to children and how it can be changed. I also like how in one of you lines you included immigrants are being dehumanized by the border patrol. I think you did great on showing how they are not being taken cared of and how they are being treated. Good job keep working hard to get better at writing.

Dear Maria,
I thought that your blog was very inspirational and that it was very meaningful as well. I can tell how much this topic meant to you tis’ very good 🙂
from, jennifer

I am moved by your post La separación de inmigración,” because… The information about separation from families for the migration look terrible in average the separation de families is 2,700 children have been split from their parents one sentence you wrote that stands out for me is:” unfortunately this not for I think this is very bad because… with the new reforms of migration this no stop thanks for you writing. i look forward to seeing what you write next, because… do you have very reason about this topic about the migration and the reforms the migration.

Thank you Alejandro for reading my article are really appreciate that you took your time and gave me some feedback and what you like. I’ll be writing more about different topics and i also look forward to read some of your work.