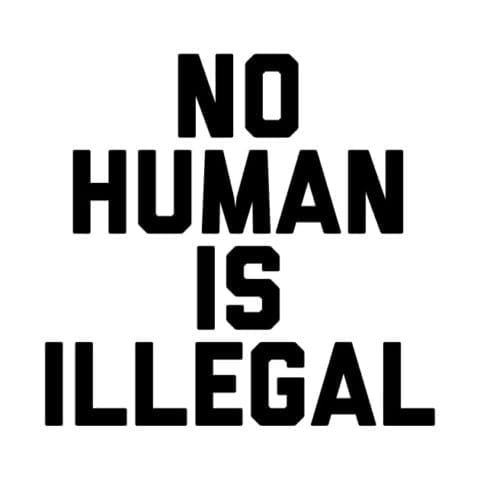 According to our primary and secondary research, the public issue being addressed is Immigration reform and health and the issue matters because all lives should equally receive healthcare options for a long lasting life despite the fact of their citizenship status and it would be an act of dehumanization in the land of the free if they don’t receive those medical/food resources like everybody else.

It is important to see that immigration is a public health issue because Immigrant Children often severely struggle with mental disorders which can cause them to die earlier than others. In an article named Caring Across Communities: Addressing Mental Health Needs of Diverse Children and Youth by De Milto L, it talks about the program they offer to refugee and immigrant people that gives mental health services and why they are doing it. Basically, informs what the organization, Caring Across Communities: Addressing Mental Health Needs of Diverse Children and Youth, does and their motives. And their mission  reads, “Children from immigrant and refugee families are at higher risk than other children for depression, anxiety, lack of self-esteem, social isolation, lack of social integration, and undiagnosed mental health disorders. They have limited access to mental health care, and often come from cultures where getting help for mental health problems carries stigma.” (De Milto L). This implies  the fact that children from immigrant families are of higher risk developing some sort of mental disorders than a child who is not from an immigrant family. This could be due to lack of  healthcare access in the community and often the system is not diverse, which can make immigrants feel less comfortable. People don’t trust the system often.  These mental disorders can  be stuck with these children for their rest of their lives which leads to an unhealthy life and a short life. If health options continue to be a problem for them, their mental health will worsen so badly that it will be irreparable. These immigrant families are seen as subsidiaries because of their undocumented status. These struggles with their mental health will probably affect other aspects they do in life, for example education and jobs. Immigrants are well known for their stereotypes which are that they steal jobs and that they are criminals and illegal. If they don’t get healthcare they need, these stereotypes will continue to live on.

Aside from immigrants having a lack of health care options not only  leads to developing mental health disorders, often immigrants don’t take care of their own life because they prioritize their children over themselves.  In an article named, The impact of local immigration enforcement policies on the health of immigrant hispanics/latinos in the United States, written by many authors who contributed an investigation. In this investigation, they wanted to understand how the immgration enforcement policies affected the use of healthcare services for hispanic/lantix immigrants in North Carolina. Their outcome from this investigation reads, “Hispanic/Latina mothers sought prenatal care later and had inadequate care when compared with non-Hispanic/Latina mothers. Participants reported profound mistrust of health services, avoiding health services, and sacrificing their health and the health of their family members.” (Rhodes). When the results were examined, they saw that hispanic/latinx mothers seek for prenatal care much later than normal mothers usually would and that once they did, the care that they would receive was insufficient. Also, there was a lack of trust for the healthcare system and family members sacrificing their health for others. These mothers shouldn’t be in a situation where their limitation of healthcare options is a threat. Healthcare is not enough for them, it isn’t helping as much. These families are given healthcare options that give no effects to a robusting life. This is an act of dehumanization by making healthcare accessible an obstacle for immigrants. This act was probably not made intentionally but these families are struggling. These immigrant families shouldn’t depend on one solution which is sacrificing. This is also dehumanizing by making life cost another when all lives shouldn’t. Hispanic/latinx are mostly affected by this issue which makes sense because most of the immigrants that come to America come from latin countries. But that still doesn’t make my team and I question why they have “ inadequate care” unlike other mothers.

My team and I created a 20 questions survey and had 23 participants fill it in. All of these participants were from the Bay Area, specifically Oakland. My team and I believed that Oakland residents had more access to healthy foods than to the healthcare system since Oakland has a huge food bank accessible for anyone. My team and I then reviewed the survey and saw that 65.2% (15) of adults who took the survey don’t live off of food stamps but 34.8% (8) of adults do. Also, we found out that 39.1% (9) of respondents have reported that they have been denied from health care and 60.9% (14) have not or are not sure. Furthermore, Only 4.3% (1) of respondents are against the healthcare system and 95.7% (22) of respondents are not. 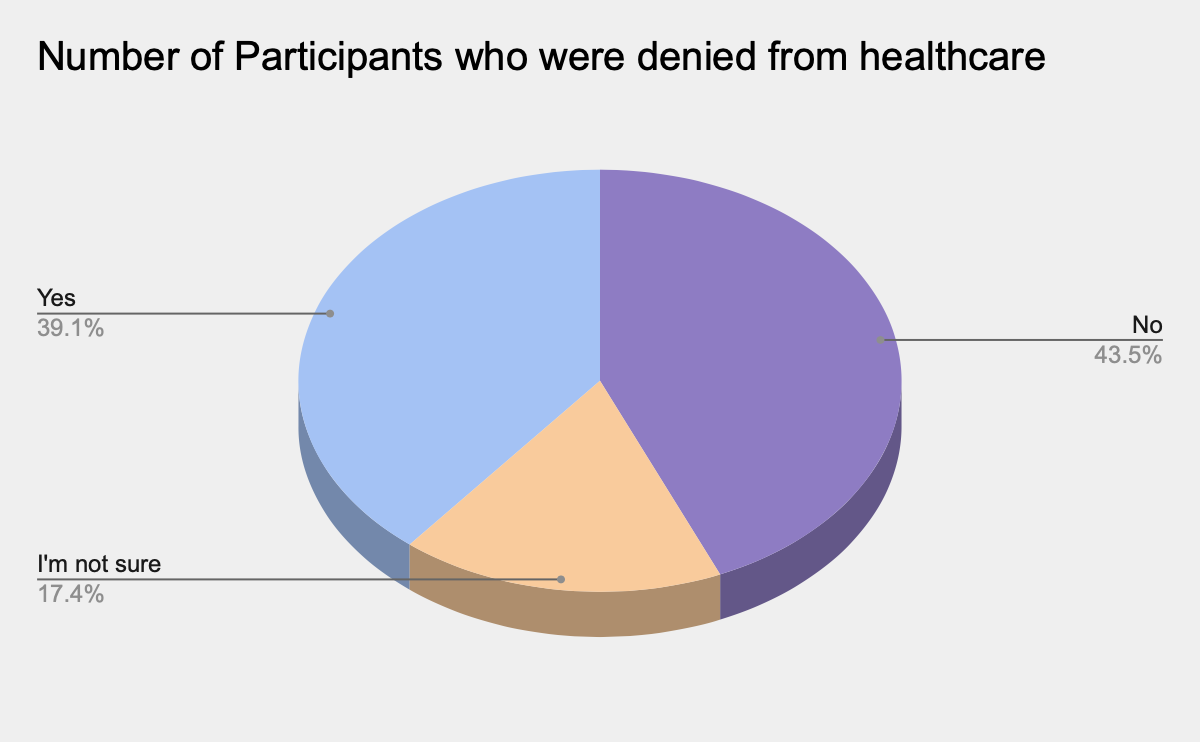 Figure 2: Participants who live off from Food Stamps. This bar graph shows that people who do live off of food stamps and the people who are not sure are an equal amount. It’s under 5, so it’s 8 of them. This argues that more people have access to healthy foods than the healthcare system and that there are people who get food from food stamps which might be a sign that they struggle to purchase food from grocery stores. 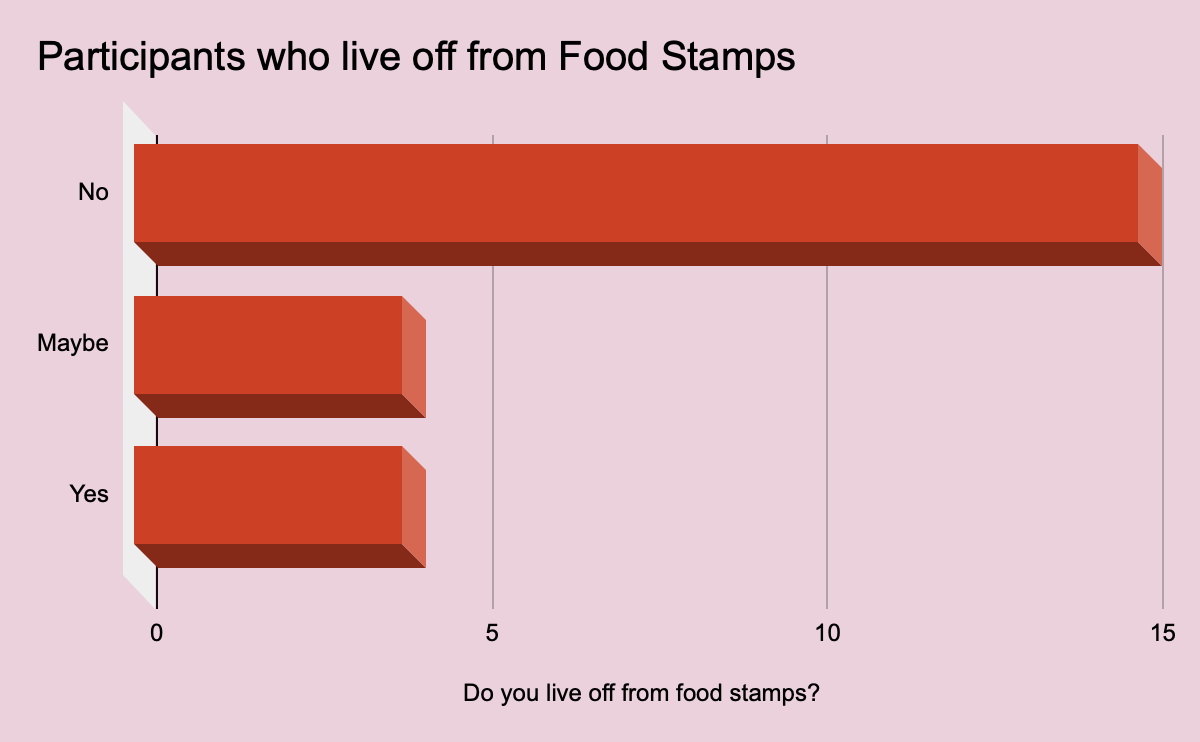 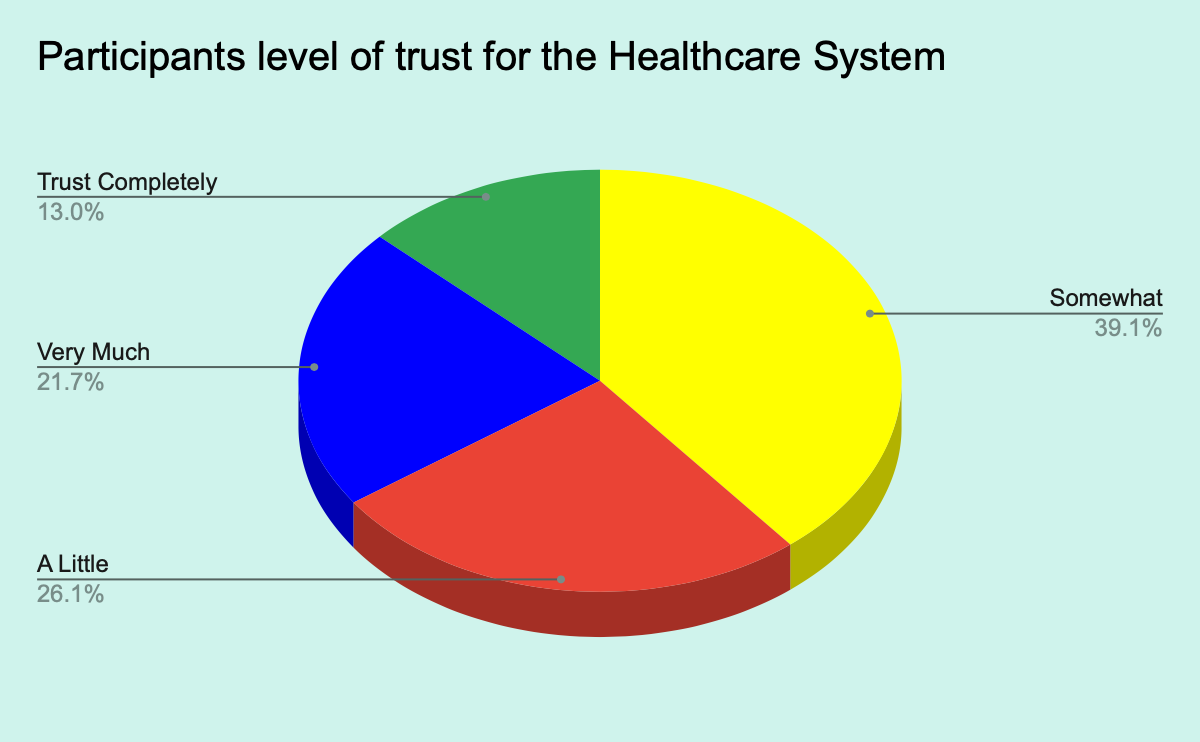 Based on our survey data, the community, Oakland residents, needs to be aware of the need to have more health care/food resources available to them and why it’s so important to them. If most of the participants have been denied from the healthcare system it would make sense they lost trust in the system. Therefore we have come up with aims that we hope will solve our public health issue.

Aim #1 Virtual: Educating the people on Social Media about why Healthcare is important for immigrants as much as it is for US Citizens

My team and I believe that our community believe that when immigrants have  limited  access to healthcare, this makes a difference to their health. Immigrants are degraded in our system. If these immigrants still have mistrust for the healthcare system, they might develop some sort of disease or condition that they are not cautious of. Not just that, but they might also be struggling to provide food for their family. We want our community to be aware of the present resources they have. If they are not able to purchase food from grocery stores, we want them to know that the food bank is always available. So we have decided to use the Social Change tactic, Media & Propaganda. We also decided to create a statistics sheet. In this sheet, it will include facts about immigrants and healthcare and the food banks in Oakland. This sheet will be titled  “No one is illegal in a stolen land.” Most of these statistics and available resources that we will include in this sheet will be from our secondary research,  that is our supplies for our aim. We plan to use no money for this since it will be typed and posted on our social media. Our team has individual personal social media so we will be posting them there. But we are well aware of the impediments that we might face during this action which are that people will disagree or apathy.

Aim #2 if Shelter in Place Ends: Start a petition to build Hospitals for Immigrants only in every state

In my second paragraph, I mention that hispanic/latinx mothers had looked for prenatal later and once they did receive care, it did not help as much as it did with other mothers. Most immigrant families receive healthcare that is usually not enough which leads to one family member putting themselves in danger so others will not. So my team and I decided to use the Social Change tactic which is Building Alternative Institutions and thought of building hospitals for immigrants only. These hospitals will give out resources and medical care that is actually needed and helpful. Immigrants NEED health care and these hospitals might possibly be their only option/resource. These hospitals will also include mental health resources. These hospitals will be located in every state, especially in the Southern States, which are California, Texas, Arizona, New Mexico, etc. But we plan to first start in California. And if it works we start a petition in every state so that a hospital is available for immigrants all over the country. Our budget depends on the hospitals that will be built. My team and I are aware that some people might disagree on building these hospitals, xenophobia and racism. We know that if we do this, we might not have enough signatures and these hospitals will not be built in every state.

Aim #3 If I had no limitations (unlimited funding and access): Fundraising money to buy medicines, do check ups, and give out food/healthcare resources to immigrants that have just arrived to the United States

When immigrants first come to the United States, they come here for economic opportunities. But what does not come to mind for them is the medical needs for them. Which causes health issues for both sides of the border. These immigrants might not be aware of the diseases that they might be bringing to America. So in order to keep both sides of the border safe, my team and I have thought of giving out medicine, checkups, long lasting foods, and food/medical/mental health resources so that they know their resources once they come to America. This action connects to the Social Change Tactic: Civil Disobedience and Direct Service. Of course, the supplies that will be needed for these actions are the medicine and foods. But both can be expensive so we will fundraise money to get all of it. This action will happen all across the border. We will also have another pedition so that many people can help us do this illicit action. Challenges my team and I know we might face so that there won’t be enough money or that someone will tell the authorities about this illegal action while signing the pediton.

Finally, thank you, Gavin Newsom, for taking time to listen to us and the issue my team and I will hope to fix with your help. California holds the most immigrants than any other state. That would mean that millions and millions of people struggle to stay alive because they don’t receive medical care or don’t have enough food. We need to help these people. No one should struggle like that all and it shouldn’t be because of their citizenship status. Everyone deserves to live a long and healthy life. We hope that even a little help from you, we can change this for the better. Thank you, Gavin Newsom.