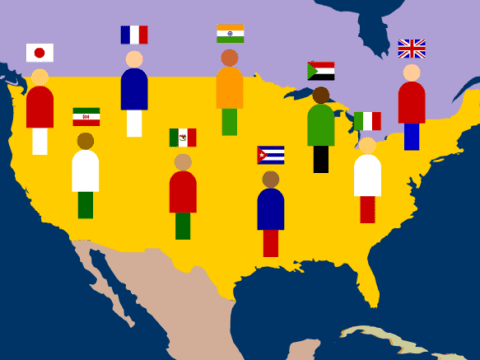 I chose immigration as my political issue because I knew it was a prominent issue but I was not very educated in the topic. Ever since Trump became the president I have noticed that many more people discuss immigration but I was not very educated in the subject. I have heard many discussions but I never really learned in detail about immigration in school, and I have never spent the time to research it myself. First I discovered that many of the stereotypes around immigration are blown up, and in reality the issues that people are worried about are having a minimal effect on the country. Secondly I learned about how difficult the issue of immigration is within the united states.

The first article that I chose to read went in detail about certain facts that challenges preconceptions about immigration. The article used factual evidence from poll research to support his claim that immigration stereotypes, for the most part, are not true. I learned that most Americans are not actually worried about issues that immigration could cause. In our current society, according to The Atlantic, fear that immigrants bring crime, take jobs from native born families, or damage the economy are at an all time low. Coincidentally, a poll also revealed that the amount of people in America that believe immigration helps to strengthen the country are at an all time high. This article was very interesting because it defaced common stereotypes about immigration and provided evidence that suggests immigration might not be that serious of an issue in the eye of the general public.

Contrary to what The Atlantic may say, journals.openedition.org argues that immigration is such a big political issue because it is one of the most important issue for voters. The issue becomes very complicated in regards to politics because the federal government has to set the numbers and rules for legal immigration, but the opinion of the country shifts and varies from state to state. There are many different opinions within the federal government which also lead to a difficult time decision making. Another factor that ties into the issue is the moral component which most definitely affects politics regarding immigration.

As the two articles show, there are some contradicting opinions on the issue of immigration in the United States. Some polls show that stereotypes are not always correct, and other information suggests that immigration is still an extremely important issue and that the debate is still being argued from both sides. Either way, the issue has a high level of complexity to it, and it will continue be debated for years to come.

Articles I used and annotated:

Hi Chris, I really enjoyed your article because you touched on such a contradictory topic. I really liked how you pointed out that your sources said our stereotypes may not be correct. “…there are some contradicting opinions on the issue of immigration in the United States. Some polls show that stereotypes are not always correct,…” I really liked this comment because you got your information from an article that took polls. I think that it is important to get many peoples opinions on important debates not just 1 or 2, and you choose and article that used polls. https://static1.squarespace.com/static/573ba69bcf80a1323384f7d6/t/5a254aa553450a9dabcd2c24/1512393382315/Timberlake_et_al-2015-The_Sociological_Quarterly.pdf.I found this article that goes more into the stereotypes of immigrants and how we can “get over” the stereotypes, I think you will like it because it has charts that tell you information about certain stereotypes. I have heard stereotypical slurs in my school and I like that you wrote about some stereotypes being wrong.