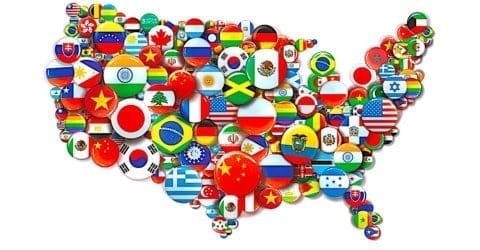 In recent years the topic of immigration has become one of great importance in both political and personal ideas. According to the Pew Research Center in 2018 the US admitted 22,491 immigrants into the US, this number is down 31,225 immigrants admitted from 2017. The reason for this is possibly due to the lowering admissions cap. The admissions cap is made by Congress and is the set number of immigrants allowed into the US. There are many reasons why people choose to migrate to America. The main one being that America is seen as the land of opportunity and the places in which these people are coming from have economic and societal hardships that they are trying to get away from. Many of the people who immigrate to America, whether that be illegally or legally, come to look for a better future for themselves and their families.

Many people decide to immigrate illegally to the US due to the low admission cap and the rigorous and long process of becoming a legal US citizen. Those who immigrate illegally choose to do so because they feel they have no other choice and feel threatened in their home country. In 2017 the Trump administration decided to create the “zero tolerance policy.” This policy made it so that 2,800 families have been separated at the US-Mexico border. Supporters of the zero tolerance policy claim that it is to help trace illegal immigrants and to ensure that all members of a family are actually with their real family. According to Jessica Vaughn with the Center of Immigration Studies, “smugglers know that migrants who cross the border with a child are often released until their asylum court hearing. So many migrants cross the border with children who are not their own.” It is understandable why government officials would want to insure families are truly related to one another but separating young children from their parents is not the way to go about it. Although there may be a few who are truly not related the majority are related and it is unfair to assume the worst of someone when their situation is unknown.

The topic of immigration has become very popular in the field of politics, especially with Trump and his proposed border wall. The topic of a border wall has been a center point for Trump since the beginning but would it really work? The quick answer is no. Immigrants are desperate to get into America and will do anything they can to achieve it. Having a border wall would lead to more people dying trying to get into America. This is because people will find more dangerous ways to get across the border such as swimming through the ocean or digging under the wall. There are many problems with building the actual wall some of them including: the cost, natural barriers, and Native American land. According to Ron Nixon with the New York Times, “it would take 70 billion dollars to build the wall and 150 million dollars to maintain it.” Natural barriers would include the Rio Grande River, and the Otay Mesa Mountain range. According to the American Immigration Council, “the Tohono O’odam Nation runs along 75 miles of the southwest border, and members of the tribe have already stated they will not allow a border wall to be built on their reservation…federal law requires the federal government to consult with tribal governments before constructing on the land. Without the tribe’s support, the federal government could resort to condemning the land and removing it from the trust of the Tohono O’odam Nation.” Overall building a border wall would not be good for America because of the immense cost and the fact that it is against federal law to build on the land of the Tohono O’odam Nation.

I believe our government has a very long way to go regarding immigration. I believe border security passes should be required to come in and out of America and extensive background checks should be required to those who are planning on living in America permanently. I do not believe that we should shut out those who are in need of help the most. We as a nation should not discriminate on people based on where they were born. These people coming into our country should be welcomed and cared for not rejected and pushed out. All they want is a better future for themselves and for their families and turning them away is not the American way. We are a country made of immigrants and we need to welcome our new age of immigrants who are coming to America, not to cause chaos and corruption but to create a better and more fulfilled life in their new home.

Hey Pauline,
This was a very interesting post to read. I agree with you on the idea that we shouldn’t shut out those who are seeking asylum because our country is a place of work and living. I also agree with you that border security is very important when it comes to those who come into the country. Here is a link you might find interesting https://travel.state.gov/content/travel/en/us-visas/immigrate/the-immigrant-visa-process.html

I agree with you on this topic how we should have extensive background checks going in and out of the country. I really think you gave a lot of facts too that were good and they helped me understand more about immigration.