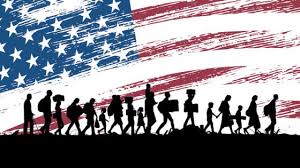 The United States is known as a melting pot – a country with different people, “Mexico is the top origin country of the U.S. immigrant population. In 2017, there were 11.2 million immigrants living in the U.S. were from there, accounting for 25% of all U.S. immigrants. The next largest origin groups were those from China (6%), India (6%), the Philippines (5%) and E1 Salvador (3%)” (Radforce, Para 9), the immigrant population is still increasing nowadays.

Why do immigrants come to the United States? Immigrants are here for a couple reasons: democracy, freedom, and equality. Throughout history, the United States of America has been deeply related to immigrantion. The United States has been made up of immigrants since the very beginning. For many years the United States has opened its doors to people who are searching for freedom, equality, religious protection and more opportunities for a better life and pursue their own American dreams but there are still face a lot of challenges. So here comes the question: “What does it mean to be an immigrant in America?”

One of the top challenges is the language barrier. Language barrier can make everything difficult. For the aspect of their child’s education, it is hard to the immigrants to go to their child’s parents conference. Also just like the language problems, cultural barriers affect every aspect of life for immigrants, it can cause a lot of misunderstandings, for example, from my own experience, sometimes it is hard for me to figure out people are real angry or just joking, I understand the conversation but the serious face always makes me doubt myself, is that real angry? Some stereotypes are happen based on the cultural misunderstanding.

In the book American Born Chinese. It is a graphic book written by Gene Luen Yang. The character Chin-Kee behaves in ways of many American racial stereotypes of Chinese in terms of accent, dress, hairstyle, physical appearance, eating habits, academic performance, and hobbies in the school, which makes Danny who was American born Chinese worries about his image at school. This experience caused him to reject his Chinese culture but eventually he found his identity again due to his time with Chin-Kee.

Throughout this book, the question. “What does it mean to non-white be American?” and “What does it mean to be an immigrant in American?” come in my mind again. These two problems are mutually reinforcing. This book talks about the stereotypes of Americans to Chinsese, the main character Jingwang lived in Chinatown during his childhood growth,which is a symbol of American Chinese. To the immigrants in America it is different meaning to be an American through daily life, different habits, different cultures and different backgrounds, even maybe different thinking for one thing. The author uses Chin-Kee who come to the United States from China to visit Jinwang every summer to make a contrast of Jing Wang, shows the different between American born Chinese and native Chinese, and the difference between American born Chinese and other white-Americans. Furthermore it is a symbol to show the life between the White-Americans and immigrants by graphic. This aspect helps address the essential question of “What does it mean to immigrants be American?” because life is a challenging to asking who you are and who you want to be in life.

The immigrants used to be considered as taking Americans’ jobs. President Trump come out the new immigration policies (Raise Act) to improve the U.S. economy and the job market. “He has called for a crackdown on illegal immigrants, saying they ‘compete directly against vulnerable American workers.’ He promises to cut back legal immigration with new controls he says would ‘boost wages and ensure open jobs are offered to American workers first’” (Preston Julia, para4). “Hillary Clinton, his Democratic rival, takes an upbeat view, saying immigrants contribute to the economy whether they are here legally or not, by providing labor for American employers and opening businesses that create jobs for Americans rather than taking them” (Preston Julia, para5).

Over the years, America has become more diverse and accepting as a melting pot. Diversity is one of the signs and symbols of the United States which is a nation combines with difference and accept difference, that is enough. More and more immigrants come to America to realize their dreams and exercise their precious freedom compared to where they used to live.

Good paper. Even though we’re all basically immigrants it can be hard getting used to new people. I hope that this can change and we all get along better.