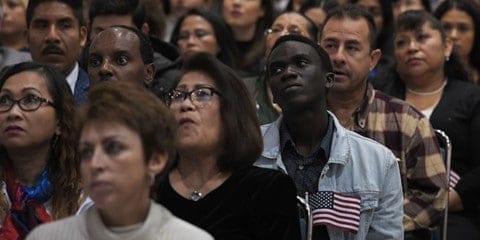 Firstly, immigrants deserve respect because they try to get jobs to help their family. In the article titled, “Key findings about U.S. immigrants” BY JYNNAH RADFORD it talks about the amount of immigrants that help in working. He explains “In 2017, about 29 million immigrants were working or looking for work in the U.S., making up some 17% of the total civilian labor force” (Radford). This article is credible because it talks about how immigrants try to get jobs so that their children can have a better education, there are more immigrants in the United States than any country in the world, the United States represented the amount U.S. immigrants. I interviewed my mother, I asked her why she decided to come to the U.S? She explained so that me, you, and your two brothers can have better education in the future and to learn new objects that we didn’t learn in Guatemala (Tomas).

On the contrary, some people think Immigrants take jobs from current Americans. According to “What Are the Jobs That Immigrants Do?” by Krystal D’Costa she explains, “A major point of the current government administration’s immigration platform has been that immigrants are taking jobs that should go to native-born Americans (D’Costa). This is unfair because they are just trying to get jobs to have a better job and life.

Additionally, immigrants want a better education for their children. They want to have the opportunity to have an education for their children that they didn’t have the opportunity in their country because they have to help their family to work. They came to the U.S. to start a new future for them and their partner they take the public school. Immigrants often come to the United States to seek education, especially higher education. They take the California English Language Development Standards for ELD.  The immigrants take the English language development because they start to learn English that they can have better jobs went they finish middle and high school (California Department of Education) When immigrants take the ELD class that’s when they start their new level to learn their new language of English and to learn about new history.

In conclusion, people come to the U.S to have better jobs and education for their children. They are not stealing jobs but finding opportunities. My family came here and I want to be a nurse in the future.

The article talks about the amount of immigrants who are trying to get jobs or who already have jobs because the immigrants just came in the United States to have a better jobs. They wanted to work very hard so that they can have better jobs for them and for their children, like my mom, I see her that she works so hard.

I am totally relatable with your post, “Immigrants.” because my family and I are also immigrants and that my parents immigrated to the U.S. mainly for my older brother and me to have a better education. They also decided to move to the U.S. in order to seek more job opportunities and able to take care of my grandparents as well as unite with other siblings. One sentence you wrote that makes me feel connected with you is when you interviewed your mother asking her about the reason why she decided to move to the U.S. Likewise, I remember I did ask my parents the same question because, to be honest, at that time I did not want to leave my country, Vietnam, because I did not want to leave behind my group of friends who I was really close with, my neighbors, my teachers, my school, etc. Being able to navigate through everything in a completely new country was never easy for my parents, but they were willing to sacrifice for my brother and me for our bright future ahead. Another sentence that I felt connected with you was when you talked about taking ELD classes. I remember I had to take ELD 1, 2, 3 classes before I could take English 1 class like how my other classmates were effortlessly enrolled in. Let me tell you, it is okay for us to take a different path than everyone else to reach the final destination; everyone is different from each other and we should really take part in whatever is tailored to us. What I got out of while taking ELD classes was I got to befriend with other friends who have a similar background as me, we became friends during class and after class and became study buddies to help each other passing all the classes. In addition, I do agree with you that every immigrant deserves an opportunity to get jobs in the U.S. so that they could have a better life that they may not be able to obtain in their native country. I also believe that it is based on the person’s competence and the skills they have in order to get accepted into their desired jobs. Instead of thinking the immigrants take away jobs from the Americans, we should rather look at the immigrant’s perspectives, their backgrounds, where do they come from, there are many more untold stories we do not know about them that we should be culturally sensitive to.

Thanks for your writing, Remigia. I look forward to seeing what you write next because I want to know how your journey turns out as an immigrant, whether our American Dream is similar or different from one another.

Dear Remigia, thank you for sharing your personal experiences and feelings in regard to immigration. I agree with you 100% that immigrants are not stealing jobs but are only finding the opportunities they can in order to help their family. I really appreciate how you added in statistics such as the percentage of citizens who are immigrants in the U.S. and how the U.S. is actually the country that has the highest and most diverse rates of immigration. I am a daughter of two strong immigrants who came here from a completely different country too, and I have been working towards my goal of being a nurse too! Just like your experiences have inspired you, mine has as well. Great job on your post!

Hey Remigia, my name is Bryan Quezada. I am currently attending SJSU. My parents are from Mexico and also came here at a young age to seek a better life and better education. Although my parents were not able to complete high school due to teen pregnancy, it was up to us to complete that dream my grandparents had for my parents. I am here having this chance at SJSU because my grandparents chose to come here to give a better life for the generations after my parents as well. I am proud to be a son of immigrant parents. I agree that there is a huge stigma on immigrants taking jobs from Americans. It is totally unfair and very incorrect. Immigrants have to work harder to get a job, and it is even harder with no legal documents. Nothing is given to immigrants, they work hard for what they want, and I am glad it is usually for their family. Immigrants want the best for their family just like any other non immigrant family, everyone deserve chance at a better life. As well as an equal opportunity for a chance at higher education. Great Job, I really enjoyed it, and felt your passion.

Dear Remigia,
Thank you for sharing your experiences. Immigrants are big issues, and your post was very insightful. You provided data to support your statement that why immigrants want to come to the U.S. For better jobs, better educations, and a better future.
One sentence you wrote that stands out for me is: “people come to the U.S to have better jobs and education for their children. They are not stealing jobs but finding opportunities. ” I totally agree with you that people are looking for opportunities. They work hard, and they deserve to have a better future. However, why do people still don’t like immigrants? It’s also a big issue to think about.
I am also an immigrant, and I came here to seek better educations and a better future. I also note you want to be a nurse in the future. the United States has a lot of opportunities for us to pursue our dream. Catch it, and make it come true. I look forward to seeing what you write next. Thank you!

Remigia, You were very effective in the way you began your blog–discussing your personal experience. Have you considered other counterarguments regarding immigrants? Maybe you can play on the rhetoric of our current administration to strengthen your argument like debunking other stereotypes or myths. Keep writing about topics you are passionate about!

Remigia – thank you for writing on an important and misunderstood topic. Your passion is evident in the writing, and I appreciate that you added your personal experience by interviewing your family. I think your argument would be stronger with more data to support your ideas. If you say it is unfair, back that up with some evidence and outside sources. For example, find the numbers that prove that immigrants start businesses and create more jobs than they “take”. That will help you fight against those who disagree with you. Overall, I liked your article and I think adding the information about the English language test was a smart use of information to infer how immigrants feel about America and becoming American.

Dear Remigia, I feel that this is a very controversial topic. A line that stood out to me was when you stated, “ They are not stealing jobs but finding opportunities”. This stood out to me because lots of people think that immigrants come here to “steal jobs” and that’s a very common misunderstanding, and although I agree with most of your points, you mentioned that immigrants come to the U.S. for better education and a better life for their families a lot, do you think that there are other reasons why people may come to the U.S.? Thank you for sharing this information and writing this blog. Looking forward to your next piece of writing!

Education is very important and this matters to immigrants so much more than people think. It is what people look for when they immigrate. They are looking for better opportunities and an education that will help them in life. They search for a better lifestyle and education is one of the priorities.