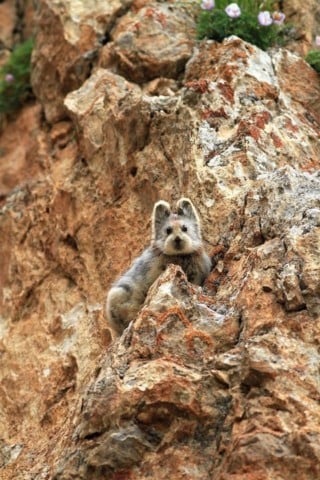 “Magic rabbit” – Ili pika (Ochontana iliensis), was discovered in 1983, is a small mammal only 20 centimeters long that’s native to the Tianshan mountain range of the remote Xinjiang region of China. There are many reports that Ili rabbit has similar cute face like a teddy bear, which may be attributed to its pair of big ears. In fact, Ili rabbit’s ear length and hind foot length are the longest among all rabbits. Illi rabbits’ coat color are brighter than other rabbits and they have lighter-colored brown spots on their forehead and both sides of the neck. In winter, their coat color will be even more brighter.

They live on sloping bare rock faces and feeding on grasses at high elevations. This little creature is close to become extinction — the population of Ili pika declined by almost 70% since 1883 so there are less than 1,000 left now. This is because its habitat is being drastically affected by climate change. “Ili pikas were originally found at elevations between 3,200 to 3,400 meters. Now they have retreated to elevations of 4,100 meters”, there is nowhere else to retreat. Rising temperatures have forced the pikas to retreat up into the mountain tops. In addition, grazing pressure from livestock and air pollution have likely contributed to their decline too.

“In 2008, the International Union for Conservation of nature added the animal to its list of endangered species, though the animal still has no group seeking to protect it from disappearing off the face of the planet.” However, I do not want this cute creation disappear. Also, because Ili rabbit eat alpine herbs, its excrement can be used as a medicine, known as grass grease. In addition, due their living condition, there is less change in gene so their genetic quality is relatively pure, which can become a natural pure breed of medical laboratory animal. So, how should we protect them and let the population grow again?

Research: “We have to save this cute rabbit dog thing before it’s too late”, “China’s ‘magic rabbit”, “’Magic rabbit’ nears extinction in China “