If You Think About The Robotic Future!!

Home If You Think About The Robotic Future!! 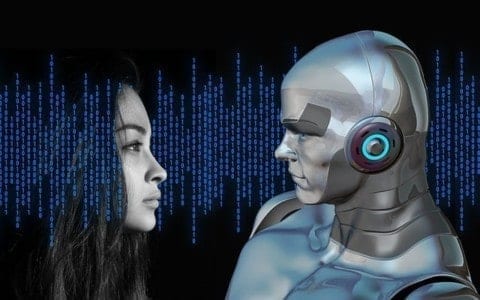 We have not thought to our self’s about all the technology that is surrounding us, we have only thought about the simple question how does it affect us? Perhaps the question that we have been answering has not been rephrased in another way for example, How will technology affect humanity in the future? Probably there is not much to say about this because you might thing everting will be alright or you may have another idea that humanity might be replaced. Well here is my theory, you might not be inters but, it could leave you with something to think about. Before I made my choice of what I thought humanity would be like in the future I did not have much interest, I just know that a phone was a phone, a computer was a computer, and so one and so forward with what we used in a daily life bases involving technology. It never accrued to me that tech was used for other things until I read several articles and my scenes of technology had a whole other meaning. An article name The Real Cyborgs written by Arthur House is about how technology is helping people,”When he lost his right eye in a shotgun accident in 2005, the Canadian filmmaker Rob Spence replaced it with a wireless video camera that transmits what he’s seeing in real time to his computer.” This man lost his eye and he would of most likely would not have been able to see but, because of the advance technology that has been created it was possible for him to see again. I never though that tech will come to the point to be inside of someone. I can see this in two ways, it is grate that he can see and in that way other people can be saved and do thing they could not do. On the other hand it can be kind scary to not only see it but, also how something natural is combine with something that is artificial, since in the same article it explains how this is to become. ” Quietly, almost without anyone really noticing, we have entered the age of the cyborg, or cybernetic organism: a living thing both natural and artificial.” We can see how technology has pros and cons but behind all the technology, how is it created, by how, and what are the intentions. We can now see that people are not the only ones that can make a cake, there can be a robot that can make one and even better since in lot of companies many people have be fired because they have found a better replacement and nonother then a robot. You may not see it as a robot but, as a machine. This machines as you may see them and call them are created by people, human, us, same goes with the technology that we have today. The fist and seconded question has been answered but what about the third one, what are the intentions. Well if we would be replaced it will be because of us. In the article name Our Robotic Future it states the following,” Robots seem to be just as good or evil as their human creators choose, which is perhaps what worries us.” I guess all along the right question has not been made. If we are going to be replaced with robots it would be that the creators have made them evil enough that we got to that point.

My opinion is that if we are replaced or not either way it was because of our choice. A better question to ask is Based on our use of technology, how will we affect our own humanity in the future?