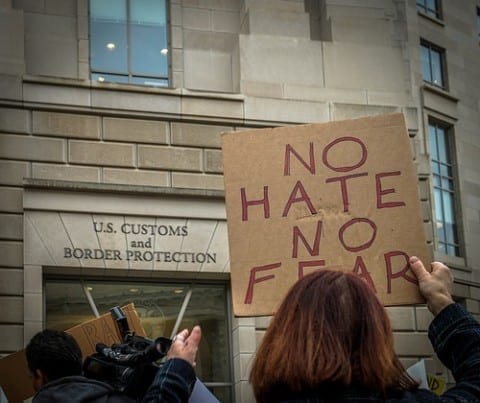 Is ICE really needed to control immigrants? ICE stands for immigration customs enforcement and they have over 20,000 agents and 400 offices in the U,S. They also go to certain cities to arrest immigrants that had already crossed the border (U.S. Customs and  Border Protection). Immigration in the US is complicated right now, but ICE is not a solution because they dehumanize immigrants and are inhumane.

Firstly ICE is dehumanizing and inhumane. In an article titled ”ICE Is Using An Alternative To Immigrant Detention. But It’s Inhumane.” by Ruthie Epstein, it tells the reader how ICE is inhumane because they put ankle monitors to track immigrants. She explains  how “A Honduran woman who experienced electric shocks, bruising, hair loss, headaches and difficulty breathing after she started wearing an ankle monitor.” This shows how ICE is inhumane because the woman was dehumanized and therefore  had trouble breathing after she got beat and got eletricuted. Additionally in the same article it states “A mother from El Salvador, suffered inflammation and bleeding around her ankle and numbness in her leg due to her ankle monitor.” And later in the article is explains that  “A third woman, from Mexico, was hospitalized for the sores that spread over her body after her ankle monitor was put on.” These evidence proves that ICE is very dehumanizing towards immigrants since they are hurting people just because they are coming to this country. This evidence also shows how ICE is inhumane by them beating women until they have to be hospitalized. Just because they come to this country illegally doesn’t mean ICE can hurt people however they want that’s why we need to change how ICE treats immigrants. The main question is what Cruz thinks about ICE and his knowledge about ICE and what they’ve done. Ricky Cruz is a case manager in Life Academy. Cruz feels, “ I know they kill a lot of people crossing the border, I know they treat Immigrant people like if they were dirt, they rape people so when I see ICE I think about the worst possible human being that could work for such an organization willing to rip kids away from parents real inhumane”(Cruz). Cruz uses the words “rape” and “kill” to emphacise that ICE is inhumane.

However, we need some type of immigrant control, just border control, because if there wasn’t any border patrol the country would be flooded or overpopulated with people/immigrants. From the website Border Patrol Overview it explains why we need some protection. This article explained its mission and why we need border patrol. The article states “The priority mission of the Border Patrol is preventing terrorists and terrorists weapons, including weapons of mass destruction, from entering the United States” (https://www.cbp.gov/border-security/along-us-borders/overview) . This quote explains how not having border patrol would be dangerous since there would be weapons and mass destruction coming into the country and they dont want that to happen. Furthermore Border Patrol Overview explained how many drugs they gathered from people smuggling in drugs, ”In FY 2012, Border Patrol agents on the Southwest border seized more than 5,900 pounds of cocaine and more than 2.2 million pounds of marijuana” (https://www.cbp.gov/border-security/along-us-borders/overview). This shows that we need some border patrol because if we did not have border patrol there would be a lot of people in this country and way more drug use. A solutions is to take away ICE and just have border patrol. We don’t need ICE since we already have border patrol. Cruz feels without ICE and only bored patrol“ It would be more peaceful.” This quote shows how ICE is not needed since they bring enough oppression into the community. For example, undocumented people being scared to live their lives like a normal person would because they are scared to go outside. Parents having their kids on strict rules because their scared that their going to rip their kids away from them.

I interviewed Ricardo Cruz because he is a case manager at Life Academy and has experience with immigration and ICE. Cruz has also lived in Oakland for a long time.

Dear Ulises,
This blog post was very informative and enlightened me on a subject I did not know much information about. I can tell you are very passionate about this topic and I appreciate it. ICE not treating immigrants like human beings is such a big issue in America and should be talked about more with sources like yours. I appreciate how well known you are on this topic. I would encourage you to check out out own blog! http://nycasafehaven.home.blog

Hi Ulises!
I had no clue that immigrants were being tracked by ankle monitors by the ICE! This is really interesting to me because I know that ICE is out of control sometimes but I didn’t know it was this bad.
I definitely see a correlation between ICE and police brutality. And I like your post especially because immigration is an extremely important topic today as well as the inhumane conditions that immigrants and children are being put in today and it’s crazy to me that nothing is being done.
Thank you for sharing! You learn something new every day.
Natasha Harris

Dear Ulises:
I am shocked by your post, “ICE is inhumane,” because I was not aware of the ways the ICE agents tracked immigrants. Your research on ankle monitors and the effect they have caused on many women is appalling. As a person that comes from an immigrant family, it is very sad to think that many immigrants are being exposed to this inhumane treatment. One sentence you wrote that stands out for me is: “This quote shows how ICE is not needed since they bring enough oppression into the community. For example, undocumented people being scared to live their lives like a normal person would because they are scared to go outside.” I think this is important because I had never thought about just not having ICE. Now that you point it out, it is true that border security is the main service that we need. If the border security patrol do their job correctly, there would be no need for ICE workers to be terrifying immigrants. Another sentence that I agreed with was: “This evidence also shows how ICE is inhumane by them beating women until they have to be hospitalized. Just because they come to this country illegally doesn’t mean ICE can hurt people however they want that’s why we need to change how ICE treats immigrants.” This stood out for me because attention needs to be brought to how ICE treats immigrants in order to bring about reform to ICE policies. Your post reminds me of something that happened to me. One time I went to Mexico to visit family over winter break but I did not go with my parents. On the way back, the border security/ ICE agents were very hostile to the uncle I was traveling with asking if my parents were illegally crossing the border through the desert. I was appalled they even asked that to my uncle. We all had legal papers to cross the border but they still asked that simply because my parents were not with me. It was very sad to experience. Therefore, I think it is very important that you chose such an urgent topic to write about. Thank you, I enjoyed reading your post.

I like the way you explained why we don’t need ice agents to control immigrants.

I really like the research you have done, these articles are an awesome way to bolster your argument. Especially using the works of RIcky Cruz, who is a perfect person to use for this topic. I liked how your second paragraph offers a solution to this issue; however, I feel that it’s a little vague. To many people who live near the border, ICE is a way for them to feel safe (however misguided this may be) and they may feel like removing ICE is putting them and their families at risk. That’s possibly another direction you can take the blog. Another way to strengthen your blog is to talk about the cruelty in which ICE detains immigrants, primarily children. Here’s an article from Time magazine as a place to start looking into that (http://time.com/5485344/migrant-children-christmas/). Keep up the awesome work!