An Accident in the Street

Home An Accident in the Street 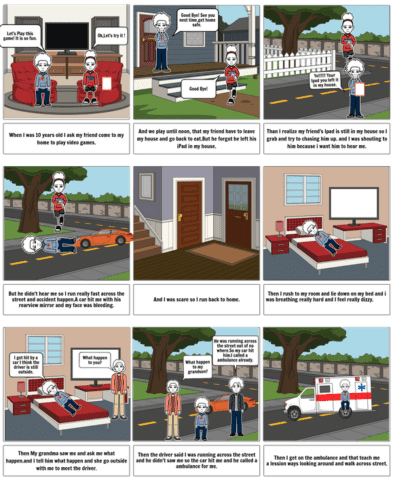 I remember the first two years after I came from China to America. And because I was bored at home, I always invited my friend from school to come to my house to play games, especially shooting games. He also just come to America and he also speaks Chinese.

Because he was the first one that I knew from that school, he had become a really good friend to me.

One day, I invited my friend to come to my house to play video games. My friend came outside my house and knocked on my door, He yelling my name. When I hear him, I opened the door and he walked into my bedroom. There was a big bed at the right, and a computer on the left with two chairs and my iPad was charging. We played shooting games until noon.

My friend said, “I have to go back to eat lunch, My mom told me to come home at noon.”

I asked, “Are you coming back after you are done eating?”

My friend replied, “Probably not but I can come tomorrow.”

After my friend left I was going to keep watching movies and eating chips, but I saw his Ipad are still on my table. I don’t want him to come back again because he lived really far away from my house, so I decided to rush out of my house and look for him. I saw him across the street.

I yelled, “Yooooooo, you left your Ipad at my house.”

But I think he was too far away from me and he had his headphones on so he didn’t hear me.  I decided to run straight to him and I didn‘t look around the street. In my neighborhood of Brooklyn, there were not that many cars. The street has a lot of tall trees, higher than the buildings and each building has its own yard. I didn’t even think or looking around the street I ran really fast, trying to catch up to him.

So when I ran across the street, an accident happened. A car’s rearview mirror hit me in my mouth and my face was bleeding.  Blood was everywhere on the ground. When I first got hurt I felt really dizzy and then I started crying and ran back to my house. I ran straight to my bed

Then the driver tried to find me so the driver ran straight outside my house and start shouting,

My grandmother was a really calm person but when I got hit by the car she was getting very scared and panicked. At that time my grandma was at home and she heard the driver shouting.  She saw my face was bleeding so she knew what was happening. She was really scared and confused and I told her quickly what happened. Then my grandmother told me to go outside and the driver saw us.

The driver said, “Kid, Are you okay? I called an ambulance for you, they are coming as fast as possible.”

My grandma said, “What happened to him? I was at home and I saw him come in with blood on his face.”

The driver argued, “I was driving my car and when I drove he came out behind some car and I thought  he was trying to run across the street but he didn’t check if there was a car, so my car hit him.”

My grandmother said,” I don’t know what actually happened but I will call his dad first.”

The driver promised, “When his dad is here, I will tell him what happened.”

Then the ambulance came and they took me to the hospital. All my family members came to see me.

When I think back on that moment, I remember to always think before you do something. Before this I always are acting very busy, always rushing everything but after this accident, I became a really calm person. And I always tell myself that.

Dear Zheng hao Chen
I am very impressed by your post, “ An Accident in the street,” because it’s very thrilling and dangerous that got hit by the car rearview
One sentence you wrote that stands out for me is: “Then the driver tried to find me so the driver ran straight outside my house and start shouting“ I think the driver has a responsibility because he didn’t run away and he felt guilty about what he did to you.
Another sentence that I was: “I remember to always think before you do something.” This stood out for me because it’s very important that you put your eyes on the road when you cross the streets.
Thanks for your writing. I look forward to seeing what you write next because I’m very interested in your other story.

Dear Zheng Hao Chen
I am happy with your post, “An Accident in the Street,” because it’s really interesting and dangerous.
One sentence you wrote that stands out for me is “A car’s rearview mirror hit me in my mouth and my face was bleeding. Blood was everywhere on the ground. When I first got hurt I felt really dizzy and then I started crying and ran back to my house.” I think this is embarrassed for you because after the car hit you, you were crying and you ran out to your home and you didn’t wanted to show your mama what happened with you in the street.
This reminds me of an experience I had once because that happened with me once and that really stands out on me because a car almost kills me when I was 10 years old.
Thanks for your writing. I look forward to seeing what you write next because I like how you explain what happened with you and that really makes me think I’m living the history I real life, looking at you while you crying and the ambulance takes you to the hospital.

I feel you. When I came to the US I was bored too. Everyone is busy with their work.

Dear ZhengHao:
I really enjoyed, your post, “An Accident in the Street” because, it’s shows that even the driver hit you he still have loyalty to the law and need to fix his mistake.
one sentence you wrote that stands out for me is “My grandmother was a really calm person but when I got hit by the car she was getting very scared and panicked.” I think that is emotional, because as your grandmother personality is calm, but she didn’t expecting someone of her grandson will got hit by the car. In addition, honestly when the car hit someone it’s really scary.

Hey ZhengHao, I loved how you said, “I remember to always think before you do something.” I think this is an important lesson for all of us to learn since we can easily overlook the effect of our actions. We can hurt people or things in the careless things we do and by being aware, we can prevent a lot of mishaps. I too have had a similar experience in which I ran across a street without thinking. Fortunately, I wasn’t hit by a car, but the experience etched into my mind, the importance of thinking before acting.