I Believe in Self Confidence

Home I Believe in Self Confidence 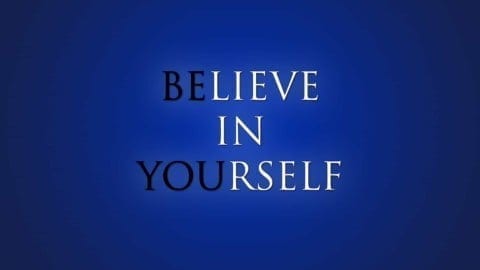 I have always felt that self confidence is an important trait to succeeding in life, and I guess that’s one of the reasons that I have always considered myself an optimist. Although self confidence cannot be conjured out of thin air, it is in my opinion that one must realize that it is one of the many requirements to succeeding in life. At the very least, success cannot be achieved (or at least it’s attainment made significantly more difficult and improbable) if you do not at least believe yourself that it is possible for you to do so. This has proven true in a number of instances in my life, and that is why I firmly believe that you can only succeed if you believe that you can.

I think that this belief of mine has manifested from having a supportive family growing up, who have taught me over many years to believe that I can succeed in whatever task I face. Whether that be preparing for a test, trying to learn a new move while playing soccer, or even just trying to beat my friends in a video game, I’ve always been taught that the first step to accomplishing something is thinking that I can. For example, learning how to juggle a soccer ball (meaning bouncing the ball off of your feet, legs, and upper body to keep the it in the air) was very hard for me at first. In fact, I thought it impossible for me to do, as the ball kept going off at weird angles and away from me. But eventually, after realizing that if the rest of my team could do it, so could I, and trying and trying again, I was able to finally juggle the ball (at least a few times). This success taught me not only that I can succeed at what I put my mind to, but that thinking that I can do something is the first step towards accomplishment.

This belief has also helped me academically. I can be somewhat of a procrastinator, which means long, grueling pieces of various homework (most often being math problems) are left until the later hours of the night for me to complete. One night, on a particularly long assignment, I was initially discouraged from doing it, as I knew it would take a long time and would be very tedious. I told myself, however, that I had the capabilities to do the homework, and that delaying doing the homework was just making it longer. Two hours later, I had finally finished the problems, while also showing myself all the work I was capable of doing.

Accompanied by the stories above, I believe wholeheartedly in the conclusion that people must believe in themselves in order to accomplish anything in school, at work, or in life. This philosophy has helped guiding me through my life so far, and I believe it will continue to help me for a considerably long time into the future.

I really like this piece of work, I also believe that self confidence is important as if you never believed in yourself you wouldn’t have been motivated to do anything in the first place, with the mindset of “I cant”. I appreciate this post as I feel like this could give others support and help when they need it, a good piece of advice along the way.

I agree with your post Conor. Having confidence is very important. This reminds me of “fake it till you make it.” I think that works.

Conor,
Thank you for your post! I really like your This I Believe essay. I agree that having self confidence is necessary for you to succeed. I think the personal story you told in your essay helps your audience connect with you and understand your opinion. I connected with your story because I also find in sports it is necessary for you believe you can do before you will be able to do it. Thank you for your post!

What I like that the reader put in his or her story is that you have to believe in something if you want to do that.