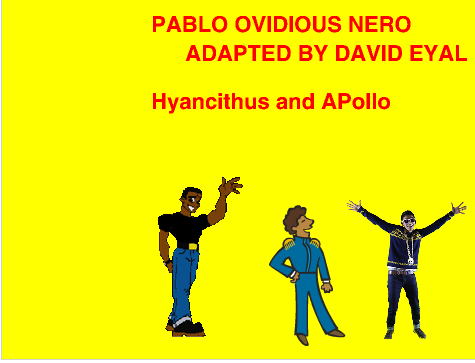 IT is the time of the Greco-Romans, and Hyancithus is the most beautiful man in Greece. All the lovely maidens want him, but he wants more. He wants a God. His two suitors, Apollo, god of the sun, and Zephyros god of the west wind, both want him. But he wants an olympian, and he chooses apollo. (don’t judge) He plays discus with Apollo and Zephyros uses the wind to strike him in the head and kill him for revenge. 🙁

TO create this beautiful animation that you see here before yourself, it took a long, grueling process. First I found a story to use. That was the easy part.  Then we had to write  a script of that and create and alternate ending. then we created our storyboards and change our characters. Finally we created it, the longest part which was mindless boring work.