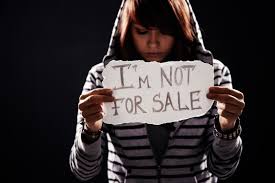 “At any given time in 2016, an estimated 40.3 million people are in modern slavery, including 24.9 million in forced labour and 15.4 million in forced marriage” (http://www.heatwatch.org/). Human/Sex Trafficking occurs more ofen than you think. Alameda County is thte county in California with the most cases of Human/Sex trafficking. It is known that 75% of trafficking victims are women (http://www.heatwatch.org/). This matters regardless of your gender because someone you know may be in danger here in Oakland. According to research, Oakland should be more aware about sex/human trafficking  because anyone can be a victim and being trafficked effects vicitims negatively mentally and physically.

Firstly, Oakland needs to wake up and notice trafficking because anyone can be a victim. In the article titled “The Victims” by National Human Trafficking Hotline, it mentions how there isnt a specific type of people  who are targeted it explains “The victims of this crime in the U.S. are men and women, adults and children, and foreign nationals and U.S. citizens. Although there isn’t a certain feature that you may have that will lead to being a victim. But it is more common for runaway and homeless youth to become victims of trafficking.” This shows that everyone is in danger and vulnerable. That means it is better to be aware of the issue

Secondly, Oakland needs to be aware because of the negative consequences to mental and physical health that are caused by them being trafficked as this quote from the article titled Mental health and human trafficking: responding to survivors’ needs, it concludes  “mental health problems – including depression, anxiety and post-traumatic stress disorder – are prevalent among trafficked people” the reason people need to be aware of victims mental health is becuase those issues to someones mental health will cause victims to self harm like cutting themselves or even worse committing sucide. If we are more aware of the situation, then we can also become more aware of the solution to the problem.

I completed a survey and gave it out to the  People in Oakland. The survey was primarily based on the communitys opinion on how much they now about human traffficking and the effect of human trafficking and if they know about the negative efffects. 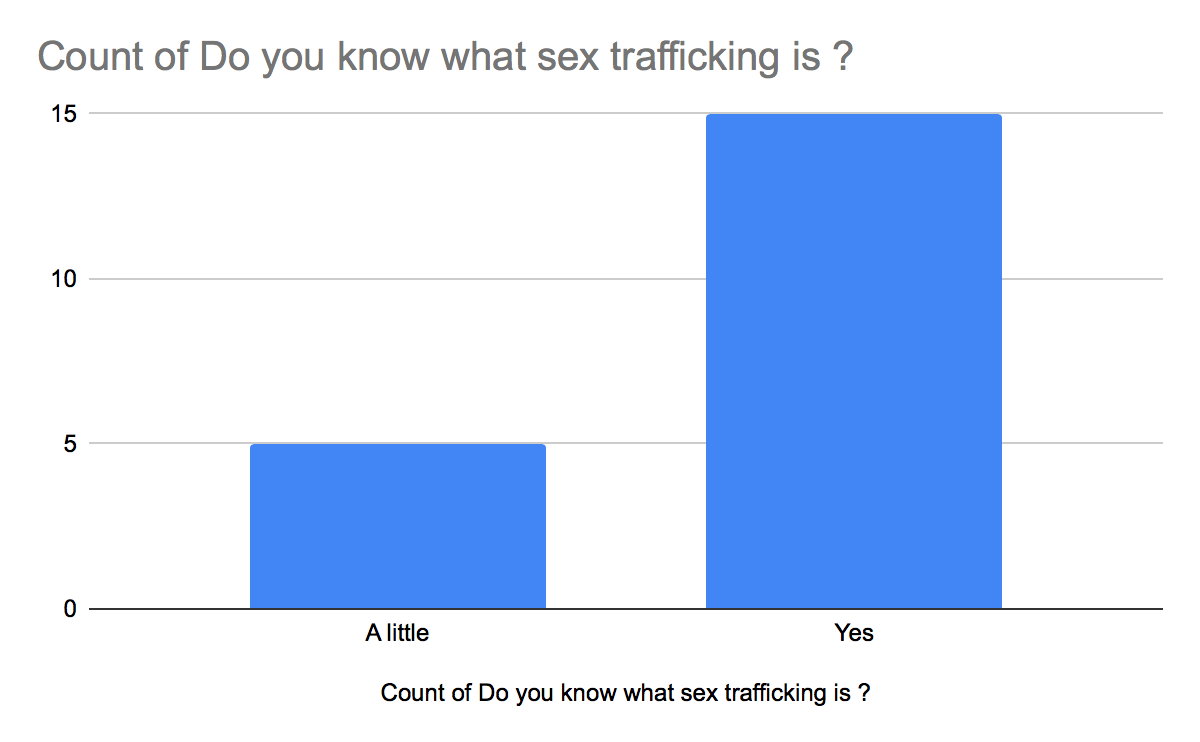 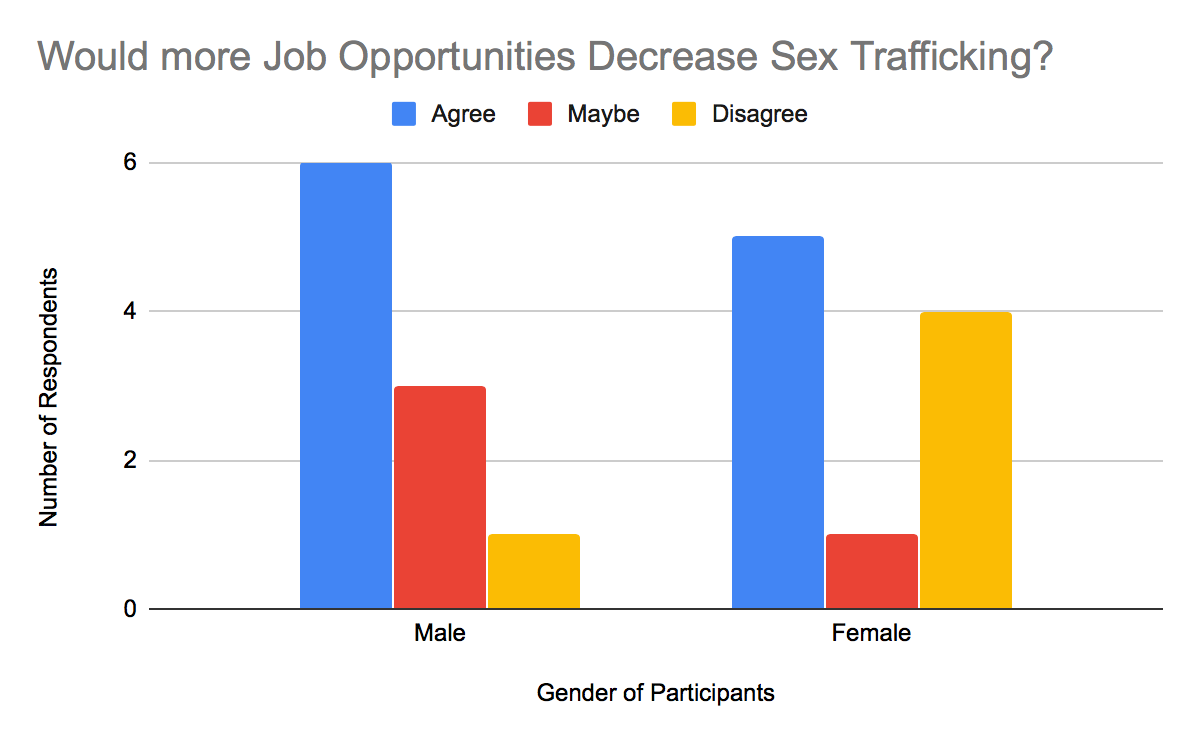 This bar graph is also made from our survey which ask people’s opinion if having more job opportunities for teens would decrease the number of sex trafficking, and 11 of the 20 respondents agree with that statement. !0 of those respondents are women and the other 10 are male. The reason I personally think more job opportunities would decrease the number is because in an article titled “The Victims” by The National Human Trafficking Hotline, they state “Runaway and homeless youth are vulnerable to trafficking.” This quote just proves that if the youth had a job, then they would have more opportunities to be successful and have less of a chance of becoming homeless.

To be an upstander for this topic i would post on youth voices, but not only that but i will make an instagram post linking all the important information and the contact information for help and support if you have spotted trafficking, or know someone involved in trafficking.

An aim I want to do to help get the word out for the Oakland community to be more aware of this topic is to make a post on instagram. Instagram is a good choice because many people use it from various age ranges to teenagers to adults with kids.  Another reason I think it’s a good idea to post on instagram is not only because it is easily accessible to many different people of different ages, but also because if there’s anything another person wants to add to give more information to the community, then they can send me a private message about the term or comment publicly under the post. Although posting on social media seems like a good way to get the word out to the community, there is a lot that could go wrong or not as planned. For example the post doesnt get as much attention as i hoped for, which that would mean that the percentage of people knowing what is human trafficking is would stay the same and not increase as shown in the bar graph that 75% of our survey respondents are confident of their knowledge of human trafficking. Which is obviously a good and high number, but i hoped the number could increase to at least 90%, so i need to be a resource for peoples knwledge of human trafficking.

The second aim would be focused on Job Opportunities. This bar graph is also made from our survey which ask people’s opinion if having more job opportunities for teens would decrease the number of sex trafficking, and 11 of the 20 respondents agree with that statement. The reason I personally think more job opportunities would decrease the number is because in an article titled “The Victims” by The National Human Trafficking Hotline, they state “Runaway and homeless youth are vulnerable to trafficking.” This quote just proves that if the youth had a job, then they would have more opportunities to be successful and have less of a chance of becoming homeless.

A third aim is to make flyers in class. The flyers would contain the website and number of the National Human Trafficking Hotline. That website would help you or someone you know is a victim of human trafficking. I would post the flyers around the school primarily around the entrance. I would also go to the Bart station in Fruitvale because there is a lot of foot traffic in that area, which would help get the  word out to the community.

In conclusion please be aware of your surroundings and be prepared and aware of any situation you are in if you are alone and in the dark which is when you are the most vulnerable to be attacked because your life depends on it.

This source is useful because it went straight to the point. It also is the hotline for human and sex trafficking. In the article it also has their number to call or text.

What You Need to Know About Human Trafficking Awareness Month. (n.d.). Retrieved from https://www.nsvrc.org/blogs/what-you-need-know-about-human-trafficking-awareness-month

This website helped me better understand what human trafficking is and the effects.

Nahum, this I a great articled I really apreciate it because it spreads awareness for a very, very serious issue. This resinates with me because my family being from other countries have told me awful stories about some things that occur in other countries. “Human trafficking victims have been identified in cities, suburbs, and rural areas in all 50 states”. People are under a false narrative that this is a foreign thing and that America is safe but it’s not. Our less privileged adolescence get trapped because they trust one wrong person and their whole life is either being forced into marriage or flat out being a sex slave. This post did make me think about this in a new light as the is modern day slavery in America but illagal. We all need to consider this more as one of the paramount issues in todays society.

Dear, Nahum I love your post. I think more people need to speak up about human trafficking. This is a serious and hurtful issue that needs to be addressed. Thank you for your post i look forward to seeing what you post next.