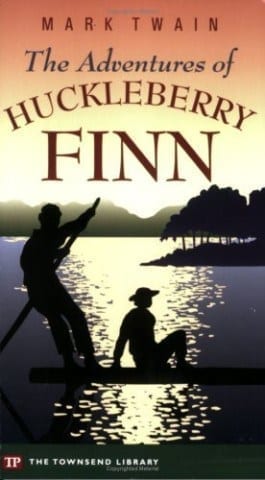 Our American literature class is currently reading The Adventures of Huckleberry Finn by Mark Twain. We are using dialectic journals to take notes by choosing a passage that represents the main ideas from a section of the novel and then recording our thoughts about it. Here is my dialectic journal from chapter five.

p. 19: “he said he was going down-town to get some whisky; said he hadn’t had a drink all day. When he had got out on the shed he put his head in again, and cussed me for putting on frills and trying to be better than him; and when I reckoned he was gone he come back and put his head in again, and told me to mind about that school, because he was going to lay for me and lick me if I didn’t drop that.”

During chapter five, Twain describes Pap and Huck’s relationship. Pap is an alcoholic abusive father that does not care about his child and uses Huck as a way to earn money or do physical labor. Pap is motivated by his own greed and his main goal, shown throughout the chapter, is to gain access to Huck’s money. This motivation is already proving to be an essential part of the story and I believe it will continue to play an important role.

An abusive relationship between a parent and a child has a lasting effect on that child’s future including the relationships they have in their lifetime. I think that this element of Huck’s past shaped his personality and will affect how he interacts with characters later in the novel. I wonder how this will affect the quality of his relationships with characters like Tom Sawyer and others he could potentially become close to.