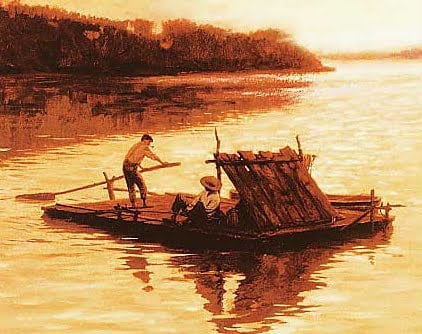 P. 105 “We said there warn’t no home like a raft, after all. Other places do seem so cramped up and smothery, but a raft don’t. You feel mighty free and easy and comfortable on a raft.” (Irony)

This passage shows immense irony. During these two chapters, Huck and Jim encounter a Shakespearean cliche story between the Grangerfords and the Sheperdsons. Those families were fighting for a long time for unknown reasons, kind of hinting an allegory to Romeo and Juliet in my opinion. These families were both rich and went to church, making Huck admiring these “civilized” families. However, upon finding the violence, he noticed that big homes and “civilized” families were brutal reality and not as good as the raft.
Through his experience, he faces great amounts of irony. These families followed most rules Miss Watson taught Huck, but the violence and bloodshed among each other for unknown reasons. This made him doubt humanity and what he learned from Miss Watson. Also, people viewed him as not civilized, travelling in the southern Mississippi River on a raft with an African American. However, in my opinion, Huck thought that civilization was on the raft, where it was tranquil and safe, and the riverbank and land represented danger, showing another part of irony. Using irony, I can see how Huck develops as a character throughout the story. I feel really bad for Huck right now. Poor kid.

Hi Joseph, you took this analysis in a really great direction. I agree that the feud between the Grangerfords and the Sheperdsons is reminiscent of the one in Romeo and Juliet. It’s interesting to think about these things from Huck’s perspective; from my perspective, I would choose solid land over the uncertainty that comes with being on the sea any day,. However, after reading, I can definitely see why Huck would think the opposite; he prefers his rickety raft much more than the “civilized” life on land. As the saying goes, one man’s trash is another man’s treasure.

I agree Joseph, the it was quite ironic how the “civilized” people were prone to violence, but the “uncivilized” Huck was not. I like how you related the Grangerfords all the way back to Miss Watson and her rules.

I really liked how you highlighted the amount of irony Mark Twain uses throughout the novel in order to make a point. It is interesting to see how society’s and Miss Watson’s view of what is civilized in actuality is much more uncivilized. Overall, I think you did a really good job of analyzing!

Interesting how you give an insight into the thoughts of Huck on civilization being the opposite of how the rest of the world sees it. I can understand where Huck comes from, and in some ways, I may even agree with him: civilization isn’t always civil.

Joseph, really nice job with your analysis. I think you did a really good job explaining the use of irony throughout the passage. I agree with you that this passage showed tons of irony and how it develops Huck as a character.

Wow, Great analysis! I really enjoyed how you used Irony to deconstruct the text, although I would push you to also analyze the society of the time period and not just what Ms.Hopkins has taught Huck. Doing this would bring your analysis to another level.

You were able to really analyze this passage in a way I feel a lot of people might not be able to. Which is amazing!! Overall there is A LOT of irony in this passage. I think it is a big deal to Huck, (who has never had a true family) that he learns it isn’t all about an upper class family who has everything. Jim is becoming his family and the raft is his home where he feels safe. ” Home is where the heart is” is an important quote that relates to this piece. Where you feel safe is your home.