How Will Utah’s Political Views Change Over Time?

Home How Will Utah’s Political Views Change Over Time? 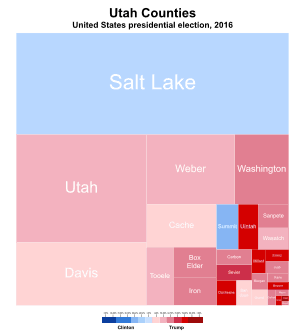 When travelling to other states, almost always, the first question people ask me after I tell them I’m from Utah is if I’m mormon. After I tell them that I am in fact not mormon, people usually look extremely surprised. When people think of Utah, they usually picture that almost everybody is LDS and that we see missionaries in white oxford shirts with a Book of Mormon in their front pocket on a day to day basis. While there are an extremely high number of mormons in Utah, we have been seeing more diversity over the last couple years.

According to Sperling’s Best Places, about 82% of Utahns are religious and of that 82%, 72% are mormon. Most mormons are extremely conservative, but there are arguments that Utah is actually becoming more liberal. In an article titled Utah: Very Republican, but Not Quite as Conservative as It Appears, they say “Salt Lake City has become more diverse, and Salt Lake County is now a swing county in some elections. Liberal pockets can be found, of all places, right around the L.D.S. headquarters in Salt Lake City, where many professional, non-Mormon migrants have settled. To the east, Park City, home to the Sundance Film Festival, is also fairly liberal.” Our mormon majority has began to shrink over the last couple years as well, giving way to a slight shift in political views.

Personally, I have definitely noticed a shift. Most of my friends are liberal and even some of my mormon friends are liberal as well. While the vast majority of Utah is still mormon and conservative, the demographics are beginning to become a little more diverse. With more out of state people moving into Utah, specifically Salt Lake City, it should be interesting to see how our political views change over the next decade or so, especially after our most recent presidency.

Very interesting topic, Sofia. I am also surprised by the way people act when they hear I am not Mormon, but from Utah. I agree that Utah is giving way to more liberal beliefs, and I am excited to see how that will turn out for us politically. It will be interesting to see if the stereotypes of Utah’s conservatism will change as well as Salt Lake City and Park City grow. As you said, there are many liberal LDS families in the valley, and I am curious to see how the population’s views will impact Utah’s political standing. I also was intrigued with the fact that about “82% of Utahans are religious and of that 82%, 72% are Mormon.” Here is a source you might what to look at to learn more about Utah’s politics: http://utahpolicy.com/index.php/features/today-at-utah-policy/13947-analysis-just-how-liberal-is-salt-lake-county. I look forward to reading more on this subject from you again.

Sofia, I think your article is highlighting something very interesting that is rarely discussed in the local media. However, while Salt Lake City is becoming generally more liberal, is it changing Utah as a whole? I think while Salt Lake City is changing in demographics and newer generations are straying away from the traditional views of the LDS faith, the rural parts of Utah are some of the most conservative in the Western United States if not in the entire country. I also think that while we are seeing a slight decrease in the numbers of Mormon residents in Utah, there is an increase in surrounding states especially Nevada and Idaho. I think it could be really interesting to see if this increase in LDS members outside of Utah is changing the political viewpoints of other states. I think it could also be interesting to see why so many millennials are leaving the church as well. Here is an article that may help you elaborate more on this topic.
http://universe.byu.edu/2017/06/01/religion-scholar-studies-why-millennials-leave-the-lds-church/

Sofia I thought your views in your post were very interesting. Living in Utah in my whole life I have definantly seen a shift from the strong mormon presence to more liberal views. I have gone to Catholic school my whole life so I have always been around liberal view. Recently I have seen a change people moving away from LDS faith in our highly populated areas like Salt Lake. I think it is because more people are moving here and it creates a more diverse area. I am very interested to see how Utah progresses in the next few years and how religion plays role.
Below I provided a link that talks about how religion affects government in Utah and other reason why the shift away from republicanism is happening.
https://fivethirtyeight.blogs.nytimes.com/2012/07/09/utah-very-republican-but-not-as-conservative-as-it-appears/

Sofia, I think you are absolutely correct in that as a state we are shifting away from being a mostly Mormon, conservative people. I definitely agree that the most of the people I interact with tend to be liberal, even if they are Mormon. While it doesn’t seem likely that Utah will ever be a state that votes towards the liberal side, I think the views are definitely shifting. You should check out https://fivethirtyeight.blogs.nytimes.com/2012/07/09/utah-very-republican-but-not-as-conservative-as-it-appears/, a blog post which offers some very interesting numbers about the shifting demographics of the state. I’d love to hear more on this topic and I’ll be back for more.

Sofia, I think that what you are saying in this article is very interesting. Living in Utah it has always seemed that our state is kind of held back by the religion that dominates the entire social atmosphere of the state. It is also nice to hear someone else mention the straying away from the LDS faith that can be seen in SLC and how we have came a long way to get out of this view that everyone in Utah is a member of the dominant religion.