How to reduce the rich-poor gap

Home How to reduce the rich-poor gap 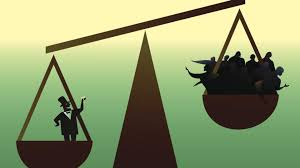 Before we answer this question, we should know what the rich-poor gap is and why is that so important. Parently, the rich-poor gap is the gap between rich and poor, also known as Economic inequality. In the economy, there exists a phenomenon where the rich get richer and the poor get poorer. Some people will keep being poor over generations and will stay in the lower class forever. They will never get a chance to change their lives, or even struggling to survive. The low income can’t stimulate the economics of the country which will decrease the GDP of the country. That’s why it’s so important to reduce the rich-poor gap.

So what can we do? First of all, education is always a significant one. I totally agree with the quote “Education should be a great equalizer, not a source of division” (CNN). Providing the same educational opportunities and resources in the public school to ensure the poor people have an equal opportunity to learn knowledge and change their lives. Knowledge is definitely the wealth for everyone.

The second way is to give money to the poor by taxing the rich and help with unemployment. I am pretty sure that most people will disagree with me on this one. Nowadays, AI occupies at least half of the job market, or even more in the future, some people’s skills become unnecessary. Some job positions will be replaced soon, but for the people who’re already too old to learn the new thing, they will lose their jobs no doubt. When people don’t have enough money to spend, the economy will fall. “more and more concentration of income and wealth in few hands”(Garima Mittal). The only way that they can get money is Welfare. Where is the welfare from? From the tax that rich people pay, especially indicates to the AI or technology companies. But what will be the benefit for them? From two perspectives, one is to appease the people from robbing, violent, and insecurity. Another one is to give them the money to improve and stimulate the productivities, which they can earn back the money in a different way. It will form a win-win situation.

This has always been a difficult social issue in every country, it won’t be as easy as I think. It might never be solved, but we should know that this is happening.

Hi Shuang! I like your take on the gap between the poor in the wealthy. Also, I agree with your opinion and I appreciate the ideas/information you provided. Personally, I have always agreed that education is one of the most important things to help the poor get better jobs and are in a higher wages. But, even though there are ways for these people to get good education sometimes they may not always know how to use it. They may not know how to get a good job or how to apply to jobs or how to even apply to colleges, etc. that’s why I think not only education is important but also teaching them how to use their education day-to-day. It’s funny how you you say people What disagree with you on taxing the rich because I definitely agree with you. I have always believed in this, especially when I know that there are people that are not even earning minimum-wage. While these multi millionaires are gaining so much money from the hard work that these people put in. it is a problem in many societies and in countries, and hopefully it will be resolved peacefully. There are those who don’t know what is going on, so hopefully they will be educated and not understand what is going on with other people. Thank you for your opinion! I do agree with you and it’s nice knowing that someone else has the same ideas as I do!