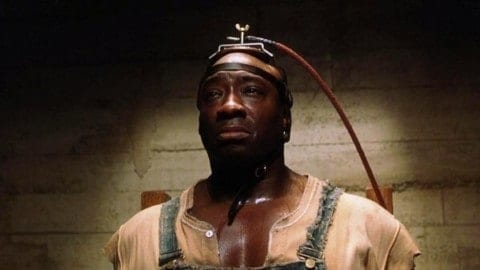 The Green Mile by Stephen King is a book about death, both in life and on death row in America. The book follows Paul Edgecomb who is the main Guard at the Cold Mountain Penitentiary on E-Block, or death row. While at his post he had carried over eighty executions, all but one of them he felt had been justified. The one where he didn’t was John Coffey; convicted, but not guilty of the rape and murder of two little girls. This raises the question, how can our justice system allow things like this to happen, and is any legal killing of another human ethical? Since 1973 “more than one hundred and sixty five innocent people have been acquitted from death row” (Innocence). One hundred and sixty five innocent people were going to be killed by our government. The Green Mile is not a book a book about injustice in America, at least not at face value, but it does a good job of showing it. It humanizes all the Prisoners on death row and makes the reader think that even with their heinous crimes they’re still human, they still have thoughts, dreams, and emotions like me. It makes the reader think who are we to decide who lives or dies.

Instilled in every American is the value of justice. From a young age we have this motto drilled into our heads, “with freedom and justice for all”, and with this you would think we have an impressive justice system to go along with this. This is simply not the case. Take for example the case of Clifford Williams Jr. who in 1976 was convicted of “entering a woman’s house with a spare key entrusted to him and then shooting her dead from the foot of her bed” (Kristoff) and sentenced to death. The thing was that forensics found that the bullet had been fired from outside and Mr. Williams had an aibi for where he was at the time of the murder. After spending forty two years in prison he was freed in 2018 to a completely different America. Some people aren’t lucky enough to get back into the world though. Just like The Green Mile depicts with John Coffey’s execution, hundreds of innocent Americans are killed by a broken system. With the Innocence Projects peer reviewed study claiming that about four percent of death row inmates are or were innocent, we are reminded how insignificant someone’s life can become in America’s justice system. Even one innocent person killed is too many.

The arguments for the death penalty may sound good at first; it’s cheaper to kill someone then to keep them in prison for life, it deters crime, and that criminals who commit these crimes desereve to die anyway. To discredit the first argument on average it cost’s seven hundred thousand dollars more to perform an execution on a person then to imprison them for life (Appendix IB1). The reason for this is that it takes a lot longer to perform a capital crime hearing and all appeals are automatic meaning cases can easily last decades. Towards the second point studies have been inconclusive at best. Some claiming that states that without the death penalty see less capital crimes, while others seeing a slight correlation between the death penalty and less crime. One thing that you can take from these studies though, is that the process of handing someone a death sentence is so random that it’s almost comical. Finally for the last argument consider Kenneth Reams who was sentenced to death at barely eighteen for being present during a robbery that went wrong. Kenneth was poor growing up with an absent mom and dad, and many mental health problems. He has spent nearly thirty years awaiting a new trial and by all accounts he has rehabilitated, should this grown man be killed for what his terrible situation forced him to do as a child? It’s more expensive, it doesn’t deter crime, and people can rehabilitate, the death penalty is outdated.

If you’re interested in the human side of the death penalty in America you should read The Green Mile. It does a good job of showing the significance the death penalty can have on all those involved. It inspired me to look into America’s justice system, where I found out the flaws with how we treat the death penalty. How four percent of all death row inmates are or were innocent (innocence). The book made me look at how it felt to Paul Edgecomb having to murder an innocent man, and how it made him look back on his past executions. The Green Mile made me question the American value of justice and how it only seems to be applied to a select group.