How much Trash Is In the Ocean?

Home How much Trash Is In the Ocean? 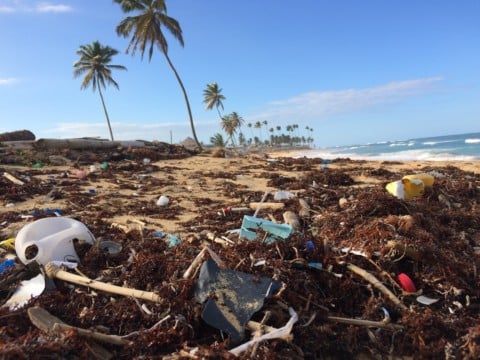 There is an astounding amount of trash in the ocean. National Geographic claims “there are 5.25 trillion pieces of plastic debris in the ocean” (Nat. Geo, 2019). The trash in the ocean is counted in three ways. The first is through beach surveys. Secondly, computer models are based on samples collected at sea. Thirdly an estimate of the amount of trash entering the ocean. These systems do not account for all the ocean’s trash. Which is even worse because that means there is more than 5.25 trillion. This trash is very bad for the environment. Some issues it causes is it transfers chemical pollutants, and it is a threat to marine life.

There is a patch of garbage called, The Great Pacific Garbage Patch that is a collection of marine debris in the North Pacific ocean. According to National Geographic, “About 54 percent of the debris in the Great Pacific Garbage Patch comes from land-based activities in North America and Asia” (Nat. Geo, 2012). I think that is sickening to even hear about. We are killing our home. This garbage greatly affects marine life and other aspects of the ocean.

One thing we humans need to do is use more biodegradable things so we can help with the trash in the ocean. The reason so much trash accumulates is that most everything is not biodegradable. Another way to help is by not getting your groceries put into plastic bags, the less disposable plastic the better. In conclusion, trash in the ocean is negatively affecting marine life and the way the ocean environment function. It is our responsibility to turn things around and reduce waste in our oceans.

I think that your post is well written and focuses on a major issue in today’s world that the global community overlooks. As you said, it is our responsibility to reduce waste in our oceans and turn around the marine pollution that human activities have caused. I agree that humans should use more biodegradable materials and use less disposable plastic in order to reduce the amount of trash in our oceans while also taking other steps. I think that it is important to inform more people about the significant environmental damage and harm to marine life that marine pollution causes in order to increase awareness, since this will enable the global community to have the most effective response and make the most progress in reducing marine pollution.

Katie, I’m so glad that you brought the focus back to such an important topic in our modern day. I feel that many people are vaguely aware of the immense amounts of plastic that exist in our oceans and global communities but always turn a cold shoulder to such an immense problem. As you said, such a “sickening” fact is hard to come to terms with and if we want to change we must first spread awareness, and I think this post is a great way to continue spreading that.

I enjoyed reading your thought about Marine pollution, Katie. Humans have done a lot of things that are irreparable to our environment. We live on land, but we do so much damage to the oceans. We should be ashamed of this. I think you are right that we should reduce the use of non-biodegradable materials and recycle the garbage that has been thrown out in the ocean. I know that non-biodegradable materials are in our lives that sometimes we have to use them but I think if we do a good job of recycling and sorting, things will be much better. Thank you for sharing, Katie.

Katie,
I think this is one of the most important topics to look into today’s world. Our oceans do so much for us and I believe that all the trash in the ocean is overlooked much too often. You did a great job talking about the “Great Garbage Patch.” It was very clear to see that you know what you are talking about! Another important thing that you did was offer a solution. Many people just say “hey this is a problem… I do not know how to solve it but it is a problem.” So, it really helped to have a solution offered. It really made the whole piece come together in a very informative way!

I thought this was very well written. I liked how you started very matter of factly and then gave a quote to really secure your claim. You also gave very good information about each thing you talked about. Specifically, when talking about the “Great Garbage Patch”, you gave a ton of facts and quotes to get the message across. I liked how you ended with a solution and a call for all people to take care of the word as citizens of the planet.